The bad thing about climate change — besides everything — is that it comes with a countdown. We don’t know exactly how much time we have or what will happen when that time runs out, but we do know that some people would rather live on Mars than find out.

Not Jessika Trancik. A materials scientist and professor of engineering at MIT, Trancik would rather help humanity beat the clock by speeding up the development of clean energy technologies and sounding the alarm when a technology looks like it isn’t going to scale effectively. In short, she’s a cleantech efficiency expert.

Whether it’s solar cells, wind turbines, electric vehicles, natural gas biofuels, or that “miracle energy” your uncle emailed you about, Trancik wants to know: what materials does it require, how much do those materials cost, how much would we have to use the technology in order to meet emissions targets, how much would materials extraction and refinement have to go up accordingly, how much would that cost, and — most importantly — is this a smart or realistic path to go down?

“It’s not a matter of can this technology scale up; it’s the question of can it scale up quickly enough to make a difference,” Trancik says.

To answer that question, Trancik and her research group use computer models that, needless to say, are very complicated. Here’s Trancik explaining what she does at a tech conference back in 2011:

And here’s a taste of what Trancik and her group have found in recent years:

Many see natural gas as a stopgap between the dirty energy of today and the clean energy of tomorrow. It emits way less CO2 than coal power, and the big bad greenhouse gas that it does emit during the extraction process — methane — doesn’t stay in the atmosphere for very long (a few decades compared to centuries for CO2).

Methane is about 100 times more potent as a greenhouse gas compared to CO2, but due to its short lifetime, it becomes less potent than CO2 about 67 years after emission. Here, CNG is compressed natural gas, and RF is radiative forcing (a measure of how much energy a gas traps in the atmosphere). Edwards and Trancik

That works in methane’s favor when scientists determine its so-called global warming potential (GWP). The GWP measures how much heat a gas traps compared to CO2 over a given period of time. People usually use 100 years as that time period, Trancik says, but if we’re trying to stop all the excess energy flowing into the atmosphere within 20 or 30 years, we shouldn’t be thinking on a 100-year time scale.

Instead, Trancik and one of her graduate students developed a new metric for assessing GWP that accounts for how far out that target “stabilization year” is and thus reflects the increasing urgency of our situation. With their metric, the benefits of natural gas decrease over time as we get closer and closer to the point of no return. “At current methane leakage rates, about half the advantage of natural gas over coal is lost within two decades,” Trancik says, meaning however good natural gas looks compared to coal now, it’ll look only half as good in 20 years.

2. Solar has already made its mark on history …

The cost of photovoltaics has plummeted at an unprecedented rate. Now, Trancik says, less than 50 percent of the price of a complete photovoltaic system is the actual hardware itself. The rest is all installation and support.

“If you look across the entire history of the modern energy conversion industry, it’s improved faster in terms of cost reductions than any other energy technology,” Trancik says.

The question is, what is it about photovoltaic technology that has led to such unprecedented cost improvements and how can other technologies follow suit? Trancik and her colleagues have a few ideas, but they haven’t published their findings yet. Stay tuned! 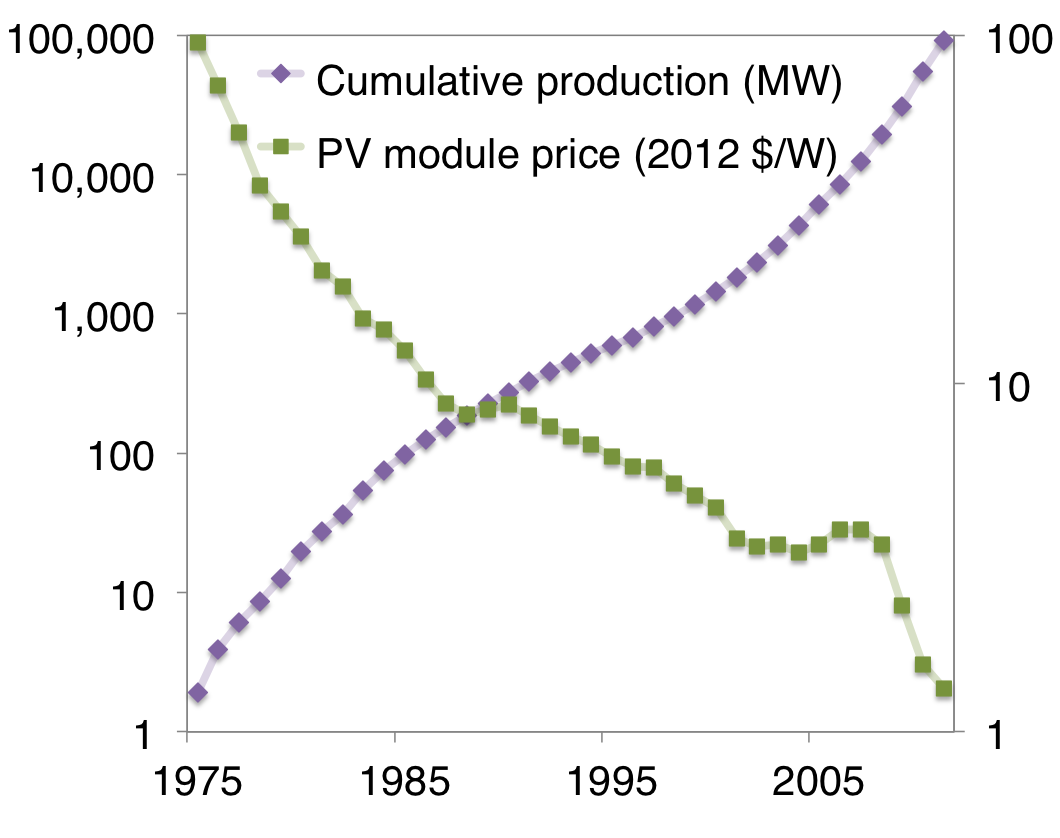 Kavlak, McNerney and Trancik (paper not yet published)

3. … BUT certain types of solar cells might be more trouble than they’re worth.

The good news is, due to plummeting costs and improving technology, the use of PVs is increasing at a rate of about 30 percent per year, Trancik reported in a paper published last year. The bad news is, if PVs using CdTe and CIGS are going to meet more than just 3 percent and 10 percent, respectively, of projected electricity demand in 2030, the production of tellurium and indium would have to rapidly increase at a rate never before seen in the metals industry (neither metal is very abundant in the earth’s crust, so both are currently only extracted as byproducts during other, more abundant metals’ extraction).

4. We’re in the midst of a cleantech patent boom (and that’s a good thing).

Even as government funding for energy research has declined, the number of patents related to energy technology has skyrocketed.

“So basically within one generation, and really most primarily in the last decade, we’ve seen this shift where there’s just a lot of innovative activity as measured by patents going into clean energy, solar, and wind. And while that may not be surprising, the scale of the effect is really interesting.” 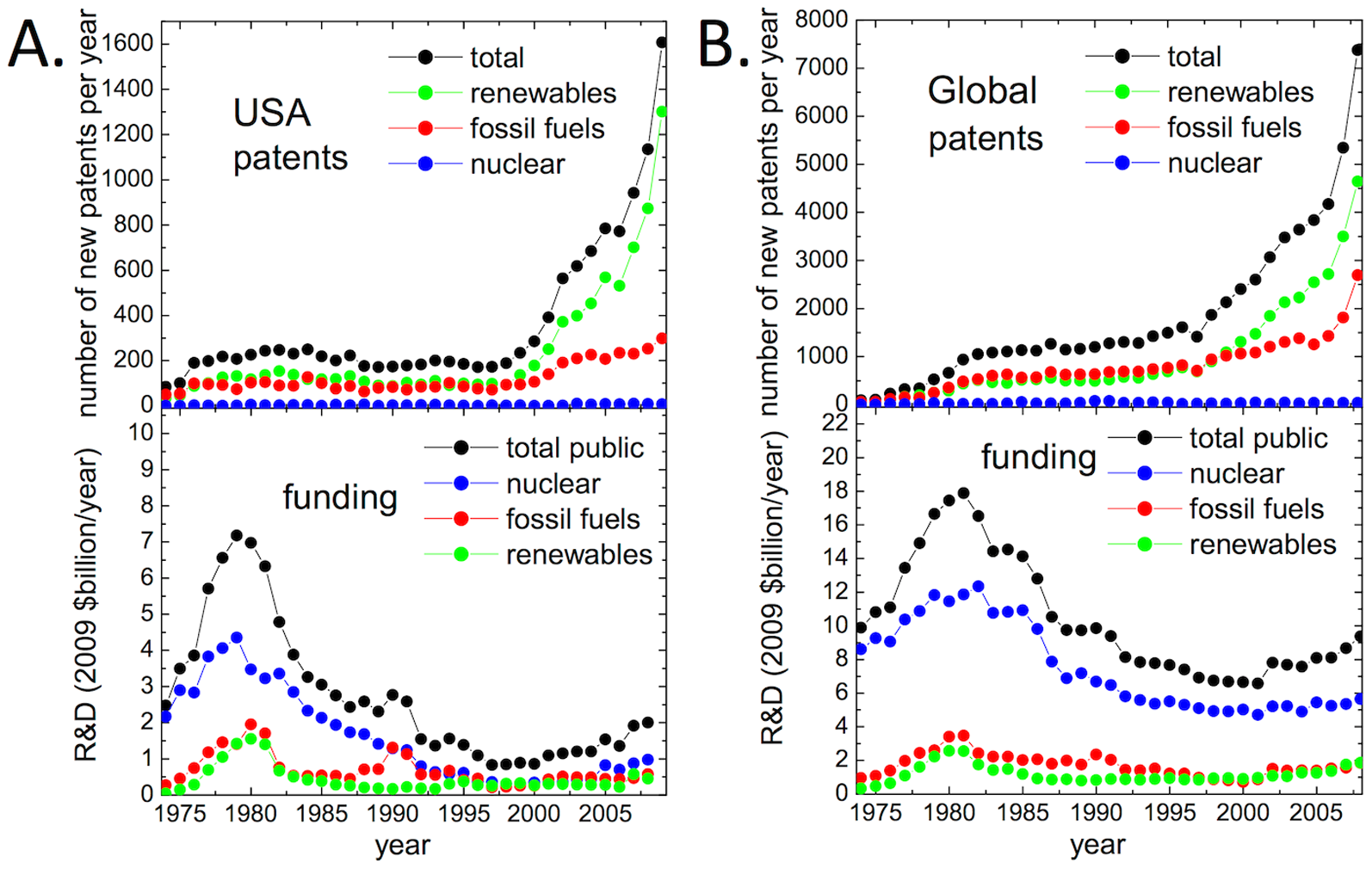 Trancik is also studying the development of energy storage devices and electric vehicle technology, but regardless of what she’s studying and what her findings are, she’s careful not to make any declarations about what technologies are or aren’t worth pursuing. She prefers to leave that up to the researchers.

“Our currency — our output — are academic papers. So we publish the academic paper, and then we’ll share it,” Trancik says. “I do see an increasing appetite for research papers among policymakers and also industries, so I think the more we can share those results and explain them and talk them through it, the better.”

Trancik says that her goal is to one day turn this kind of predictive modeling for energy technology into an entirely new field — like how the pharmaceutical industry uses computer models to expedite drug development. But for now, there aren’t enough people doing this kind of work.

“Research fields are most productive when you have a well-defined community and everybody’s working together, sharing results, questioning each other’s results, students interact with students of other groups. That’s the kind of environment we want to work for.”

Climate change is a security threat. Make it a foreign policy priority