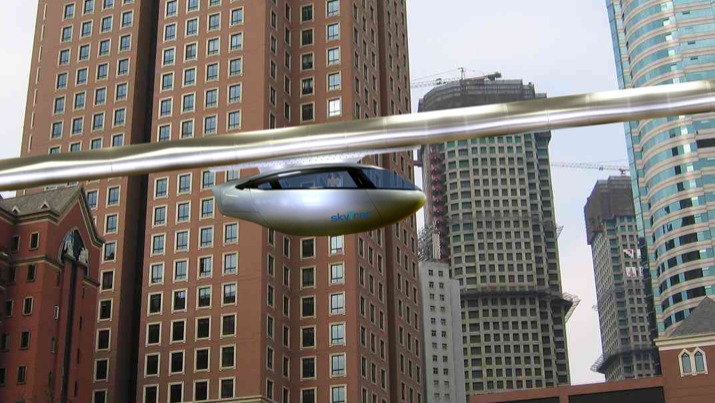 Usually when a defense contractor comes up with a wiz-bang gizmo, it’s the kind of thing that gives us nightmares, not think, “Man, I hope they bring that to my town!” But defense giant Israel Aerospace Industries is teaming up with California-based SkyTran to build a maglev system for its corporate campus in Tel Aviv.

The system uses small, two-person pods hanging from elevated tracks. You can order up a pod from your cellphone. Wired’s Alexander George has more:

As futuristic as [it] sounds (and looks), the idea has been around since 1990. It’s been suggested in cities ranging from Tempe, Arizona to Kuala Lampur, but the idea never got off the, er, ground.

Until now. … It’s a pilot program that could be expanded throughout the city, which has been looking at adopting SkyTran for awhile now.

Maglev trains glide under tracks using electromagnets to keep them afloat. The systems have massive benefits over conventional rail. Though they must still hook into the city’s power grid, there is no point-source pollution and the trains are essentially noiseless save the sound of the cars wooshing by. Because there is no physical contact with the tracks providing friction, they can reach staggering speeds.

The initial line, which could be up and running by the end of 2015, will be limited to 44 mph, but a broader system could reach 150 mph. The Tel Aviv system adds the individual cars to the equation, giving people some of the privacy they so crave in their cars, and the convenience of having a train ready whenever they want.

While the system isn’t yet operational, we were able to find this amazing video (quite possibly from the future) of a similar system in action.