A giant, 150-foot roll of bubble wrap may not be your idea of an environmentally friendly product, but over at Walmart.com this one-pound ball of plastic now boasts a special “Sustainability Leaders” badge. It’s one of more than 3,000 products tagged with this new green label, which Walmart executives unveiled last week, together with a web portal where shoppers can find these items.

Dozens of news accounts hailed the giant retailer’s move as a significant step toward clearing up the confusion and misleading information that often greet consumers trying to make ecologically responsible choices. “The world’s largest retailer took a major and important step toward helping all of us shop more smartly,” declared corporate sustainability consultant Andrew Winston in Harvard Business Review. Triple Pundit concurred: “It’s about to get a lot easier for Walmart.com shoppers to make the responsible choice.”

Actually, a green-minded online shopper is likely to find Walmart’s new badge confusing, murky, and downright misleading. I searched the bubble wrap’s product page high and low for its secret sauce, the invisible feature that makes it a smarter choice amid the many seemingly less harmful packing options available, but found no explanation.

It turns out that the key to this mystery lies in a remarkable disclaimer tucked into the middle of the home page of Walmart’s sustainability shopping portal: “The Sustainability Leaders badge does not make representations about the environmental or social impact of an individual product.”

Well then. Once again Walmart has engineered an appealing media story about itself as a green innovator that has little to do with reality.

Here’s how the retailer’s new badge works: Walmart awards the label to products made by companies that it deems to be sustainability leaders in particular product categories, such as plastic toys or dairy foods. Those that win the label get to use it on all of their products in that category, regardless of how harmful or toxic some items might be.

To decide which of its suppliers are “leaders,” Walmart sends them a survey with about a dozen questions. Neither the questions nor the responses are public. The only thing we know is that the questions were developed by the Sustainability Consortium, a collaboration funded by about 100 big-name companies and groups, including many of the world’s largest retail and consumer products brands. Launched with a seed grant from Walmart, the consortium is managed by the University of Arkansas and Arizona State University, both of which have deep financial ties to the company. Since 2009, the Walton family, the billionaire clan that owns more than half of Walmart, has donated at least $49 million to these two universities.

In addition to developing the surveys, the consortium has also produced fact sheets ostensibly designed to empower Walmart shoppers with usable information. I dug into several of these — including the one on plastic products, which I thought might shed some light on the bubble-wrap question — only to find uselessly generic statements punctuated periodically by a disconcerting phrase. For example: “Manufacturers should educate consumers about proper disposal [of plastic products] and participate in programs to recover end-of-life plastic for recycling into new products or use as a fuel source.” A fuel source?

The Sustainability Leaders badge is straight out of Walmart’s 10-year-old greenwashing playbook: Announce an initiative that the media is sure to (mis)interpret as a game-changer and then quietly fail to deliver anything close to the promise.

Indeed, we’ve been around this particular block before. In 2009, Walmart declared that it would, within five years, produce an environmental grade for every product on its shelves. News outlets ate it up. “Wal-Mart Stores is on a mission,” The New York Times reported. “The idea is to create a universal rating system that scores products based on how environmentally and socially sustainable they are over the course of their lives. Consider it the green equivalent to nutrition labels.” Six years have now gone by and no such rating system has materialized.

None of Walmart’s green initiatives have generated as much sustained public relations mileage as its oft-repeated pledge, first made a decade ago, to switch its U.S. stores to 100 percent renewable power. Today only 3 percent of Walmart’s U.S. electricity comes from its renewable energy projects and purchases, according to the EPA. Meanwhile, more than 40 percent of its power comes from coal, according to an analysis by the Institute for Local Self-Reliance (my organization). 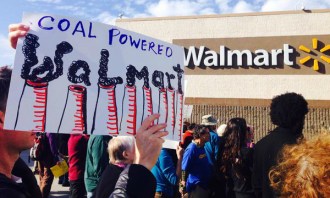 In the wake of last November’s massive protests at Walmart stores nationwide — during which environmentalists joined workers in calling the company out — Walmart executives now seem to be trying to pivot away from earlier promises. Last week, at the event unveiling the Sustainability Leaders badge, CEO Doug McMillon said Walmart was moving to the “next phase” of sustainability.

McMillon bragged that the company had already reached one-quarter renewable energy. That’s a misleading number. It’s a global figure that includes renewable power Walmart is pulling from the grid in countries like Canada (hydropower) and Brazil (hydropower and biomass). Here in the U.S., where coal-generated power is cheap, Walmart remains deeply committed to dirty energy and lags many other retailers in investing in solar and wind.

Walmart’s new green labels are more of the same — a way to keep the public conversation about the company’s impact confined within its own narrow terms, all the while obscuring the deep problems at the heart of Walmart’s business model. As Walmart has grown, so too has the scale of our consumption. Each year, we go through more televisions and T-shirts, blenders and desk chairs, than ever before, as big-box retailers undermine product quality and move an ever larger volume of shoddy goods from factory to store to house to landfill.

Just last month, Walmart told its suppliers they would have to find ways to cut costs even further, a directive that almost invariably entails cutting corners — exploiting workers, dumping toxins in waterways, making goods that won’t hold up. It’s an imperative directly at odds with sustainability. But never mind all that; I know where you can buy an eco-friendly roll of bubble wrap, cheap.

Stacy Mitchell is co-director of the Institute for Local Self-Reliance and runs its Community-Scaled Economy Initiative. Check out her TEDx talk, “Why We Can’t Shop Our Way to a Better Economy,” and connect with her on Twitter at @stacyfmitchell.