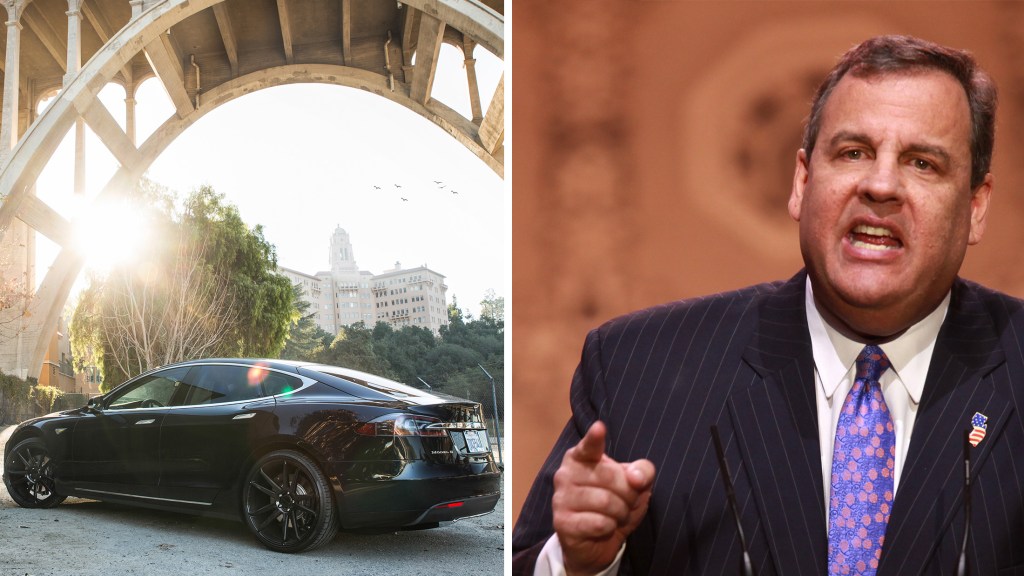 When it’s time to make another sequel to “Who Killed the Electric Car?,” Gov. Chris Christie (R) of New Jersey may get a cameo. The Associated Press reports:

The regulation, adopted Tuesday by the state’s Motor Vehicle Commission by a 6-0 vote, effectively prohibits companies from using a direct-sales model.

Tesla, which makes electric cars and sells them directly to consumers, will be forced to shut down its two New Jersey showrooms. Teslas are not carried by regular auto dealers, so New Jerseyans will now have to travel out of state to test drive or buy one. By cutting out the middleman of an independently owned auto dealership, Tesla has been able to make its cars more affordable. (Electric cars cost more than conventional ones — Teslas in particular — but some of the difference can be recouped over time with savings from not having to buy gasoline.)

Tesla criticized the commission’s move as “an affront to the very concept of a free market.” New Jersey environmentalists are criticizing it too, saying it’s part of the Christie administration’s larger anti–clean car agenda. Last year, Christie vetoed a bill that would have created a task force to eliminate barriers to alternative-fuel vehicles. (Technically he issued a conditional veto, but his conditions were unacceptable to legislators, thus making it a veto in practice.) Christie also opposed tax incentives for businesses such as shopping centers to create electric car charging stations.

In this case, the Christie administration wrote and adopted a new regulation to enforce a longstanding law that requires all cars to be sold by dealers, not carmakers themselves. The New Jersey Sierra Club believes Christie is trying to do more than just enforce the law; the group sees this as a step toward wriggling out of auto fuel-efficiency standards. New Jersey adopted a “Clean Cars” law in 2005 that requires it to follow the same fuel-efficiency standards as California, which are higher than those set by the federal government. New Jersey Sierra Club’s director Jeff Tittel worries that a lack of Tesla sales could prevent the state from reaching the law’s benchmarks. (The standards are for average fuel efficiency across all cars sold, so each Tesla helps balance out less efficient cars.) “What they’re going to do next, they’ll say, ‘Without Tesla we can’t meet [the standard], therefore we should delay the implementation,’” says Tittel. “In New Jersey, paranoia is a premonition. You can just see the steps coming.”

When contacted by Grist, Christie’s office did not respond to the larger environmental critique, but addressed the auto-dealer requirement, arguing it would be improper to make an exception for Tesla. “Since Tesla first began operating in New Jersey one year ago, it was made clear that the company would need to engage the Legislature on a bill to establish their new direct-sales operations under New Jersey law,” said Christie spokesman Kevin Roberts in an emailed statement. “This administration does not find it appropriate to unilaterally change the way cars are sold in New Jersey without legislation and Tesla has been aware of this position since the beginning.”

New Jersey ought to totally repeal the law requiring cars to be sold through dealers, and not just for Tesla’s sake. There is no reason for the status quo besides guaranteeing a revenue stream for auto dealers. “These laws, bans on direct sales to consumers, usually were adopted at the request or influence of the auto dealer lobby, which is extremely powerful,” says Jennifer Kim, state director of NJ PIRG. Auto dealers are also a lobby with a long record of hostility to alternative-fuel vehicles. “They were our biggest opponent on the Clean Cars bill,” says Tittel. “They almost blocked it.”

The only thing resembling a public-interest argument from dealerships is that the public needs a guide through the complexity of buying a car. Consumer advocates view this as outdated in the internet era of easy comparison shopping and online reviews. NJ PIRG says the law should be revisited, but through an open legislative process. Consider it a rare point of agreement between the group and Christie. The Christie administration says it is open to changing the law, but would want to see what the specific legislation looks like.

It is unclear why the Democrat-controlled legislature of New Jersey has not introduced a bill to update the auto sales system and permit Tesla’s direct-sales model. Certainly it would irritate local auto dealers, but it ought to make consumers, who could save considerably on other cars besides Teslas, quite happy. Calls to several New Jersey Assembly members about this issue went unanswered.

Tesla believes that the current law did not require the NJ Motor Vehicle Commission to act in the time and manner it did. “Governor Christie’s administration has gone back on its word to delay a proposed anti-Tesla regulation so that the matter could be handled through a fair process in the Legislature,” the company wrote in a blog post. “Having previously issued two dealer licenses to Tesla, this regulation would be a complete reversal to the long standing position of NJMVC on Tesla’s stores. Indeed, the Administration and the NJMVC are thwarting the Legislature and going beyond their authority to implement the state’s laws at the behest of a special interest group looking to protect its monopoly at the expense of New Jersey consumers.”

This problem is not unique to New Jersey. Tesla is struggling with similar laws across the country, as Bloomberg reports: “Dealers in Texas and Arizona lobbied for the nation’s toughest restrictions on direct sales to consumers, and the success of incumbent dealers in those states seems to be emboldening dealers elsewhere. The anti-Tesla movement is now mobilizing in New York, Minnesota, and Georgia. The next battle could be decided in Ohio, where Tesla officials are scrambling to reach a compromise on a bill that would keep it from expanding beyond its current two stores in the state.”

Last year, Boston Globe columnist Tom Keane noted, “Every state requires auto sales be handled by independently owned auto dealers. Manufacturers are prohibited from selling their own products. That alone means that auto prices are about 6 to 9 percent higher than need be, according to a 2009 report by the Department of Justice. … In Massachusetts, the state dealers’ association sued to shut down Tesla’s Natick showroom. Late last year it lost in court — but continues to lobby the Legislature.”

It’s certainly not the case that the public enjoys some higher level of service from independent auto dealers. There’s a reason car salesmen are pop culture’s stereotypical manipulative swindler. In this situation, they are swindling not just New Jersey car buyers, but everyone affected by air pollution and climate change.