Which plants will survive climate change? This greenhouse could have the answers 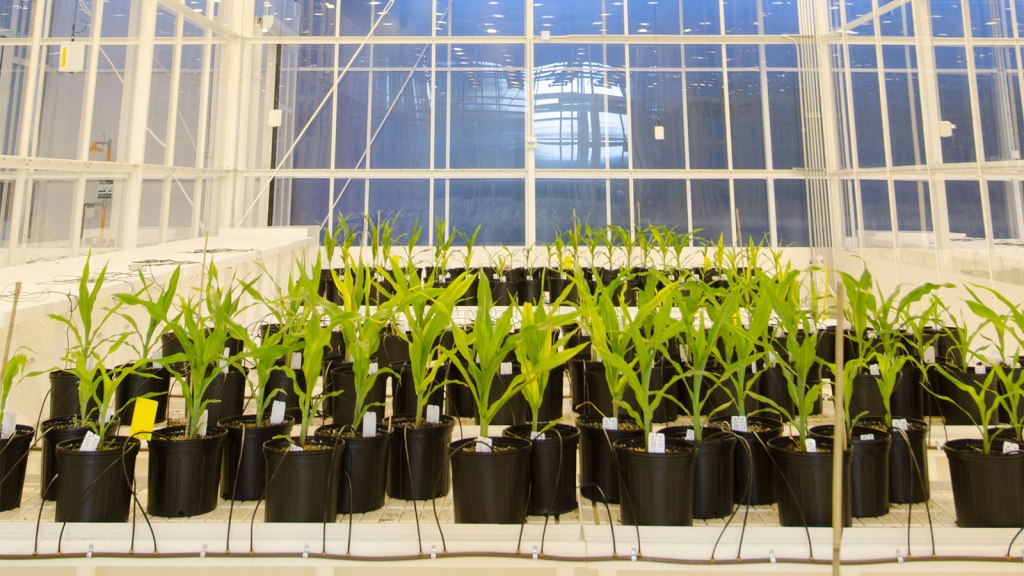 Which plants will survive climate change? This greenhouse could have the answers

In Durham, N.C., there’s a biotechnology lab where scientists are figuring out who will win, and who will lose, in this climate change game — in the plant kingdom, that is. They do it by tightly controlling the climate inside each room of a high-tech greenhouse — we imagine this involves giant red buttons, levers shaped like lightning bolts, and maniacal laughter — and observing how different strains of various crops fare.

The company is Swiss-owned Syngenta Biotechnology. Syngenta’s multi-million dollar facility allows researchers to simulate a sweltering drought in one room, program another to mimic Sub-Saharan African weather patterns, and manipulate soil conditions in another.

In a recent article in Wired, Mary Beth Griggs reports on how this greenhouse of the future works:

The roof has two layers, separated by an inch of argon gas to help keep the hot rooms hot and the cool rooms cool. And because perfectly clear glass creates hot spots and shadows that can interfere with experiments, a hazy coating on the interior layer diffuses the incoming rays.

Researchers can tweak humidity, oxygen, and CO2, even mimicking hour-by-hour weather patterns based on historical (or projected) data. They can also control temperatures within 2 degrees Celsius — ducts circulate the air for an ultra-­uniform distribution.

As geek-out worthy as this technology is, it’s worth pointing out that Syngenta specializes in developing and selling a wide range of insecticides, fungicides, and herbicides. In 2013, the company raked in upwards of $15 billion.

So, those climate controlled chambers are really a way of micromanaging the company’s fiscal future. You know, prepping for climate change now so that it’ll reap the financial harvest when things really start heating up.