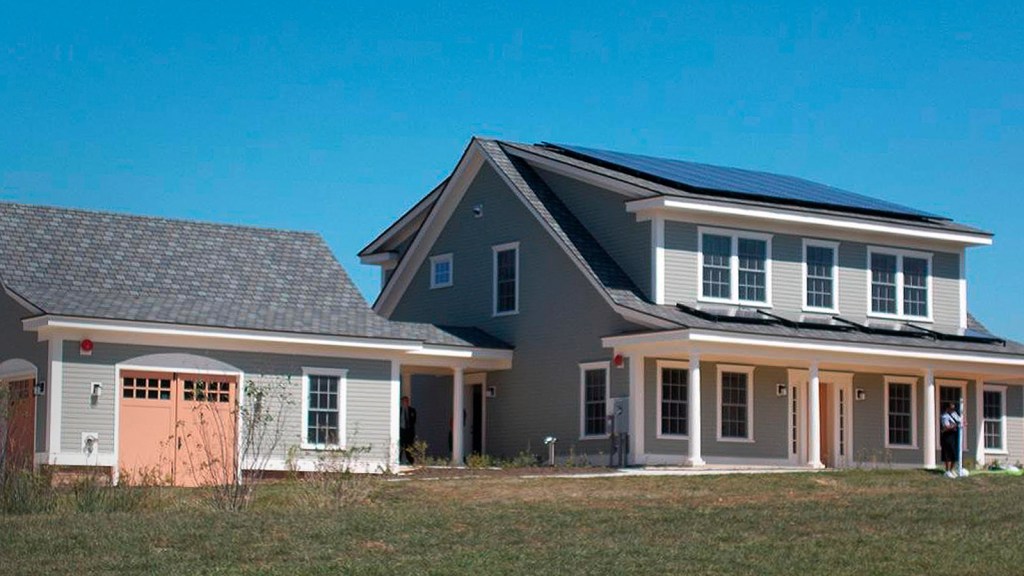 Wondering what houses will look like in the future? Wonder no longer! Gaze upon the net-zero energy test house built by the National Institute of Standards and Technology (NIST)! Gaze, I say!

Have you gazed yet?

OK, so houses in the future will look exactly like every other boring house in the dull neighborhoods replacing amber waves of grain from coast to coast. And as far as it goes, that’s a good thing. People love boring. Community associations love boring. Boring is sexy. If it looked like an H.R. Giger fever dream people wouldn’t build them.

This particular house was built to do everything the typical American family of four does and end up using zero net energy, and after a year, it turns out it didn’t quite work out: Despite massive snowfalls and a rough winter, the home actually produced 441 more kilowatts of energy than it used, enough to drive an electric car over 1,400 miles — which, considering the house was built in Maryland’s D.C. suburbs, the most boring place in America, might be far enough to get you someplace interesting.

This boring video has more:

The house was built to the U.S. Green Building Council’s LEED Platinum standards and is estimated to be 70 percent more energy efficient than the average D.C.-area home. Built with double the normal amounts of insulation, an air barrier to minimize temperature exchange with the outside, and 32 solar panels, the home is estimated to have saved its imaginary residents $4,373 very real dollars over the course of the past year.

With a cost estimated at $132,700 over a similar home built to standard, um, these technologies don’t come cheap. But as the technologies mature and become more commonplace, the price will come down. With California’s Title 24 requiring all newly constructed homes to be net-zero beginning in 2020, these boring houses are about to become a lot more commonplace. Which is pretty exciting, really.

Now where do we plug in the minivan?