This is part 1 of a short series about bicycles in Copenhagen. Read parts 2 and 3.

The first thing that struck me, climbing the steps from the train station into the city of Copenhagen on a recent Wednesday morning, was the great abundance of bicycles. The street outside the train station had been converted into a chaotic, open-air bicycle parking lot, with bikes stacked on double-decker racks. Bikes lined every sidewalk, stood two- and three-deep against the old stucco and brick facades, and leaned against every lamp and signpost.

The second thing that very nearly struck me was someone riding a bike. I was crossing a square en route to my hotel, lugging my bags, when I heard, behind me, the jolly “jing, jing!” of a bike bell. Back home in Seattle, bike bells are quaint — a pleasant way to give fellow bikers and pedestrians a gentle “heads up — coming through.” Not so much in Copenhagen.

As the cyclist swerved around me he muttered something about a “bike track.” A second bell rang behind me and I realized, suddenly, that I was walking in a bike path that cut through the square. I shuffled as quickly as I could out of the way, realizing that here, a bike bell should be taken as seriously as a car horn.

Such was my introduction to Danish bike culture. I was in Copenhagen for four days with a group of travel bloggers, the trip paid for by Denmark’s tourism bureau, which is trying to promote Copenhagen as a destination for bike tourism. (I generally avoid such junkets. They make me feel dirty. But this one seemed too good to pass up, and with a little arm-twisting, my editor consented to let me go.)

I wasn’t the first bleary-eyed American to nearly get mowed down by a bicyclist upon arriving in one of Europe’s bike capitals. Pete Jordan describes a similar experience in the opening chapter of his book, In the City of Bikes: The Story of the Amsterdam Cyclist. Nor was I the first American to be blown away, befuddled, or generally wowed by the number of people who ride bikes in these cities. Jordan (you may know him as Dishwasher Pete) reveals that we Yanks have been ogling European bike culture (and the toned legs of European bicyclists) for 100 years or more.

But there’s no shame in that. The ogling is good here! In a jetlag-induced haze, I spent my first day in Copenhagen wandering the streets, swilling espresso at sidewalk cafes, and checking out the bikes and the people who rode them. I learned a few things in the process. 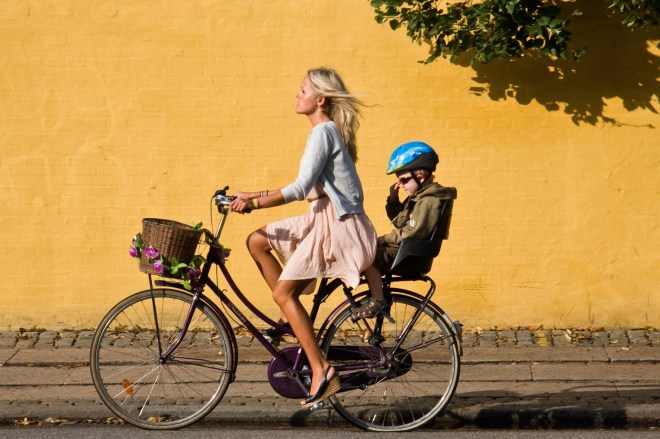 For starters, the bikes: When I think of European bikes, my mind immediately leaps to the Tour de France, which happened to be in progress when I was in Copenhagen — think $10,000 carbon fiber, pedal-powered crotch rockets. But there were no racing bikes here. Instead, the urban peloton lolled along on (mostly) black cruiser bikes decked out with wind-catching fenders over the wheels, plus jaunty wicker or metal baskets up front, utilitarian racks in the back.

And while the streets were remarkably free of car traffic (turns out that most of Denmark was on holiday at the time) there was the constant, tinny squeak of a thousand rusty bike chains. I’m not talking about a little russet stain on just a few chains; almost without exception, these chains were absolutely encrusted with rust.

Later in the week, when I pointed this out to Mikael Colville-Andersen, the man behind the Copenhagenize and Cycle Chic blogs, he just laughed. “It’s a vacuum cleaner,” he said of a bike. The implication: A bike is a tool, something that does the job of getting you from one place to the next — not something to pamper and obsess over.

Of course, there’s another reason that locals allow their bikes to fall into such disrepair: Copenhageners are a trustworthy lot, the guidebooks will tell you — except when it comes to bikes. A shiny, well-tuned ride is apt to become a target for thieves. And if your bike is likely to be ripped off at some point anyway, there’s no sense in babying it. (Dishwasher Pete describes Amsterdam’s stolen bike economy in great detail in his book, which, if you care at all about bikes, or just want a unique window into European history, is well worth the read.)

A wild menagerie of utility bikes also thread through this old city. The most common variation is a three-wheeled cycle with a large box up front — Copenhageners call them Christiania bikes, as many of them are made in Christiania, the city’s hippie quarter, where squatters took over an old army barracks in 1971 and never left. These bikes are used to haul all manner of cargo, from flowers to dogs to people. A Christania bike can accommodate a couple of kids — I saw four of them packed into one — and it isn’t uncommon to see an adult folded into the bucket, enjoying a ride across town.

There are a few high-tech variations on the cargo bike. Colville-Andersen let me take his Danish-designed Bullitt for a test drive later in the week. He also gave me a ride across town in the bucket. Which brings me to the bicyclists — and back to the ogling. Copenhagen’s bike riders range from toddlers just finding their legs (wheels?) on pedal-less starter bikes (I didn’t see a single tricycle or set of training wheels) to elderly men and women who navigate the city center right along with the city’s youthful masses.

A great many of the bikers on these streets, though, are tall, blond, and beautiful. I found the homogeneity to be a little disconcerting — since, in my mind, a city’s health is measured in large part by its racial diversity. But if there’s one place one would expect to find an overwhelming preponderance of Northern Europeans, it’s in, well, right … (Of course, lest you think that race and general tolerance of others is not an issue here, I would call your attention to a certain cartoonist.)

Almost none of the people riding bicycles in Copenhagen had gone out of their way to “dress for biking.” Few wore helmets (more on that later), and of the thousands of cyclists I saw in the city, I could count on one hand those who were wearing Spandex. (Ten bucks says they were Americans.) The men rocked jeans or business attire, and many of the women wore skirts — long, short, and almost non-existent.

When my wife wondered, via email, what the secret was to riding in a skirt without revealing your delicates to all the world, I put the question to our tour guide, a young Copenhagener named Christina who now lives in New York City. Again, I got laughed at. “Remember,” she said, “we’re Scandinavian.” Translation: Just hike up your skirt and ride, girl!

Just as remarkable as the people riding the bikes were the things they did while riding: They talked on cellphones, smoked cigarettes (Copenhageners smoke like chimneys — “but we still live until we’re 85, because the biking cancels it out,” one local told me), sang, held hands, gesticulated with both hands while cruising along, top speed, talking to a friend on a neighboring bike. And I didn’t see a single one of them wipe out.

As Colville-Andersen suggested, bicycles sit at the heart of urban living in Copenhagen. These people were as comfortable on their bikes as we are in our cars in the states. But, as I learned later, it hasn’t always been that way.

Giant Galapagos tortoises, once extinct in the wild, retake island from invasive rats