This just in: We no longer have to choose between living in the city or the forest. A pair of new towers in Milan, Italy, proves that we can have it both ways.

The project, called Bosco Verticale (“vertical forest” in Italian), combines residential, office, and commercial space with a vertical woodland of 800 trees, 4,000 shrubs, and 15,000 other plants like vines and perennials. This sprawl-fighting eco-development just says “no” to the idea of separate, enclosed green spaces, instead integrating plant life into the built environment — an important step forward for the movement to desegregate humanity and nature. 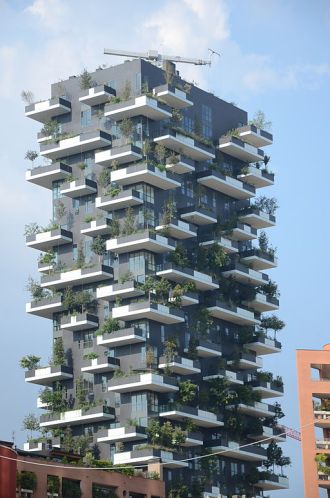 Stefano Boeri, the project’s designer, says that its living façades upgrade the Porta Nuova district’s microclimate by, well, being plants — increasing humidity, providing homes for birds and other critters, inhaling CO2, exhaling oxygen, cooling the urban heat island, and adding some green gorgeousness to the cityscape.

The two towers — one 260 feet and the other 367 feet — house a lot of life on a little surface space, greening urbanity while indirectly preserving less-tampered-with wildlands. On less than one already-urban acre, the bio-buildings accommodate plant life equal to a 2.5-acre forest, as well as residents that would occupy more than 12 acres in single-family detached dwellings.

The terraced greenery provides a natural thermostat, limiting the buildings’ energy consumption. Even better, it’s irrigated with greywater that occupants have sent down the drain. And to produce some of the power it uses, the sky-scraping forest also sports an array of solar panels.

Finally, you can hunt and gather right out the door of your high-rise apartment, but beware the neighbors.