The way most cities handle garbage is a mess.

In Los Angeles, for instance, businesses and owners of apartment buildings pick their own waste collectors. The result is that garbage trucks take overlapping routes, criss-crossing paths on collection day. One block alone might see a dozen diesel-burning garbage trucks pass by, belching harmful particulates as they go. And once those trucks reach sorting facilities, worker safety can vary wildly: Some facilities are clean and workers have vacation time and health insurance; others lack basic gear like sorting gloves.

The competition gives waste companies an incentive to keep costs low, which can be good for customers’ bottom line but terrible for environmental and labor standards.

Now, thanks to an alliance of environmental and labor activists, Los Angeles is revamping the entire process for collecting and processing commercial waste to make it less dangerous and less polluting. And other cities have joined them. In August, New York City Mayor Bill de Blasio proposed an overhaul of commercial-waste collection similar to L.A.’s, aiming to curb truck traffic and carbon emissions. Seattle and San Jose have already implemented similar plans.

Seven years ago, the Los Angeles Alliance for a New Economy (LAANE) set out to transform the city’s system.

LAANE worked with the Sierra Club, Earthjustice, and other environmental groups that wanted fewer trucks on the road and a mandate that trucks run on alternative energy. They also teamed up with labor organizations that wanted workers processing trash to get good benefits and higher-than-minimum starting wages. Together, they urged the city council to rewrite rules so that companies that meet alternative-energy and worker-friendly standards would get exclusive city contracts in what’s called a franchise system.

“There was an opportunity for a potential green economy that would pay living wages,” says Rob Nothoff, who directs LAANE’s Don’t Waste LA campaign. “And it was a chance to highlight these invisible workers as the frontline of the movement.”

The city council adopted a plan in 2012 that met many of these goals. It replaces the open-market free-for-all by dividing the city into 11 zones with trash haulers bidding for exclusive rights to each. That should translate into fewer trucks and cleaner air. But it won’t take effect until next year.

Under the new system, waste companies must commit to certain labor and environmental standards like using alternative fuels in their trucks and maintaining a comprehensive safety and training plan for their workers. That covers the people who pick up commercial trash as well as those who sort through it at recovery facilities. 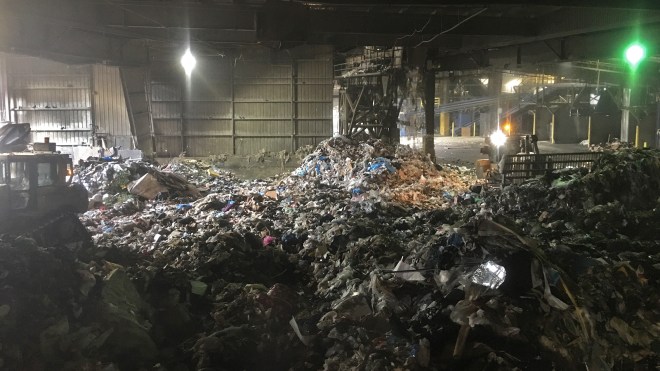 These sorters usually sift through coffee grinds, bottles, and the like, but occasionally they discover hypodermic needles, guns, and even dead bodies, according to workers at two facilities in the L.A. area. In some non-union facilities, workers sort through all this stuff with their bare hands. They often don’t get breaks, or find their break rooms crawling with cockroaches when they do. Conditions like these lead to more accidents on the job. In 2012, the state fined one Los Angeles company $40,000 for 36 citations, saying conditions at the company’s facilities placed workers’ lives at risk.

In exchange for meeting the new standards, trash haulers get exclusive, 10-year contracts, instead of having scores of contracts for varying lengths. The Department of Public Works recently approved the first batch of contracts for $3.5 billion.

Some organizations are upset about L.A.’s new direction. The Los Angeles Area Chamber of Commerce argues that the franchise system will limit competition and lead to labor disputes and garbage strikes. It says many smaller collection companies might not survive. (The Chamber declined interview requests from Grist.)

Jose Huizar, a member of L.A.’s City Council who championed the new system, disputes the idea that it’s unfair or likely to hurt small businesses. “Three of the 11 zones in the franchise are smaller in size, specifically intended to be accessible to mid-size firms,” Huizar says.

Waste workers who spoke to Grist say they like the new model because it values safety and labor standards. Maurice Thomas, a diesel mechanic who works at a facility in Long Beach, California, says the contracts translate into job stability.

“If my company gets a bid,” Thomas says, “that means 10 years of employment I don’t have to worry about.” His employer, Republic Services, already uses natural gas in its trucks instead of diesel and prioritizes the safety of its workers – two important criteria under the new system. Soon after we talked, Republic Services found out it was in line for a contract.

Why the heck are there pig farms in the path of hurricanes?