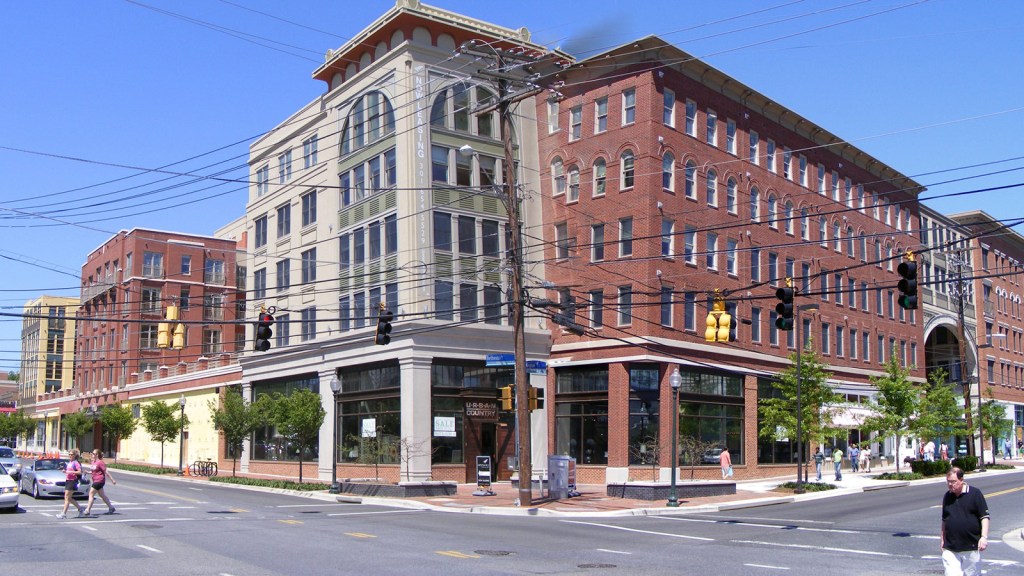 Bethesda, Md., is known on the East Coast as a bastion of civilized suburban affluence. Technically not a town but an unincorporated area of Montgomery County, it sits just across the border from Northwest Washington, D.C.’s leafy, wealthy residential enclaves. Bethesda, like Montgomery County generally, is known for its high home prices and first-rate public schools.

Part of the secret to Bethesda’s success is that it has been ahead of the curve on implementing smart growth strategies. Montgomery County has long been developing walkable urbanism around transit hubs in places like Bethesda and nearby Silver Spring. Since the housing bust of 2008, sprawling exurbs around D.C. have seen housing values plummet while the city and denser inner-ring suburbs, like Bethesda, have seen rising demand.

Downtown Bethesda consists of a few blocks near a stop on D.C. Metro’s Red Line, and it’s been changing dramatically in recent years. There’s a new pedestrian arcade lined with shops. Bethesda Avenue, with an expanding array of restaurants, is more bustling than ever. A dusty construction site rattles with the sound of turning a former parking lot into a mixed-use development that will feature stores at street level and apartments above. If all goes as planned, the Purple Line, a new branch of Washington, D.C.’s Metrorail system, will soon stop right in the heart of downtown, in a new station with a pedestrian connection to the Red Line.

It may sound like an organic process, but in most suburbs, even in most of Bethesda, such developments would violate the zoning codes that mandate detached, single-family homes and ample parking. Creating walkable urbanism requires removing those barriers. Although the Montgomery County government is resistant to doing so wholesale, it has over the last few decades rezoned areas around major transit hubs to allow increased density, embrace a vibrant mix of uses, and remove minimum parking requirements.

The state government is helping Montgomery and neighboring Prince George’s County with strategic investments in mass transit, sidewalks, and bike lanes. It’s ponying up some of the money for the Purple Line. The state is also offering grants to spur concentrations of business and housing development, and it provided the Bethesda Theater — an Art Deco edifice that serves as one of the downtown’s few landmarks — with a historic tax credit.

“Montgomery County was a leader in smart growth before we even talked about it at a state level,” says Richard Hall, Maryland secretary of planning.

Maryland has been home to some of the leading experiments in New Urbanist architecture, such as the planned community of Kentlands. But what’s happening in Bethesda and other nodes around Metro stations is different from typical New Urbanism, which deploys traditional walkable design in new greenfield development. The interior D.C. suburbs have already been built up in the standard sprawl fashion, and the challenge now is to retrofit them into sustainable communities. Thanks to the D.C. region’s strong economy, Montgomery is among the nation’s richest counties. How can the rising demand to live there be accommodated with environmental sensitivity, rather than paving over the last remaining farms or driving up prices? The only answer is to enhance density and walkability in the nodes around transit hubs.

“Downtown Bethesda was suburban — the Giant [supermarket] had a huge parking lot. It was a sleepy town,” says Montgomery County Planning Director Gwen Wright. “When the Metro came [in 1984], it was a revelation.” In 1994, the county adopted a zoning code that allowed taller buildings near the Metro station and gradually-shorter ones, sloping downward like a tent, as you move away from it. Recent revisions to the zoning code go a step further, raising allowable heights still more in parts of the downtown and instituting parking maximums there to reduce the amount of space wasted on cars.

“It’s about filling in the gaps,” says Wright. “We want to have surface parking lots near the Metro go away. We should be putting parking below grade, not wasting surface space. Every lot could be [a building] or open space.” In order to incentivize that kind of smarter development, the county offers a density bonus, meaning that you can build a bigger building, to developers who put their parking below ground instead of at street level.

The flip side of all this densifying is a plan to preserve open space in the county’s periphery, so that it does not wind up all asphalt. In 1980, Montgomery changed its rural areas’ zoning from one house on every five acres to one house per 25 acres, which is the minimum needed for a small farm. But owners of rural properties were allowed to sell development rights elsewhere in the county, based on the amount of development that would have been allowed on their land under the old zoning. So if you own a farm on 25 acres, you could sell to a developer the right to build four homes in downtown Bethesda. Through these transfers of development rights and easement purchases, the county has protected 70,000 acres of farmland.

Montgomery County is not an outlier in Maryland. The state has been a leader in smart growth policy for decades. Its outgoing governor, Martin O’Malley (D), has supported smart growth statewide, through investing in mass transit and transit-oriented development and protecting existing open space. “I grew up in Montgomery County, so some of my happiest days were spent romping around the woods across from where we lived,” says O’Malley. And so he understands the value of protecting natural areas by concentrating development in more urban ones.

One of O’Malley’s predecessors, Parris Glendening (D), created the nation’s first statewide package of smart growth policies, and he now serves as president of Smart Growth America’s Leadership Institute. When Glendening came into office in 1995, the state was spending most of its infrastructure money where new housing was going up in the exurbs. He had also experienced difficulty in trying to preserve historic buildings in Hyattsville, a D.C. suburb, when he served on the city council. Glendening recognized that putting the best new infrastructure in distant exurbs encouraged sprawl, so he led the state government toward renovation and reuse of existing buildings and public infrastructure. “We shifted state resources from building new schools, sewers, and roads to supporting existing ones,” says Glendening. They also made business tax credits for bringing in jobs dependent on businesses’ locations being consistent with counties’ growth plans, to help counties concentrate their office and retail development in transit-oriented hubs.

Glendening credits O’Malley with expanding the state’s smart growth policies. “Within a few months of [O’Malley] taking office, he asked [Smart Growth America] to come in and work with his cabinet on taking smart growth to the next level,” says Glendening. Out of that grew regulations and tax incentives geared toward smart growth development. O’Malley also made a major push for expanding suburban commuter rail in the D.C. and Baltimore regions.

There have been tensions, though, in keeping all of the different state agencies pulling in the same direction. In October, Glendening led local media on a tour around the White Flint Metro station, a few stops past Bethesda, to show how the major roads there are unconducive to walking. “The community asked me to come out and do this walking tour and literally point to what was right and what was wrong,” says Glendening. “There are things like telephone poles in middle of a crosswalk.” In its planning for the area, the state government has not focused on walkability, bike-ability, or orientation toward the Metro. And because the main road through the area is a state road, the county doesn’t have much control.

State officials do not rebut Glendening’s criticism so much as they ask for patience. “State roads have traffic standards to move traffic,” says Hall. “They were not meant to be downtown streets, so we’re working to adapt them to serve multiple purposes.” But the state has done better in Bethesda, for example, where Wisconsin Avenue, a state road, is one of the main thoroughfares. The Metro Station faces it, and now there is a median strip, street trees, and street parking along the road — all features designed to enhance the pedestrian experience.

White Flint looks nothing like that. The Metro station leads you onto Rockville Pike, a wide, desolate road with stores set far apart and back from the street in a sea of parking. The county’s plan for White Flint calls for creating a “thriving, diverse mixed use center with highest intensity closest to Metro and along Rockville Pike,” but they’ve got a long way to go. There are few pedestrians, and no wonder — within a block of the station, one sidewalk dead-ends and a walker would have to zigzag into the front yard of a federal office building to keep going. A tall, shiny new apartment building above an L.A. Fitness and a CVS looks out of place. But it’s a sign of things to come. As Glendening is pleased to note, the state Department of Transportation just agreed to reduce the number of lanes at a crucial road intersection in White Flint.

The biggest threat to Maryland’s smart growth is not sclerotic bureaucracy but political change. Republican businessman Larry Hogan won November’s gubernatorial election and he’ll assume office on Jan. 21. Hogan takes a predictably dim view of transit. He has already threatened to ruin one of Maryland’s best plans: the Purple Line, which is meant to connect the string of inner-ring suburbs in Montgomery and Prince George’s counties, from Bethesda in the west through Silver Spring to New Carrollton in the east. Currently all of these areas are connected to downtown D.C. by Metro lines, but not directly to one another. Such is the unintended consequence of a typical hub-and-spoke transit system. It makes lateral commuting — like from Bethesda to New Carrollton — very difficult without a car. The federal and state governments have laid out a plan to connect these suburban stations via the Purple Line, but Hogan has declared it a waste of money that would be better spent on building roads in the state’s rural fringes. “The priorities are out of whack,” he told The Washington Post in December. “Less than 10 percent of the people use mass transit. Most people in the state want the roads to be fixed.”

Hogan’s ability to undo pro–smart growth state laws will be limited by the large Democratic majorities in both houses of the Maryland state legislature. But his ability to veto spending bills means that he can halt progress on major investments. As a Republican, he isn’t likely to be swayed by arguments about mass transit benefiting the environment or social justice. But perhaps he could be persuaded if state and local businesses make a strong case that the Purple Line would benefit the region’s economy.

Glendening hasn’t given up hope. “I’ve known Larry Hogan for 30 years,” he says. “I don’t believe he’s anti– or pro–smart growth. It’s not on his radar screen. Decisions like the Purple Line will be made independent of that, but have significant impact on the smart growth program. The Purple Line connects the growth hubs of the suburban economy. Hopefully the business community [will convince him].”

But even if Hogan remains unconvinced, his tenure will only delay Maryland’s progress, not halt it. The state has embraced a better way of building, and it’s working.