Mountain View to Google: Take your techno-utopian factory town and shove it 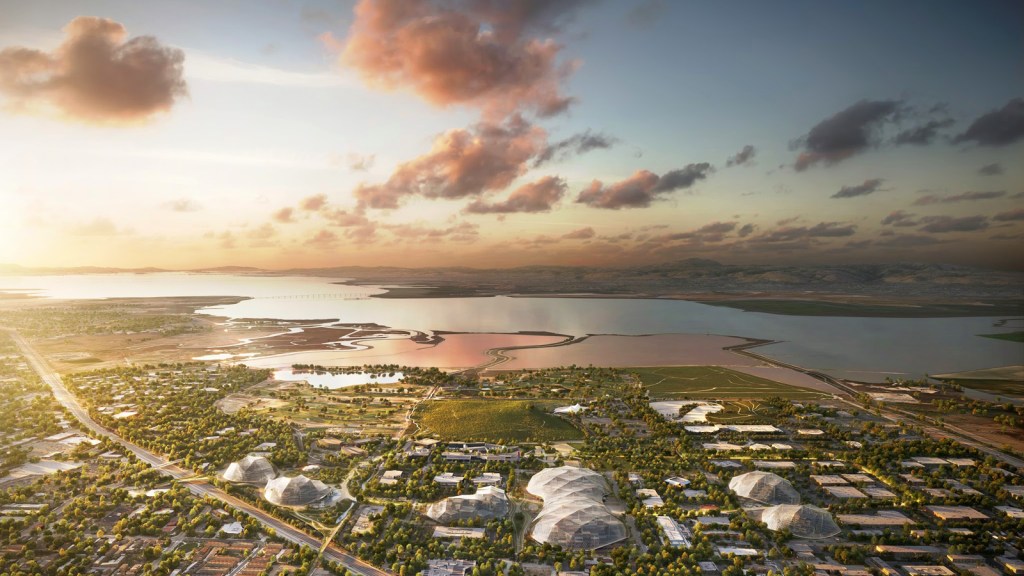 Mountain View to Google: Take your techno-utopian factory town and shove it

Google made a ton of promises to the city of Mountain View, Calif.: New bike paths. New pedestrian bridges over the highway. Two new parks. Wetlands restoration. An educational science center. Major expansion of the free shuttle system that Google started running in Mountain View a year ago. $1.5 million in scholarships for local high schoolers. And a new police station.

What Google wanted in return was development rights to implement its master plan for a new Googleplex — which, if architectural renderings are to be believed, looks like what you’d get if a bay shore area had a baby with a giant glass tent. But when, Tuesday night, it came time for Mountain View to give Google the go-ahead, the city council instead gave the company a big middle finger.

As the Silicon Valley Business Journal put it:

The city council handed LinkedIn about 1.4 million square feet, the lion’s share of roughly 2.2 million square feet of available commercial square footage for the area. Google came away with 515,000 square feet — enough for just one piece of its futuristic four-part campus expansion.

Seriously. LinkedIn! OK, it’s a very successful public company, but for many of us it feels like the Friendster of professional networking sites. LinkedIn did not promise Mountain View the smorgasbord of civic bling that Google did, but it had one key thing in its favor — not being Google. As Silicon Valley Business Journal‘s Nathan Donato-Weinstein wrote:

Elected officials all praised Google’s stunning futuristic design, but also worried about choking off LinkedIn, which they consider a key ingredient for the city’s business diversity. (This is how a friend of mine put it to me today: “In Cupertino, the good news is you have Apple. The bad news is, you have Apple.”)

In March, I wrote about how a few tech companies — but particularly Google — have been trying to rewrite the decades-old template of the office park. As Silicon Valley has continued to add office buildings, but refrained from building housing, the amount of car traffic through the area has skyrocketed — along with the number of commuters on Caltrain, the regional passenger rail system.

Google has tackled this problem first through its bus network and now through housing — ideally, 5,000 units of it on the grounds of the new Googleplex. This solution may be a hit with fans of infill development, but it has not been a hit with Mountain View. As a Mountain View city council member put it three years ago, “Housing by companies went out with the mining towns.”  Mountain View was more than happy to host the mine, but was unwilling to become the town.

According to Donato-Weinstein’s analysis, Google’s push for more housing was not the only factor that scuppered the approval of its plans, but it was a major one. Which raises a few questions. If the future of the suburbs is to make them more like cities, how to persuade the suburbs of this? And are tech companies really the best vehicles for this new urbanism?

Places like the 7.2 in Detroit, downtown Las Vegas, and Seattle’s South Lake Union neighborhood are serving as petri dishes for the tech industry’s idea of how the city of the future should look. Right or wrong, Mountain View’s refusal to petri it up is a warning shot across the bow to anyone who puts too much faith in techno-utopian city planning.