Polluting industries took over this California city. Now, residents are taking it back 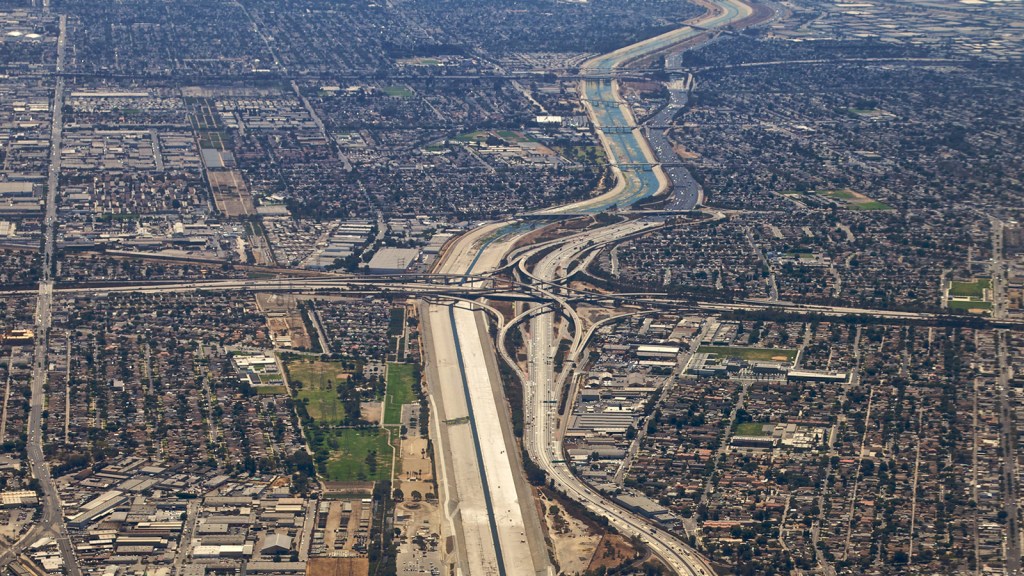 Polluting industries took over this California city. Now, residents are taking it back

The city of Commerce, a small municipality of 13,000 just a short distance from downtown Los Angeles, has long been the recipient of some of the region’s worst pollution. Commerce is the unlucky inheritor of decades of poor land planning, which has saddled its residents with health-threatening conditions and few resources to handle them. But those residents began organizing for change years ago.

In September, they won their city council’s approval of a green zones ordinance — a unique set of policy changes that aim to clean up their community. The ordinance is extensive, and includes objectives to reduce pollution, revitalize the local economy, and reinvest in the community’s well-being. The ordinance sets out strategies, initiatives, and timetables for achievement.

Los Angeles, its neighborhoods, and nearby independent cities like Commerce can be understood in a lot of ways. But the key to making sense of the city — and perhaps the rest of the nation — is the 710 freeway. Originally, this road brought local goods down to the ports of Los Angeles and Long Beach for export. Today, truck drivers on the 710 haul an endless stream of shipping containers packed with imported goods from those massive ports to distribution centers about 20 miles north. Even if you don’t live off the 710, or anywhere near Los Angeles, that highway is still a part of your life — albeit an invisible one. Those jeans you’re wearing right now that were made in China? Yeah –they were probably hauled in on the 710.

Most of the trucks that ferry containers up and down the 710 freeway use diesel — which means that people with homes along the 710 live with higher rates of disease because of substandard air quality. The people for whom the 710 isn’t invisible live in some places you’ve probably heard of, like Long Beach, Compton, and East Los Angeles: an entire region where black and brown people’s lungs are breathing in the cost of getting global goods to the rest of the country.

Commerce, which is 95 percent Latino, is right along the 710’s path, but it’s also home to four big railyards that receive those containers from the trucks on the 710 and send them on their way across the country. One is run by Union Pacific; the other three are operated by BNSF. The diesel trains run, load, unload, or are being serviced there 24 hours a day, seven days a week. FedEx and UPS also operate shipping hubs next to the railyards, where you’ll also find other distribution centers (some are in Commerce proper, others in the neighboring city of Vernon). You’ll also find Bandini Elementary School here, and the small Los Angeles Community Hospital. In fact, the entire north end of the railyard is bordered by homes, separated from diesel-burning trains and trucks by a few yards and simple chain-link fencing.

In short, it’s almost as if Commerce was designed to become a toxic hotspot. People who had moved to the area when it was still a part of Los Angeles during the World War II factory era routinely complained to the city about a lack of resources, as well as about encroaching industries. In 1959, the Industrial Council persuaded residents to support an entirely new city independent of Los Angeles. In exchange for living with all the freight and the factories, residents would enjoy living in homes with zero property tax, free garbage pick-up, and free public transportation. Residents were convinced — and Commerce was incorporated as its own city in 1960. Today, Commerce residents still enjoy the free perks — but nearly 70 percent of the city is devoted to manufacturing facilities, many of which are high polluters.

Some 20 years ago, residents set out to change all that. “We began by knocking door to door,” says Angelo Logan, the policy director of the Moving Forward Network, which operates out of the Urban and Environmental Policy Institute at Occidental College. Logan grew up in Commerce and, in 2002, co-founded East Yard Communities for Environmental Justice (EYCEJ). Logan and the organization are not well known nationally, but they have done tremendous work researching and identifying causes of pollution, along with practical solutions for it, in Commerce and surrounding neighborhoods and cities.

Logan says that, in the early years, EYCEJ spent a lot of time doing ground-truthing and community mapping. Oftentimes, outside activists, scientists, and scholars focus on a neighborhood that they care about but don’t have much connection with. EYCEJ pursued a more grassroots approach. Relying on local residents’ knowledge of their own neighborhoods helped identify the problems there; it also helped build the organization’s membership, encouraged residents that they could have a hand in shaping the city’s future, and created priorities for how to move forward. EYCEJ knew that Commerce was small enough to organize, yet large enough to let you build a critical mass of volunteers. But all that took time.

Mark Lopez, who leads EYCEJ with some 600 members in the region, explains that because Commerce is home to so many streams of pollution, “we’re constantly having to battle threats to our health project by project.” Fighting piecemeal battles with individual polluters was exhausting. It made more sense to try to create a blanket of protections for community residents — including the most vulnerable residents, like preschoolers and the elderly. “A green zones policy,” says Lopez, “is a comprehensive response.”

But Commerce also had to think about its revenue. Aside from a big casino, its tax base is heavily tied to its businesses, including the many that are burning diesel. A long-term plan — especially one that would be backed by the city — would also need to create incentives for existing businesses to reduce emissions. The city established a green zones working group, which included EYCEJ, about five years ago to create a comprehensive policy to address the community’s health concerns as well as the businesses’ anxieties about change. The working group visited with neighbors to gain support, and urged them to sign petitions and display yard signs backing both healthy communities and job opportunities.

As a result, the city council approved the green zones ordinance this September. The city-wide ordinance is the first of its kind in the nation, albeit one with very little fanfare. It’s a package of policies that seek to reduce existing contamination, reinvest in infrastructure that will attract clean jobs, and revitalize the community through investments to attract businesses while improving the neighborhood’s livability.

That sounds like a tall order, and it is. But because Commerce is small, people like EYCEJ’s Lopez are hopeful that oversight can actually work. The working group also spent a good amount of time thinking about the best infrastructure to support the transition into a cleaner, healthier community.

The green zones program boasts rebates, loans, and other financial resources to get business to reduce carbon emissions. Take a business with a gas boiler that wants to go electric. The owner could head straight to the green zones’ ombudsman position, who will act as a type of guidance counselor, laying out the options, outlining the benefits and drawbacks. Now that the city council has approved the green zones ordinance, the green zones’ ombudsman’s job description is being drafted. “There needs to be a hire, and that comes with its own timetable,” explains Lopez. “And there needs to be a work plan, which also comes with its own timetable.”

But time is on the side of Commerce’s residents — with the backing of a city council that chooses to focus on the community’s health. It took years, but the council got behind the green zone plan. Commerce’s Mayor Pro-Tem, Tina Baca Del Rio, says it was a no-brainer. “There was a lot of work that needed to be done, but we made sure that everyone had input,” says Baca Del Rio.

Part of that “everyone” is local businesses, and that’s partially why the process took so long. “I can’t even remember how many years this all took,” says Baca Del Rio, who adds that the green zone process at least got businesses to start thinking about their carbon footprint, even if they’re not yet taking action to reduce it. The mayor pro-tem also gets to point to Commerce’s green zone as a model — and encourage leaders in other cities to do something similar

One part of the green zones policy that the council didn’t approve had to do with prevention and zoning. EYCEJ’s Lopez says that businesses misunderstood the measure. Rezoning always makes businesses anxious, particularly heavy polluters who, because of poor land use management, are next door to homes. Businesses fear new zoning rules might reduce the value of their land, but Lopez says no evidence backs that concern — in fact, he argues rezoning could increase real estate values. Lopez and EYCEJ are doing more research on the zoning policy, and hope to see it adopted in the future.

Too often, poor communities of color share their urban homes with high-polluting businesses that offer few benefits for residents. The people of Commerce are taking baby steps toward changing all that — and offering a new model for other cities to work with. Angelo Logan, who first started knocking on his neighbors’ doors decades ago, says this kind of change takes perseverance and imagination. “We have to fight things — all kinds of things — but we also have to have a vision for something better,” he says. That vision is finally starting to take shape — in one of greater Los Angeles’s most unlikely places.