Last month, I visited the Inspired Teaching School, a public charter school in Washington, D.C., known for its innovative curriculum and visits from the Obama family. I was there to hear from D.C. Mayor Vincent Gray and U.S. Environmental Protection Agency Chief Administrator Gina McCarthy, who were dropping by to observe a second grade class project on how climate change was impacting monarch butterfly populations.

As intriguing as monarchs are, and as important as it is to study them, that wasn’t really my motivation for attending. I was more interested in understanding the impacts of carbon pollution on student populations. McCarthy has had a lot to say about how climate change worsens respiratory problems, particularly in children of color. But I’m also interested in how carbon pollution affects students’ learning abilities.

Here’s McCarthy’s response, when I asked her about that at the Inspired Teaching school visit:

While EPA is focusing on the big challenge of climate change, we can’t ignore all the progress we’ve made and the fact that we still have more to do, even on these traditional issues. So, we’re looking at how particulate matter emissions are impacting our kids. We know that they disproportionately impact them from a breathing perspective, the kids and elderly, but we’re also looking at whether there are neurological problems as well. So the research continues, but the more we learn the more we know how sensitive kids are to these environmental challenges and these exposures. It means they are at much higher risk and we have to factor that risk into everything we do.

Glad to hear the research continues, but there are plenty of studies already in existence linking carbon pollution to kids cognitive and emotional development.

One of the latest studies on this comes from researchers in the United Kingdom, where the economists Victor Lavy, Avraham Ebenstein, and Sefi Roth looked at the effects of air pollution exposure on Israeli high school students’ performance on “high-stakes” standardized tests from 2000 to 2002. They found that both particulate matter (PM 2.5) and carbon monoxide, “exhibit a robust negative relationship with test scores,” and that PM2.5 “has a larger negative impact on groups with higher rates of asthma.”

Such exposure not only spells counterproductive for kids’ learning, but also for their ability to work when they get older, the authors wrote:

The results suggest that the gain from improving air quality may be underestimated by a narrow focus on health impacts. Insofar as air pollution may lead to reduced cognitive performance, the consequences of pollution may be relevant for a variety of everyday activities that require mental acuity. Moreover, by temporarily lowering the productivity of human capital, high pollution levels lead to allocative inefficiency as students with lower human capital are assigned a higher rank than their more qualified peers. This may lead to inefficient allocation of workers across occupations, and possibly a less productive workforce.

I don’t know what the outcomes look like in the United Kingdom, but in the United States, the outcome often is jail, especially for people of color. My wonderful reporter-friend Julianne Hing, at Colorlines, wrote about how children of color labeled with disabilities often get raked into a cycle of excessive school suspensions and expulsions. Suspend them too much and what develops is an unsupervised environment — because not all parents can get off work to watch their suspended kids — where wandering kids end up in trouble, and worse, in jail. It’s what’s called the school-to-prison pipeline, and dismantling it has been one of the U.S. Department of Justice’s top priorities due to the racial disparities. 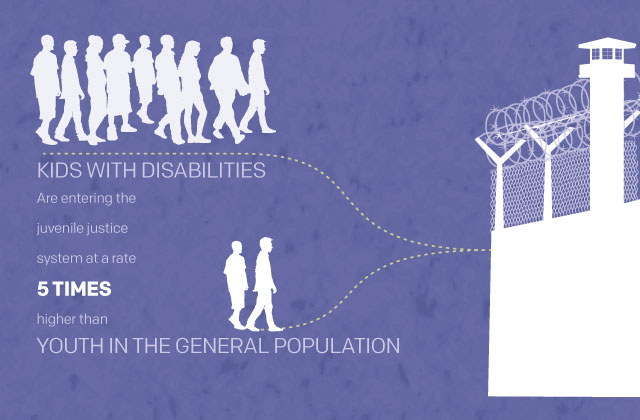 Another recent study conducted by researchers at Columbia University’s Center for Children’s Environmental Health found a link between air pollution and ADHD. Children found with high levels of polycyclic aromatic hydrocarbons or PAHs in their blood were more likely to have it. The good news?

Attention deficit disorders can account some for why some kids act out or lash out in class.

I know this personally. I was a kid who got in trouble A LOT as a student. I was diagnosed late in life with ADHD, a problem that makes it difficult and emotionally frustrating, at times, for me to focus on tasks effectively. It made me somewhat of a burden on many of my teachers growing up, and I’m sure the same goes for many of my editors since I became a journalist.

I’m not trying to rationalize any poor behavior or poor academic behaviors purely on bad air (though I might try this as an excuse next time I blow a deadline), but as McCarthy said, it has to be factored into everything. If climate change heat will only thicken air pollution as scientists say, than teachers might be looking at even tougher challenges disciplining children who might be struggling with an inability to express whatever changes are happening within their lungs, their brains, and their emotions.

My young friend George Carter, who was murdered last month, testified as a student to the stress of high-stakes standardized tests, and suggested planting gardens to help kids cope. He may have been onto something. Otherwise, what we might be looking at is a pollution-to-school-to-prison pipeline that lands people in jails where they might suffer further punishment from climate change.

These are the costs that climate polluters ignore when they focus solely on their bottom line, but society still pays.