This week, New York officially became the largest city in the U.S. to ban that squeaky ecological scourge: plastic foam, usually (incorrectly) known as Styrofoam. The everlasting stuff is finally getting less ubiquitous now that it’s been kicked out of at least 70 cities across the country. (OK, yeah, they’re mostly located in California). 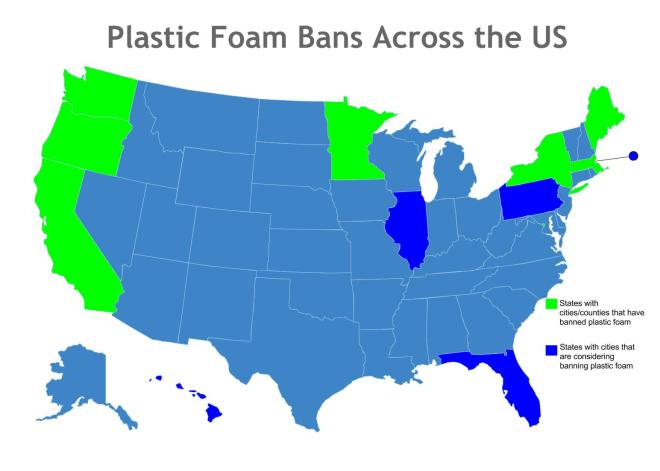 Former New York Mayor Michael Bloomberg originally proposed the ban during a February 2013 State of the City address, but Mayor Bill de Blasio is seeing it through: If all goes as planned, it should roll out on July 1, preventing foam cups and containers and even packing peanuts from being sold in the Big Apple. (You’re still allowed to mail a package to New York full of foam peanuts, though.) Officials say it could eventually remove 30,000 tons of the stuff from streets and landfills and waterways.

Of course, the lobbying group Restaurant Action Alliance issued a statement in protest, saying that it’ll impose too significant of a financial hardship on small businesses and that New York should work on recycling the stuff instead. But guess what? It tried, and it can’t.

Plus, since New York is so huge, Sanitation Commissioner Kathryn Garcia has a good point: “Removing polystyrene from our waste stream is not only good for a greener, more sustainable New York,” she said, “but also for the communities who are home to landfills receiving the City’s trash.”

Right. Including that one really, really big community next door … you know, the ocean.