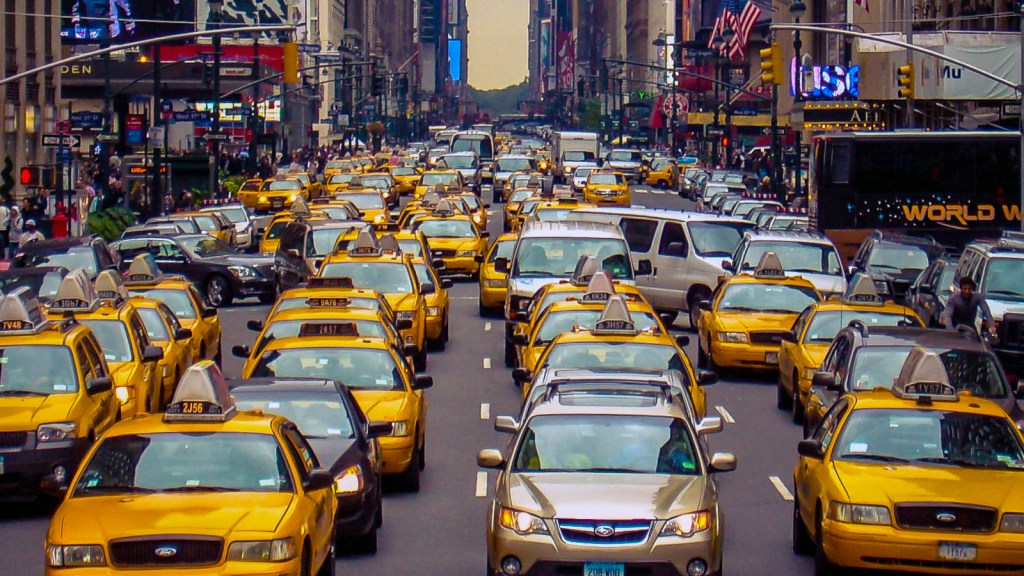 If you’ve tried to drive in Manhattan during rush hour, you know better than to try again. Every year, according to the business advocacy group Partnership for New York City, the cost of congestion as measured in diminished public health and wasted time reaches into the billions of dollars.

Sam Schwartz, who has been everything from a cab driver to the city’s traffic commissioner during nearly a half century working on transportation policy, thinks he knows how to fix this. And now one of his plans has a shot at becoming reality.

It’s called MOVE NY, and unlike a congestion pricing plan that failed to get state support under former Mayor Mike Bloomberg, Schwartz’s latest plan takes the concerns of surrounding boroughs into account in a way that might give it a better chance. MOVE NY would put tolls on bridges and street crossings into Midtown and Downtown Manhattan, including the iconic Brooklyn Bridge, and funnel the revenue into improving mass transit and neighborhood streets. His proposal is backed by an array of environmental and mass-transit advocates, and bills to implement it were introduced in the state legislature earlier this year.

Experts and advocates say a plan like Schwartz’s is the best solution for traffic-choked cities. It would lighten the load on the city’s streets, allow New Yorkers to breathe cleaner air, and help pay for cleaner transportation options. New York City would serve as a proving ground for other U.S. cities.

“It’s going to help cut air pollution, it will reduce traffic congestion,” says Eric Goldstein, the New York City environment director for the Natural Resources Defense Council. “And it’s going to generate needed funds to rebuild and restore the public transportation system in an era when the money certainly won’t be coming from the federal government.”

The question is: Will residents and their representatives go for it this time around?

Sam Schwartz has been trying to fix New York’s traffic troubles for more than four decades. Affable and bearded, he makes frequent radio appearances under the moniker “Gridlock Sam.” (Schwartz actually coined the term “gridlock” during the city’s transit workers strike in 1980.)

In 1971, when he was working in the Traffic Department, the city was struggling with severe air pollution. Under the recently passed Clean Air Act, New York’s air was deemed harmful to human health; the new federal law required the city to take action.

Schwartz figured that getting cars off the road in the most crowded parts of town would help. So he proposed new tolls on the bridges crossing the East and Harlem Rivers into Manhattan. His bosses promoted the idea and got City Hall on board. But the measure had two big opponents in Washington, D.C.

Sen. Daniel Patrick Moynihan and Rep. Liz Holtzman, both Democrats from New York, complained that the tolls would be an unfair burden to drivers commuting from suburban Long Island and the mostly blue-collar outer boroughs of Brooklyn, Queens, and the Bronx, who would have to pay every time they entered Manhattan. Moynihan and Holtzman successfully introduced a bill in Congress blocking the proposal.

“It wasn’t the conservatives, it was the progressives,” Schwartz recalls. “Tolls are always easy for elected officials to knock.”

New York is the country’s densest city, with the most extensive mass transit network and highest share of non-drivers in the United States. But Manhattan’s streets are overcrowded, in part, because it’s free to drive on them. Most of the bridges connecting other boroughs to Manhattan are toll-free.

The straightforward way to unsnarl traffic would be to begin a congestion-pricing program, charging drivers for using the busiest streets at the busiest times of day. Cities that have adopted congestion pricing, such as Stockholm and London, now see fewer cars on the roads, more transit and bike use, and a bigger budget for public transit.

Past efforts to institute congestion pricing in New York have fallen victim to politicians who represent communities that don’t want to pay to drive into Manhattan. No one likes paying for something they’re used to getting free, even if — like road space during rush hour — it’s a shared, precious resource.

Mayor Bloomberg learned this the hard way when the state government killed his congestion-pricing plan in 2008. Though opposition was strongest among suburbanites and Republicans, Bloomberg’s failure to win the support of the Democratic caucus proved decisive.

Schwartz designed his new MOVE NY plan with those decades of lessons in mind. One of the plan’s selling points to suburbanites and outer-borough residents is that it would actually reduce tolls on some of the city’s bridges. Tolls would vary by time of day and run higher during peak hours.

If you live on Staten Island, for instance, it currently costs you $16 to cross the Verrazano Bridge into Brooklyn ($11.08 with an EZ Pass). Under Schwartz’s plan, the most it would cost to with an EZ Pass $5.54, roughly half the current toll.

That’s a major reason that State Sen. Andrew Lanza, a Staten Island Republican, sponsored a bill to put Schwartz’s plan into action. Equalizing the tolls on New York’s bridges would remove a perverse incentive that encourages drivers headed to New Jersey to go through Manhattan just to avoid the expensive Verrazano.

Tom Wright, president of the Regional Plan Association, an organization that promotes sustainable economic development in the New York area, praised the proposal for lowering tolls in parts of the city like Staten Island, where people have fewer mass-transit options.

“It changes the political conversation, and it’s fairer,” Wright said.

The money raised from new tolls on all the East River bridges would help expand subways, buses, and ferries for all New Yorkers. More than three-quarters of New Yorkers who work in Manhattan commute by public transit. Supporters estimate that MOVE NY would generate enough revenue that the city could sell 30-year bonds for $12 billion worth of infrastructure investment.

In an interview with Grist, Rep. Robert Rodriguez, who introduced the bill in the state assembly, said the additional funding would ensure that the long-awaited Second Avenue subway line reaches his East Harlem district; it would also ward off fare increases for subway and bus rides. Even though the money isn’t expected to pay for expanded bike lanes and better sidewalks, pedestrian and bike advocates are enthusiastic supporters. Anything that gets cars off the road, they say, benefits all non-drivers.

To be sure, MOVE NY has its flaws. Many of the vehicles on Manhattan’s streets are taxis and delivery trucks, and trucks won’t stop delivering goods because of new tolls.

Even car commuters may not respond to the changes as much as Londoners did. “Driving into Manhattan is already pretty expensive and a deeply unpleasant experience,” says David King, an urban planning professor at Arizona State and expert on New York City’s transportation network. “I don’t know that there’s going to be much of a shift to transit because of an additional charge.”

Influential opinion makers, such as The New York Times editorial page, have recently endorsed MOVE NY, but the political challenges remain daunting and complicated. Will state legislators from areas getting hit with new tolls get onboard? Or those from car-dependent upstate and suburban districts? What about New York’s crotchety and enigmatic Gov. Andrew Cuomo?

Rep. Rodriguez thinks he can sell the plan to his colleagues by showing each of them how it will benefit their district. He points to a state representative whose district in downtown and brownstone Brooklyn includes entry points to both the Brooklyn Bridge and Manhattan Bridge as somebody who could wind up supporting MOVE NY.

“Her district has more affluent folks who drive, but also bad traffic and congestion because people trying to take advantage of the free East River crossing are clogging up the streets and the BQE there,” he says, referring to the Brooklyn-Queens Expressway.

Once Rodriguez rounds up a majority of his colleagues in the statehouse, he thinks Cuomo will come along. Rodriguez says he hopes to bring the bill to a vote in the new year.

Wright, from the Regional Plan Association, thinks New Yorkers will likely get behind congestion pricing, citing widespread support for local ballot initiatives in cities all over the country that raised taxes for public transit in elections earlier this month. “Two-thirds of these kinds of proposals around the country passed,” he says. “People understand that it’s worth paying for mass transit.”