The real heroes of the Flint water crisis 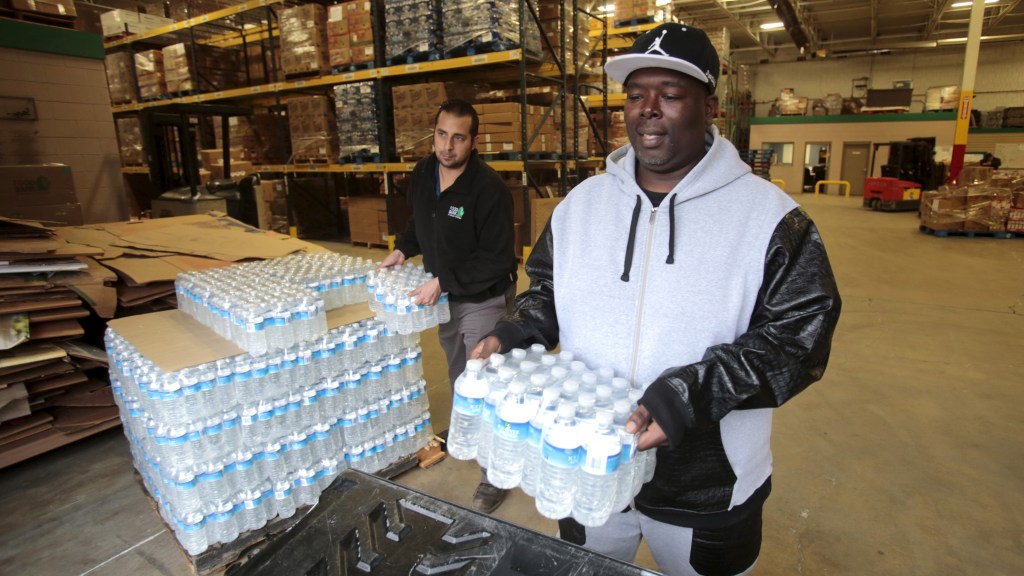 A volunteer picks up bottled water at the Food Bank of Eastern Michigan to deliver to a school. REUTERS/Rebecca Cook
Cities

The real heroes of the Flint water crisis

On Sunday night, while smart people were probably doing anything other than watching the Democratic debate — good for you — I sat through two hours of the candidates praising themselves for not being Republican. It wasn’t until the very end that one of the current greatest environmental disasters in the U.S. was mentioned: the Flint water crisis.

In case you’re Marco Rubio and haven’t heard about the crisis that has finally made its way onto every major news outlet: Flint’s water is poisoned. And it’s been poisoned for months — possibly for over a year. The city’s water supply has high levels of lead, caused by corrosive water from the Flint River deteriorating pipes. Children are showing high levels of lead exposure — which can permanently affect the brain and nervous system in kids. For people of any age, lead exposure can cause permanent health damage. The EPA knew months before warning anyone. And residents of Flint, Mich., are still being harassed to pay their water bills.

At the end of the Democratic debate, Hillary Clinton mentioned Flint. Nice — except that part of what she said was completely preposterous: “So I sent my top campaign aide down there to talk to the mayor of Flint, to see what I could do to help, and I issued a statement about what we needed to do, and then I went on a TV show, and I said it was outrageous that the governor hadn’t acted, and within two hours, he had,” Clinton said.

The statement came with a round of applause from the audience. It’s great that Hillary (and Bernie) mentioned the disaster in Flint at the debate. At the very least, the issue deserves to be on every major news channel until the problem is fixed. But for those who know little about what’s happening in Flint, it might seem like Hillary came in on a shiny white horse to save the day. That is far from the case.

Long before it was a national news story, residents in Flint were organizing and raising hell about their contaminated water. The Flint water crisis has been occurring since April 2014, when Flint cut their water supply from Detroit in an attempt to save money. Nayyirah Shariff, an organizer with the Flint Democracy Defense League, explained on Democracy Now how the water crisis was a human-made disaster thanks to capitalism and austerity:

[Michigan Gov. Rick] Snyder has been trampling our democracy for years, really ever since he’s been in office, and specifically since Flint has had an emergency manager in December 2011. And our City Council wanted to go back to Detroit, and our emergency manager, Jerry Ambrose, said it was inconceivable because it was going to cost too much money. And the culture of the emergency manager is money trumps everything. It’s more important than people’s lives.

When residents first started complaining about their water being tainted, they urged officials to test for contamination and change the water supply but were dismissed and belittled by plenty of political figures. When they tested their own water, some found levels of lead, copper, and E. coli. Their persistence is the reason action is now being taken in Flint — and they’re the ones who should be receiving praise.

When we saw — when we got that notice, we had just had enough, so we started protesting. We wanted answers. We called for meetings. We called for actual research being done. And they wouldn’t give us or couldn’t give us any answers. So people were getting sick across the city. And we all had similar symptoms, with hair loss and the rashes and the muscle pain, the cramps. And this is before we even knew anything about the lead. And it was already just a downward spiral from there.

Flint residents protested, filed grievances, and organized hearings. Despite a lack of resources, the Flint Democracy Defense League started an emergency relief site — staffed with volunteers — for people who did not have access to water. Water activists in Detroit such as Debra Taylor and Monica Lewis-Patrick of We the People have been giving much-needed support and solidarity to Flint residents, even while dealing with their own water crisis.

The revelation that the water was contaminated with lead didn’t come from city or state officials. It didn’t come from a public official warning residents not to drink the water. It didn’t come from a government agency testing the water — in fact, the government tests were inaccurate. It came from investigative journalists during the summer of 2015: Curt Guyette, who’s with ACLU Michigan, and Kate Levy, a freelance filmmaker, along with Virginia Tech researcher Marc Edwards who took it upon themselves to collect water in Flint to be tested. The tests discovered that the water was poisoned with high levels of lead — leading to the city finally declaring a state of emergency in October 2015 and the story reaching national news outlets. Finally, the federal government is involved.

Residents and activists in Flint are now calling for Snyder’s resignation and arrest. After all that happened and is still happening, that seems only too reasonable.