Marven Norman, 26, started biking to and from his job as a substitute teacher outside of L.A. because it was cheaper than driving. He quickly discovered, however, the ride was both uncomfortable and dangerous.

San Bernardino County, where Norman lives, has some of the highest poverty levels in the country. The transportation infrastructure is in a poor state, too: Roads are overbuilt and chronically congested, making for some of the most unhealthy air in the nation, and bike lanes are few and far between.

So a few years ago, Norman started researching ways to improve bike safety in underserved neighborhoods in the area. Now, he serves as the president of a regional bike alliance that pushes not just for safer biking, but equity as well. “Changing the infrastructure falls into three categories,” he told me in an email: “safety, health, and saving money.”

Norman and nine other bike equity advocates are part of a new report on bicycle equity, released by PeopleForBikes and the Alliance for Biking & Walking. The reports —  a bicycling participation report and an “idea book” for building equity in urban areas — use statistics and personal stories to show that poor communities and communities of color use bikes the most, but have some of the worst infrastructure around.

Just how unjust are our streets? We’ll let the facts speak:

Nationally, the report states, the lowest-income households bike the most. In fact, the lower your income, the less likely you are to drive — and not necessarily by choice. As of 2012, according to a study out of the University of Michigan’s Transportation Research Institute, 9 percent of the U.S. population has no access to a car.

More biking may not be a bad thing: Cycling is good for your health, local air quality, and businesses, and a host of other things. But consider the makeup of children biking in dense traffic areas in California, Norman’s home state: 56 percent are Hispanic, 11 percent are African American, and 12 percent are Asian — while only 21 percent are White. (Whites make up 39 percent of California’s population, over all.) 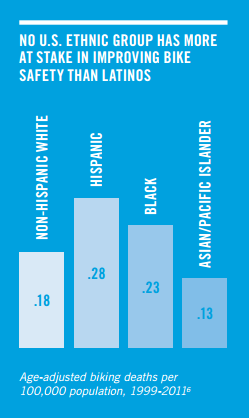 When it comes to bike safety, Hispanics are more likely than any other U.S. ethnic groups to die in a bike accident, followed by blacks.

Clearly, we need better infrastructure, especially in poor communities and communities of color. In particular, the reports recommend installing more protected bike lanes — that is, lanes that are separated from cars with a traffic barrier — which are safer for both drivers and bikers.

We’ve said it before and we’ll say it again — building better bikeways empowers people by giving them more autonomy and increasing mobility for no-car households. And making biking safer for the millions of people of color who are already biking could save hundreds of lives each year.

The “idea book” presents ways cities around the world are making biking safer: In New York, roads are being redesigned with narrower traffic lanes and left-turn bays; in Pittsburgh, white posts separate bikes and auto traffic along a main road; in Seattle’s most diverse neighborhood, advocates are setting up protected lane demos and encouraging citizens to call for action.

The report isn’t a collection of success stories, though: It’s inspiration for further action. The trick, says Norman, is to find the political will to set these projects in motion. “The only road to equitable engineering,” he wrote, “is for more biking advocates and government workers to spend time in Black and Brown communities.”