The Saturday after Christmas was balmy in Baltimore, drawing the bicyclists out into the north part of the city, where grand old trees stretch over broad, Olmsted-designed boulevards. Among them was Tom Palermo, a 41-year-old software engineer and former bicycle mechanic who built custom bike frames when he wasn’t chasing his two young kids around.

The ride was Palermo’s last. Cyclists and neighborhood residents found him, hit by a car and dying, on the pavement on Roland Ave., a lightly traveled street lined with well-marked bike lanes. The driver, who initially fled the scene, was Heather Cook, the second highest ranking official with the Episcopal Church of Maryland. Cook has a previous DUI conviction. The cycling community is calling for her head.

I know Roland Ave. well. I rode it regularly during the four years I lived in Baltimore in the late aughts. My daughter Lucia rode behind me in a trailer, and later on a “tag-along” bike, on the way to kindergarten and first grade. I have friends who still ride that road with their kids.

Palermo’s death was just the latest reminder of the risks cyclists take while pedaling through U.S. cities, often just to get to school or work. Among the other wake-up calls I’ve received this year: Getting hit by a car while riding home in a well-marked Seattle bike lane; and, while riding to work a month later, coming upon the body of 31-year-old attorney and mother Sher Kung, who was killed by a truck while riding in a bike lane downtown.

And still I ride, four or five days a week, unless the weather is truly dreadful — and even then, I often wish I were huffing along on my old commuter bike rather than slouching in a seat on a King County Metro bus. I’ve been commuting by bike, on and off, for more than 20 years.

If the stakes are so high, why do we do it? And isn’t there a way to change the rules so that we can get to work in the morning under our own power without flirting with death?

First, the why. Me, I blame my dad. He was riding his Raleigh ten-speed to his job as a computer engineer in Salt Lake City when I was in diapers. We’ve got a photo in a family album of him weeding the garden in a cast, having slipped on a patch of wet pavement and shattered his tibia. He missed my brother’s third birthday party because he was in the hospital having screws put into his ankle. 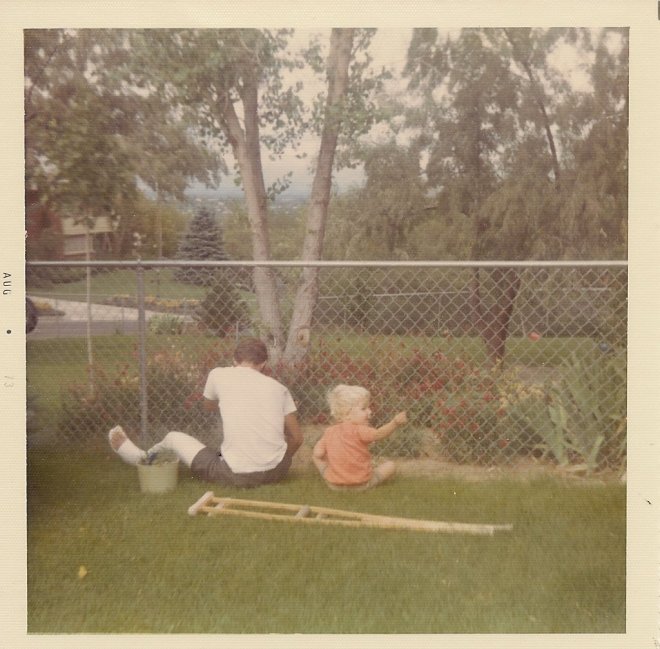 Like my dad, I ride because I spend all day at a desk, which is not only about the worst possible thing you could do to a human body, but is also enough to make a high-energy Hanscom completely batty. I could yammer on about the environmental benefits of biking vs. driving, or why I think bikes are one of the keys to creating sustainable, livable cities, but really, it’s that simple: I would be a miserable monkey if I had to drive or ride the bus to work every day. I honestly don’t know how people do it.

As for the question of how to make cycling safe, my thinking has changed a lot in the last year. Until I was hit, I operated on the assumption that bikes and cars could coexist peaceably on city streets. There are idiots and assholes wherever you go, but for the most part, drivers had been respectful and accommodating during the years I’d commuted by bike. I’d had some scrapes, mostly of my own making (ask me about the time I got my cleat stuck in my pedal and toppled over in the middle of rush hour traffic), but had managed to navigate the world of concrete and steel without major injuries.

But my crash made me realize that, by some combination of skill and luck — mostly the latter, I’m sure — I’d managed to thread the needle. I truly believe that the woman who hit me did not even see me riding up the lane in front of her in the afternoon sunlight. I was the gorilla on the basketball court — that thing she saw right through because she wasn’t expecting it to be there. I don’t blame her. If anything, I feel bad for her. The accident was clearly as traumatic for her as it was me.

The real problem is that our streets weren’t designed to accommodate bikes and cars together. Cities like Seattle and Baltimore have made strides in recent years, laying down miles of bike lanes and peppering the streets with sharrows, but neither has a coherent bike network, despite having plans on the books. Getting from Point A to Point B on a bike inevitably involves navigating streets alongside cars.

“Protected” bike lanes like the one Seattle installed shortly after Kung’s death are a start (although don’t even get me started on that one in particular), but cycling in the city will continue to be a gamble until there are truly functional networks of these lanes woven through the city — until bicycles are put on level ground with cars. (If you want to see a city that’s done that, go to Copenhagen.)

When I hear about wrecks like the ones that killed Sher Kung and Tom Palermo, I find it hard to relate to the knee-jerk fury that I see from many in the cycling community.* I drive a car, too, after all. I know how easy it is to get stuck in the bubble of steel and glass and think, “What in the world is this dope thinking riding a bike on this street?” I see cyclists do stupid things every day — things that could easily get them killed. We’re all fallible, no matter what our mode of transport.

No, mainly I feel sad — sad that we’ve lost another kindred spirit, another person trying to find his or her way in a world we’ve designed for our gadgets, forgetting about our humanity. Kung and Palermo were both close to my age. Both had young kids like I do. I know my wife, Tara, worries when I’m late getting home from work. Most of the time, I feel like I’m relatively safe while riding on the streets — vulnerable, yes, but in control of the situation — but I know what can happen, and I hate to think about how my family would feel if it happened to me.

And so I’m left to advocate, as best I can, for safer, more sensible streets. And I’m doing my best to raise the next generation of bikers. Lucia, who is now 10, is still riding to school with me — now on her own bike. Her little sister, Chloe, rides the old tag-along. Some days, Tara or I will ride them to school on our cargo bike. We thread through quiet, neighborhood side-streets and then ride a wide bike lane — down another broad, leafy, Olmsted-designed boulevard. And we talk a lot about safety. (I’ve switched up my route to work since my crash, as well, and pimped my old ride to make me more visible to drivers.)

I know there are risks to biking in the city, but I believe that if we keep working at it, we can make room on our roads for bikes and cars, both. The future of our growing urban centers depends on it. Besides, I know my kids are going to need a way to burn some energy on the way to school or work. They’re Hanscoms, after all. They’ll be some sad monkeys if they don’t get their ya-yas out before they hit the books. 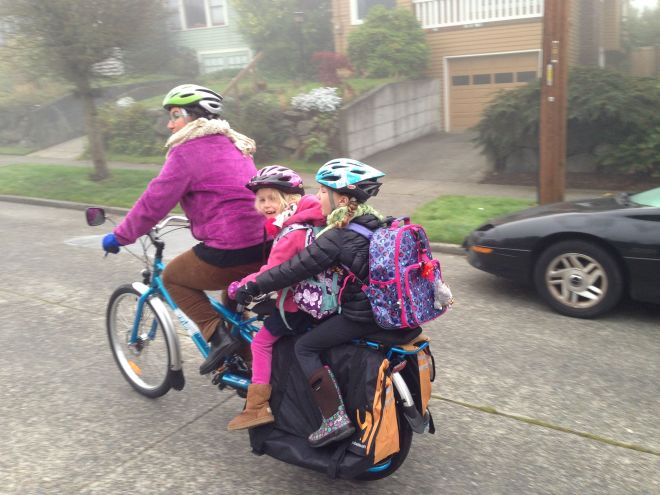 * UPDATE: After I published this story, state’s attorney Marilyn J. Mosby announced that Cook will be charged with manslaughter in Palermo’s death, as well as leaving the scene of a fatal accident, driving under the influence, and causing an accident due to texting while driving, reports the Baltimore Sun. You heard that right: drunk and texting. Now I’m feeling the fury.