Peering closely at the climate talks underway in Paris could be a formula for depression.

Entrenched divisions persist between richer and poorer countries on key negotiating issues. Pledges to tackle climate pollution that were submitted by nations before the talks began a week ago were underwhelming, and they would collectively allow global warming to blow well past the dangerous benchmark of 2 degrees C (3.6 degrees F). 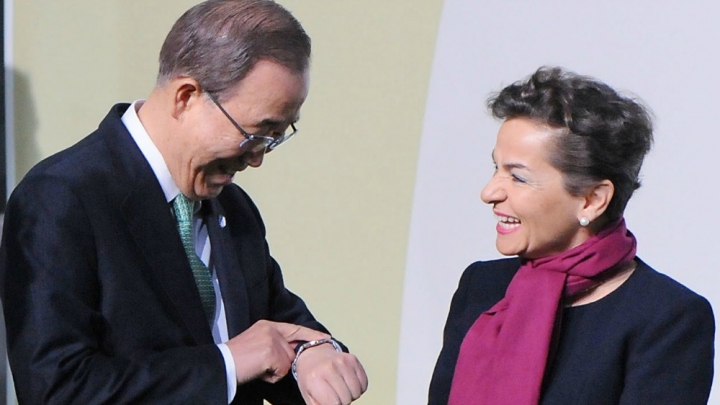 These are serious problems threatening to bake the planet — and the human beings and wildlife that rely upon it.

But, as this year’s historic round of United Nations climate talks enters its crucial closing week with ministers arriving in Paris to take over from their underlings as they try to seal a deal by week’s end, here are five reasons to consider staying upbeat.

1. The world is trying something new

The Paris meetings are the 21st annual conference of the U.N. Framework Convention on Climate Change. Yet none of the meetings that came before them have made a meaningful dent in the problem of global warming.

The most ballyhooed of the annual climate pacts so far was also archetypal of a climate diplomacy formula that’s proven to be a failure. The Kyoto Protocol of 1997 attempted to enforce arbitrary and generic reductions in the amount of pollution allowed from developed countries from 2008 to 2012.

Yet Europe met its commitments largely because of the effects of an economic downturn, the U.S. never ratified the treaty, and Canada withdrew from it after it became clear it would miss its targets. Only a handful of governments have formally backed an extension of the protocol covering the period from 2012 to 2020.

In Paris, the U.S. is pioneering a new approach that relies on nations making voluntary commitments to reduce their climate impacts. The entire process is becoming a high-stakes exercise in cajoling and pressuring.

That new approach frustrates some, particularly in Europe, who would prefer to see pollution improvements mandated by international law. Those are legitimate concerns, particularly since nobody knows if the new approach will work any better than the old one. But most nations and many experts believe it’s time to try something new.

Although the bottom-up approach being negotiated in Paris is a new one for climate diplomacy, it resembles bilateral and multinational approaches that have succeeded in reducing threats of nuclear and biological warfare.

Efforts to reduce the number of warheads that the U.S. and U.S.S.R. were pointing at each other floundered for years at the U.N., but both countries were spurred to act bilaterally following the Cuban Missile Crisis of 1962. The crisis nearly triggered a nuclear war, reframing that threat from largely theoretical to one that was tangible.

“Very quickly after that, they moved to stop the atmospheric testing of nuclear weapons,” said Ruth Greenspan Bell, a public policy scholar at the Woodrow Wilson International Center for Scholars. “The analogies for climate change are so obvious, and I think this is where we’re going now.”

The worsening impacts of climate change may be having a similar effect — making the threat of greenhouse gas pollution finally seem urgent to world leaders. Bell likens the 1960s turning point in nuclear disarmament with a climate agreement that was struck last year between China and the U.S. That agreement formed the basis of both countries’ U.N. climate pledges.

“In climate change, there are only a handful of countries that are really causing the emissions problem,” Bell said. “There were really only two countries that had most of the nuclear weapons, and a lot was achieved over many decades by bilateral discussion and and negotiations, to the point where they were able to reduce the number of warheads on both sides.”

3. Almost everybody is in for climate action

More than 180 countries submitted climate pledges during the past year. The 11 that didn’t tended to be torn apart by war or controlled by despots.

Such pledges include commitments to reduce greenhouse gas emissions by certain amounts after 2020, or to stop further annual increases in greenhouse gas releases by a particular year.

The pledges are a new concept — no such commitments were in front of negotiators during any previous rounds of U.N. climate talks.

A hoped-for agreement in Paris would help guide progress toward meeting those pledges (which are known as INDCs, or intended nationally determined contributions), such as by dictating how frequently they are updated, how they are reviewed, and how richer countries will help poorer ones use clean energy to grow their economies.

Even if the talks in Paris collapse without an agreement being reached, the array of climate pledges that were dutifully filed signify that governments around the world are thinking seriously about global warming — and how they can contribute to a looming war against it.

Although the pledges are underwhelming, analysis by the U.N. and other groups shows they would have a meaningful effect if fully honored.

Fuel burning, deforestation, and other industrial activities have already warmed the planet by 1 degree C, and the world appears to be on a trajectory to quadruple that amount of warming. If the climate pledges are honored, warming might be limited to about 3 degrees C.

A world that’s 3 degrees C warmer than preindustrial times would be inflicted by horrific heat waves and catastrophic flooding. But under a “ratcheting mechanism” that’s being negotiated in Paris, it looks likely that the pledges would be reviewed and resubmitted every five years, which could further reduce future warming. That’s because prices continue to fall for clean energy, and because political support for climate action continues to rise.

“I think you’ll see countries potentially do a lot more over the coming years,” said Jamie Henn, a spokesperson for 350.org.

Still, nearly half of the power generating capacity installed worldwide in 2014 was built to produce clean energy, such as solar or wind power, according to findings published last month by Birol’s agency.

In the coming years, renewables are projected to become the world’s leading source of new energy supply, helping to displace the fossil fuel power plants that have caused so much of the climate change problem to begin with.

A Paris agreement wouldn’t force countries to accelerate clean energy developments in their countries. But simply planning for the Paris meetings helped pressure countries to do so, and any agreement that’s reached this week will help to coordinate and guide these efforts.