During the climate-bill fights of 2009-10 — how long ago they seem! — my main interaction with fans of the policy known as “cap and dividend” was listening to them complain about the Waxman-Markey bill. They were one of many factions in the climate coalition who thought they had the extraordinary luxury of derogating actual, live climate policy proposals in favor of fairy-tale alternatives. After all, everyone knew by then that America was going to do something about climate change, right? Why not dig in one’s heels on wonky policy distinctions, like a petulant child incensed at receiving the wrong brand of toy?

Of course, we now understand that the American Clean Energy and Security Act was the one credible chance at comprehensive climate legislation we are likely to see in the U.S. for the next decade at least — by which time our emissions should have peaked if the world is to have a chance at avoiding disastrous climate changes. It was our shot. There’s a good chance it never could have passed the Senate even with unified support from climate hawks, but we’ll never know, will we? 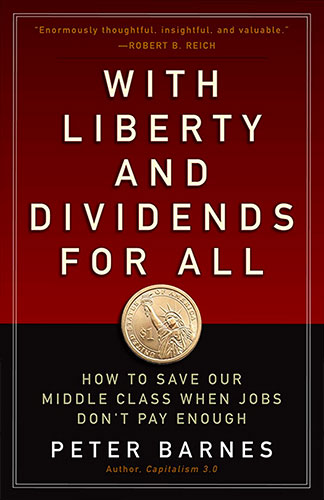 All comprehensive climate policies are equally impossible in our current political milieu, so we might as well have some blue-sky discussions. It was in that spirit that I recently read With Liberty and Dividends for All: How to Save Our Middle Class When Jobs Don’t Pay Enough, the new book by Peter Barnes, co-founder of Working Assets and the earliest and most articulate defender of cap-and-dividend. Barnes stopped by the Grist offices to chat about it last week (and made an elevator pitch for the idea — in an actual elevator).

Yes, I keep saying “cap and dividend” without explaining it, which is annoying. Before getting to that part, though, let’s take a step back and look at Barnes’ larger framework.

He starts with a simple premise: The good-paying jobs that created and supported the U.S. middle class in those halcyon decades after World War II are never coming back. The reasons range from globalization to automation to hyper-capitalism that favors capital over labor, but none of the trends show any signs of reversing. America has disguised this grim situation with cheap consumer goods and cheap consumer credit, but those are no longer enough. Stagnant wages, low-paying jobs, and escalating inequality are the new normal.

As far as I know, there is no credible plan to halt the decline of, much less restore, the American middle class. There’s lots of hand-waving about education reform, small-beans efforts to boost manufacturing, idle dreams of some day restoring the power of unions, and occasional meliorative gestures like raising the minimum wage, but nothing that promises to reverse the larger trends. (See Alan Blinder’s list for a representative example.)

If the service jobs that now dominate U.S. job growth don’t pay enough to get people into the middle class, Barnes reasons, then we need some systematic way of increasing incomes, not just among the low-income (which is what minimum wages hikes do) but across the board. And if capitalism favors capital over labor, then what people really need is some non-labor income.

What might serve as the source of that income? What sort of capital stock do Americans own that produces value? Well, just by virtue of citizenship, they co-own an enormous amount of common resources. Barnes identifies several pools of common wealth, including the atmosphere, the electromagnetic spectrum, the copyright system, and the financial system. Some of the biggest businesses in the world succeed almost entirely by drawing on such common resources. Without them, no one would be able to get rich at all. (Elizabeth Warren memorably made this point in her notorious “factory owner speech” — Obama’s clumsy retelling helped inspire the GOP’s “you didn’t build that” mania in 2012.)

Barnes proposes that Americans receive some of that shared value as annual income. That is the basic idea behind “dividends for all”: to charge a fee to companies that access common resources and distribute the funds equally among America’s shareholders, i.e., anyone with a Social Security number. It is, he says, the only credible prospect for boosting American incomes enough to support a middle class. And distributing dividends would drive consumer spending, which in turn would stimulate demand and drive economic growth.

As an example of how it would work, Barnes cites the Alaska Permanent Fund, which distributes part of the value of the state’s oil leases equally among state citizens each year. (This year Alaskans are getting $1,884 a piece.) A few features of that system are worth noting, beyond the somewhat counterintuitive fact that it was established by a Republican governor.

First, the fund does not increase the size of government. Every year the money is collected and distributed automatically; the state takes on no debt and collects no revenue.

Second, it is not welfare. More to the point, is not seen as welfare by Alaskans. It is explicitly based on common ownership and is not means-tested; every citizen gets an equal cut. This helps it avoid the toxic race and class politics that bedevil welfare.

Third, the money is not refunded via tax returns or otherwise buried out of sight (like, say, Obama’s payroll tax cuts). Instead, it is wired directly into bank accounts, so every citizen is reminded of it every year. Its visibility helps explain its enduring popularity — no Alaska politician will touch it. (Conversely, lack of visibility helps explain why Obama got zero credit for those payroll tax cuts, which most workers never even knew about.)

Barnes proposes something like Alaska’s system on a national level: distributing equal, universal dividends from pools of common wealth.

For each of the pools, there would be a different system for collecting the money: a charge added to auction prices for slices of the electromagnetic spectrum; a small financial-transaction fee; a small fee for copyright protection; and so on.

Obviously it’s the atmosphere that’s of most interest to us Gristies. That’s where “cap and dividend” comes in. To generate climate dividends, Barnes would implement a hard, declining carbon cap. (A tax or fee, he says, is not enough to guarantee the necessary reductions.) Permits would be auctioned (no trading!) only to upstream sources, where carbon enters the economy — think wells, mines, and oil tankers. As the number of permits declined, permits would become more valuable and dividends would increase, driving a virtuous political cycle that brings public support behind carbon reduction.

Barnes calculates that by tapping common pools of wealth, America could generate $5,000 a year in dividends for each citizen, $20,000 a year for a household of four. That won’t make anyone rich, but it’s a hell of a safety net — a complement, not a replacement, for social insurance, Barnes says. And by transferring money down the income scale, it would serve as a form of ongoing economic stimulus.

So you reduce climate pollution, discourage financialization and patent trolling, and stick a thumb in the eye of cable companies, while growing the economy and restoring the middle class. Sounds pretty good! So what should we make of it? I’ll just offer a few thoughts here.

A system that deposited checks in every American’s bank account every year would indeed prove politically durable. No one likes giving up checks! But still, Alaska aside, the chance of something like this passing into law seems so remote as to be fantastical. Barnes acknowledges it has no immediate political prospects. He quotes Milton Friedman, who said that when crisis comes, “the actions that are taken depend on the ideas that are lying around.” He wants this idea lying around.

But still. I honestly have trouble even envisioning the political economy where this could succeed. It would reverse a strong trend toward privatization of public resources, to say the very least. It would be hugely redistributive in a country that has always been suspicious of redistribution. And it would require an enormous leap of faith in the government, when faith in government (and all institutions) is in the midst of a decades-long decline.

On this last point: I recall that during the climate bill fight there was polling done on which climate policies the public prefers. It turns out that most people prefer the stuff economists hate — subsidies for clean energy and regulatory limits on pollution. The policies that promised dividends polled the worst, simply because Americans do not trust grand promises from the government. Dividend fans like James Hansen (a pastor of the tax-and-dividend subsect) simply assert that dividends will be popular with the public. It makes sense to them. But gut feelings are a poor guide to politics and there’s no evidence that a promised free lunch is a political winner. After all, voters would not be introduced to the proposal via Barnes’ careful framing, but through soundbites in political ads, most of which would be designed to convince them that it was communism.

Despite its poor political outlook, I do find the whole scheme intellectually appealing. There’s an elegance to it. And it’s the first proposal I’ve heard for restoring the middle class that doesn’t bank on the fantasy of high-paying jobs returning. It’s also a direct and transparent way to go after economic inequality. And it foregrounds communal American interests, which is nice in a time of polarization. Climate-wise, it has a declining carbon cap with auctioned permits, so it passes both environmental and economic muster.

One reservation I’ve always had about these “revenue neutral” schemes is that we badly need government revenue for large-scale investments in clean energy infrastructure. I asked Barnes about this and he had a pretty good answer. The amount of money involved in these dividends is enormous, probably more than could practically be spent on clean energy anyway. What the government could do, he said, is tax dividends like normal income (i.e., progressively) and use some of that revenue for clean energy.

So, sure, I guess I’m on board. It’s a windmill, but we are all Quixotes now.