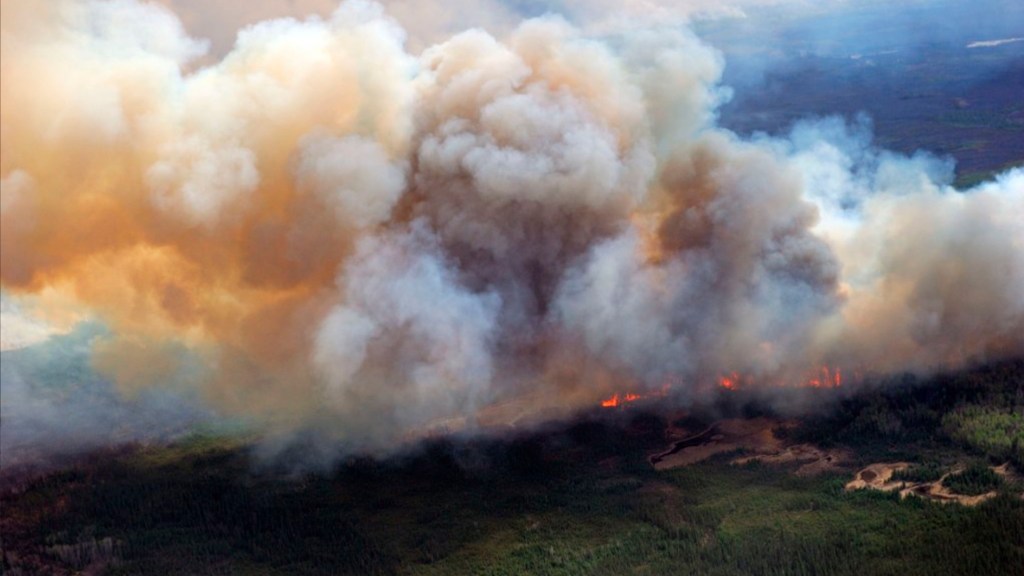 Fort McMurray, in Canada’s Alberta province, is surrounded by two things: oil sands and boreal forests. And while the former emerged from last week’s massive wildfire largely unscathed, the latter is significantly threatened by the continuing flames. That fire grew to nearly 93,000 acres after merging with a second wildfire on Tuesday, and is likely to continue to burn for months. At the moment, it’s headed away from human civilization and into the woods.

That might sound like good news, but it’s actually quite bad for everyone in the long run. In the past week, the volume of emissions released by the Fort McMurray wildfire has mushroomed to the equivalent to 5 percent of Canada’s annual greenhouse gas emissions, reports the Edmonton Journal. And scientists have long warned that boreal forests — which run across the northern hemisphere from Canada to Alaska, Russia, and Greenland — are crucial to contain damage from climate change.

How? For one thing, the world’s forests absorb a significant amount of the carbon dioxide that humans release into the atmosphere. For another, boreal trees contain huge deposits of CO2: about 75 tons of CO2 equivalents per acre, according to Canadian Forest Service research scientists quoted in the Edmonton Journal, which is emitted as the trees burn. The problem isn’t limited to trees, but the “layers of moss, leaves, and other organic materials that insulate permafrost from surface heat,” as Yale’s environment360 project noted last year. And the really big fires melt permafrost — which contains twice as much CO2 as the trees.

The world’s boreal forests, which make up one-third of all forests on the planet, are currently caught in what The New York Times calls a “dangerous feedback loop.” Conditions exacerbated by climate change, such as El Niño, have created dry winters and turned fragile forest ecosystems into tinderboxes, as seen last year in Alaska (where 5 million acres of forest burned) and this year in Alberta, among other examples. Soot from megafires travels by wind and settles on ice caps, darkening them and making them absorb more heat from the sun and melt more rapidly; this, reports the Times, was a contributing factor to Greenland’s ice sheet melting nearly entirely in 2012.

To sum up: Wildfires both directly contribute CO2 to the atmosphere and hinder forests’ ability to absorb CO2 for years to come.