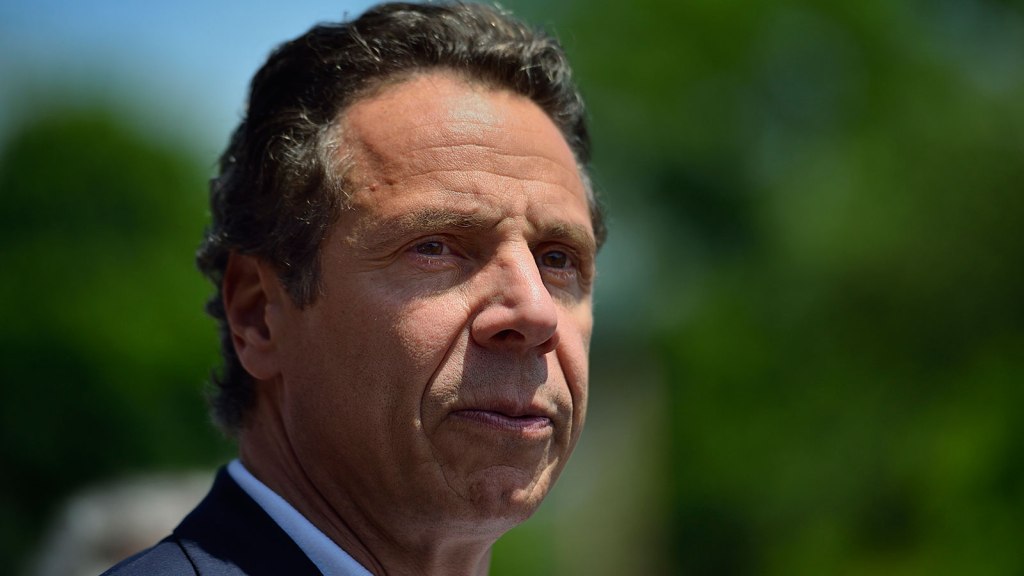 New York Gov. Andrew Cuomo (D) wants to run for president. He may not run in 2016 because he’s being bigfooted by a certain former senator from his own state, but everything he does is with an eye toward a national election. And Cuomo’s understanding of the national electorate is frozen in amber from the era when he came of age. He constantly worries about seeming too liberal, and defines that in rigid, outdated terms.

He’s the son of former Gov. Mario Cuomo, a great liberal orator , but he is running away from his father’s legacy. Andrew refuses to let New York City raise its minimum wage or pass a tiny tax increase on the super-rich. Cuomo won’t even help Democrats retake the state Senate because he fears they would then send him progressive legislation and he would have to actually sign or veto it and risk offending some potential future constituency.

Cuomo has neglected economic inequality, punted on fracking, and undermined ethics reform, thereby inciting a surprisingly strong liberal primary challenge this year from a law professor named Zephyr Teachout. Some pundits, including yours truly, speculated that in response Cuomo would move leftward, perhaps by banning fracking. Instead, Cuomo has adopted the slithering rhetoric of a cowardly Republican who does not accept climate science.

New York City was devastated by Hurricane Sandy in October 2012. The Buffalo, N.Y., area was just buried under a massive snowstorm, which is unusual for this early in the season. Cuomo acknowledges that weather is getting weirder, but he is refusing to acknowledge the reason. “We are experiencing a pattern of extreme weather that we have not seen before,” Cuomo told reporters Sunday after a press conference, according to Capital New York. “I don’t want to get into a political debate at this time about climate change causes, et cetera. Forget the causes. Is it global warming? Is it reliance on fossil fuels? Forget the causes. What is inarguable is the result.”

The cause of climate change is not determined by “political debate.” It is the subject of ongoing scientific research, which has led to an accretion of facts. It is not the case, as Cuomo implies, that whether human activity causes climate change is “arguable.” Of papers in peer-reviewed scientific journals, 97.2 percent of the ones that address the cause of climate change find that greenhouse gas emissions from human activity are responsible. The only thing “political” about the matter is the effort by fossil fuel companies and right-wing ideologues to sow doubt about the scientific consensus among the general public.

Cuomo’s comments on climate echo the “I’m not a scientist” dodge used by various Republicans. They’re particularly reminiscent of comments from Cuomo’s GOP neighbor, New Jersey Gov. Chris Christie, who, when asked about the connection between climate change and Sandy, dismissively replied that he has no time to focus on “esoteric theories.” Christie and his whole administration avoid mentioning climate change or sea level rise in relation to Sandy.

As The New Republic’s Rebecca Leber notes, Cuomo’s actual record on climate and energy is respectable, but his foolish comments still matter:

He’s helping the state prepare for climate change by investing in adapting its energy and transit infrastructure. He has invested heavily in clean energy like solar. He has even advocated for a more aggressive cap on emissions through a regional cap-and-trade agreement.

But Cuomo is still doing harm by ignoring the role humans play in climate change, because it’s impossible to discuss solutions without addressing its causes.

The strangest thing of all is that Cuomo made a forthright case for climate science and climate action only last year, drawing the connection between global warming and dramatic weather shifts. Here he is in his 2013 State of the State address, his first after Sandy:

First thing we have to learn is to accept the fact — and I believe it is a fact — that climate change is real. It is denial to say this is — each of these situations is a once-in-a-lifetime. There have been — there is a 100-year flood every two years now. It’s inarguable that the sea is warmer and that there is a changing weather pattern, and the time to act is now. We must lower the regional greenhouse gas emission cap. And let’s make a real difference on climate change by reducing the CO2 cap. We must also increase our use of local renewable power sources. We propose increasing the use of alternative power, distributed generation of electricity, which will reduce the reliance on the large power plants.

So why is Cuomo now sliding backward into ignorant babbling? Local activists wonder if he is trying to create room to wiggle out of future environmental action. “Maybe he doesn’t want to get caught [having to ban] fracking,” says Kim Teplitzky, a Northeastern spokesperson for the Sierra Club. “But there might be a lot more to it. The state has a renewable portfolio standard that they’re way behind on meeting.”

Or the answer could be simpler: that Cuomo, a cynical, vindictive, hyper-political creature, wants to distance himself from the left. He thinks it’s in his long-term political interest. And he is mad at the progressives, many of them green, who backed Teachout’s campaign.

In an interview with New York magazine’s Chris Smith in late October, Cuomo offered this view of Democratic politics:

Bill Clinton wins saying to the left of the party, ‘You are unelectable.’ Bill Clinton gives a speech saying, ‘Mario Cuomo, Dukakis, Ted Kennedy are the politics of a failed Democratic Party.’ Bill Clinton does Sister Souljah, puts his finger in the chest of Jesse Jackson. That was after a period of left dominance. Clinton is then centrist-moderate-left, right? Sort of tacks back and forth between the two. Where is the national Democratic Party now? Well, they’re talking about Hillary Clinton. Her last name is Clinton, which represented that centrist-left platform. So I think that’s where the party is nationwide. And the Clinton philosophy is still a winning philosophy.

No leftward turn there. Cuomo is moving further rightward, and sensible climate policy might be the victim of his misguided political ambition.