In the ski business, there are no climate deniers - Grist 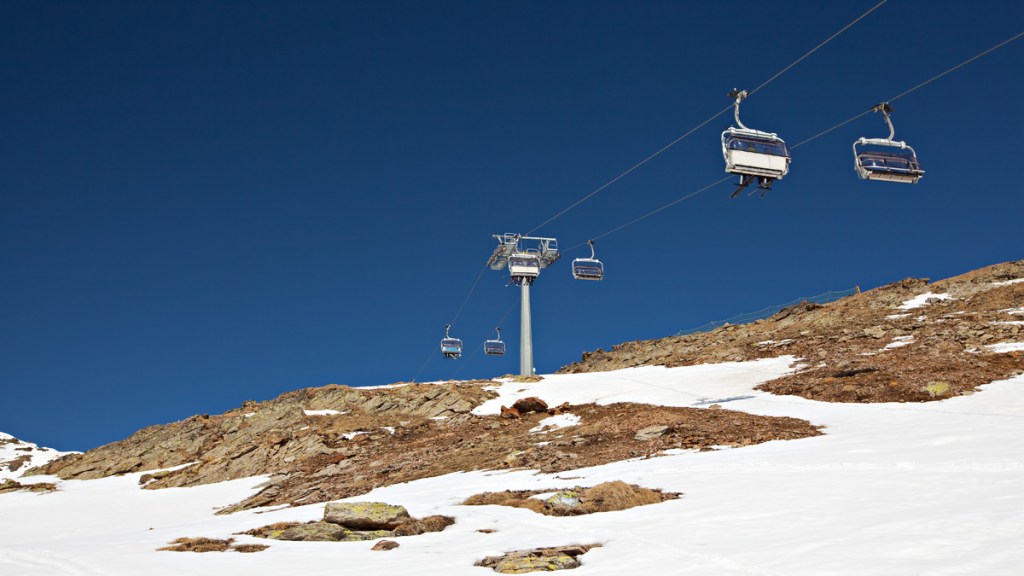 In the ski business, there are no climate deniers

Snow sport season may be officially upon us, but don’t get too excited yet. Some of California’s most beloved ski runs are looking pretty brown, making opening days a little less celebratory and a lot more troubling for skiers and snowboarders hoping to hit the slopes across the Golden State.

According to research from the University of California, Berkeley’s Central Sierra Snow Lab near Lake Tahoe, last year’s snow pack was the second lowest it’s been in a whopping 90 years, topping just 52 inches. While snowfall made up as much as 82 percent of the area’s annual precipitation in the late 1970s, it has dropped to as low as 67 percent in recent years. Snow is becoming a bit of a luxury in the mountains these days.

Prospects for snow are worrisome enough for California ski areas that banking on a sizable snowpack is turning into “a high-stakes gamble,” writes John Branch for the New York Times:

If the debate about global warming still echoes around the world of politics, it has long since faded at ski areas.

“I don’t know of anybody in the industry who is saying that climate change is not an issue for us,” said Bob Roberts, president and chief executive of the California Ski Industry Association. “If you’re below 6,000 feet, it’s a real challenge.”

Many resorts across California, normally a Mecca for powder hounds, are being left with no option but to invest in snow-making equipment in order to stay afloat during the winter months — as much as $8 million worth within the last three years at larger resorts like Squaw Valley and Alpine Meadows. But making snow is not without its costs: At resorts like Big Bear Lake, snowmaking equipment can suck up to 7,000 gallons of water from the lake per minute, at a whopping $3,000 per hour.

Provided there’s enough water to go around and that temperatures are below freezing — both pretty hard to come by in California right now — manmade snow leaves a pretty hefty carbon footprint, too. At Squaw Valley alone, nearly 20 percent of its overall carbon footprint is a result of making its own snow.

California may be feeling the effects of scarce snowfall the hardest right now, but in the long run, the future of one of our favorite winter pastimes remains unclear across the board, Grist’s own Greg Hanscom reports:

Despite last year’s extreme weather patterns and the West’s ongoing drought, skier and snowboarder visits nationwide were still strong during the 2013-2014 season, according to the National Ski Areas Association. Attendance topped more 56.5 million visits — down just 0.7 percent from the season prior. According to statistics from Colorado Ski Country USA, last year’s 2013-14 season also happened to be the best season on record in the state, with 7.1 million visits, thanks to an early round snowfall that continued well into the spring.

But because of low snowfall and drought across the Pacific Northwest and Pacific Southwest, visits dropped 19.4 percent and 27.8 percent respectively. And while it’s still early to be making predictions, this season isn’t exactly off to a blowout start. As of this writing, it looks like Boreal, Heavenly, Mammoth, Mountain High, and Northstar are open for business — but only with help from manmade snow.

The ski industry is starting to head the call when it comes to global warming, as we reported last February. And the Congressional Ski and Snowboard Caucus, a group of lawmakers who have pledged to advocate for resorts and gear manufacturers, is back in action. To really get the ball rolling, however, the ski industry is going to have to start making it rain (dollar bills, that is) around Washington, D.C. so that members of Congress have powder days on the brain when they vote for climate change legislation. Our snow-capped mountains depend on it.