Big corporations are getting ready for carbon taxes, even if we're not 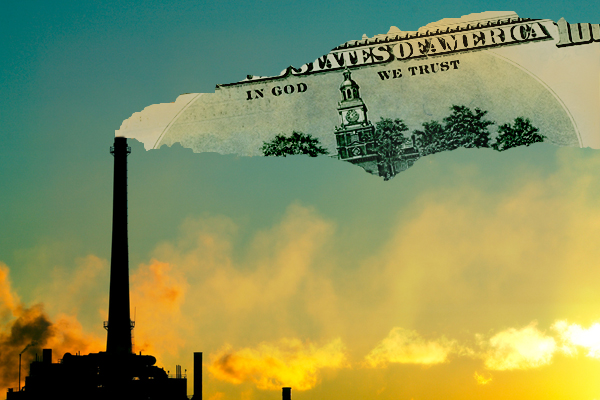 Big corporations are getting ready for carbon taxes, even if we’re not

When a promising cap-and-trade bill failed in the Senate in 2010, oil and coal companies everywhere must have breathed a sigh of relief, then probably wiped the sheen from their collective brow with a spare Benjamin and got back to work.

It now looks like some of that work involved planning for a time when they would actually lose the battle over their climate sins.

In a report [PDF] released by the UK-based Carbon Disclosure Project (CDP), 29 companies — including the five biggest oil-producers, ExxonMobil, ConocoPhillips, Chevron, BP, and Shell (not that we’re keeping track) — report that they are using carbon pricing estimates to plan for hypothetical future regulation in the U.S. This generally means that an estimated carbon price is applied to a corporation’s big-investment projects — new drilling rigs, for example — which will likely be subject to some kind of emissions tax in ten or twenty years.

For climate hawks and economists disappointed by the failure of carbon tax schemes in the real world, this may sound hopeful: At least SOMEONE believes that carbon-pricing stands a chance, and soon, too. But it’s also just good business: With California’s fledgling cap-and trade market getting under way, and public opinion on climate change swinging back toward sanity, carbon tax is looking less and less utopian and more like a plausible business expense.

The CDP claims that the usage of internal carbon prices demonstrates the “assumption that addressing climate change will be both a business cost and a possible business opportunity.” Basically, if companies start planning now, maybe our global economy won’t go into a tailspin when we wean ourselves off fossil fuels. Plus, lots of international companies, especially ones operating in regulated Europe or Australia, are already dealing with carbon taxes in some form. Australia prices all consumer fossil fuels at about $21 per ton of carbon; for European countries it falls somewhere between $5 and $80.

ExxonMobil, king of the big five, is no stranger to the carbon debate. Despite a sordid history of funding huge anti-climate-science campaigns to widen the consensus gap between scientists and the general public, the company publicly supported a carbon tax in 2009 (while lobbying against the actual bill in Congress). In the CDP’s report, ExxonMobil had the highest reported cost — $60 per ton of carbon, by 2030 — while BP and Shell were more tentative with $40 a ton. (The U.S. government, by comparison, has set a tentative “social cost” price between $37 and $57 for 2015 [PDF].)

Even companies like Google and Disney got in on the carbon-pricing action, using auction prices from California’s cap-and-trade scheme to help set the bar. Not everyone is as committed: Walmart claimed only that their estimated price is set “flexibly,” whatever that means.

One conspicuous absence (drumroll, please): everyone’s favorite climate-denying multinational conglomerate, Koch Industries! The multibillion dollar corporation, with its history of campaigning against all things climate-science-y, has not joined the herd of oil companies in budgeting for carbon tax. The Koch-funded American Energy Alliance has spent $1.2 billion this year alone in attacking candidates who allegedly support a carbon price.

Of course, no one can guarantee that any of the companies reporting internal carbon prices aren’t engaging in other forms of shenanigans, hanky-panky, or mustache-twirling in this and other environmental areas. Xcel Energy, one of the 29 companies, was recently embroiled in an attempt to restrict access to local, renewable energy in Boulder, Colo. ExxonMobil, with all its pinkie-promises to be more sustainable, has started investing in natural gas — which is a smart move if carbon starts being taxed, but still lets them get away with plenty of other environmental shenanigans. And planning for a future carbon tax is a long way from actually supporting one. Color us cynical, but we have a hard time believing any energy company is that gung ho to undermine its business model.

I guess it’s good that someone is looking at it from a rational perspective. Maybe U.S. lawmakers will follow suit.