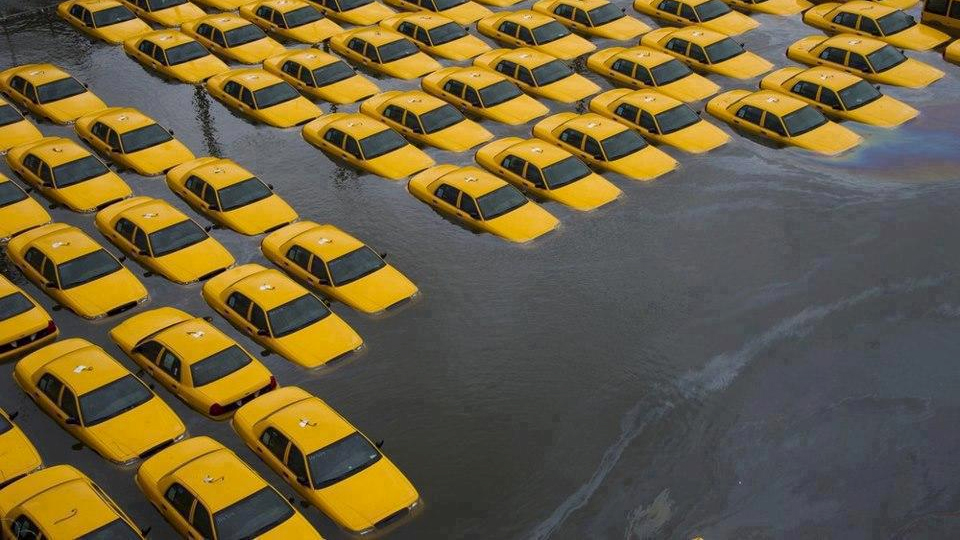 The insurance industry may have been hit by a lot of climate change-related payouts lately, but it’s still not doing much to incorporate climate risk into how it does business, according to a report released this week by Ceres, the national network of environmentally minded investment funds.

Sure, insurers (especially P&C or “Property and Casualty” insurers) have been taking some of the obvious steps — moving out of “catastrophe prone” insurance markets like the coasts of Long Island, Virginia, Delaware, and Florida. But that’s more reactive than adaptive. An insurance company that was thinking seriously about climate change could begin to sell policies that would take new risks into account — making sure, for instance, that new construction is capable of handling new weather. Instead, insurers are packing their bags and trying to push the responsibility for rebuilding after a disaster to public institutions or local populations.

Ceres paints the insurance industry as one of the few really big economic players with a clear interest in paying attention to climate change, since the old risk models that it has been using to calculate things like “How often will this town be flooded?” or “How safe is it to build a factory here?” are changing fast. A few insurance providers, especially the European re-insurers like Swiss Re and Munich Re, have been thinking about these issues for decades. But the industry in this country needs to look ahead, not just react.

As the Ceres report puts it, climate change can hit an insurance company’s bottom line in a lot more ways than just beachfront real estate:

Extreme weather is also exacerbating supply chain risks. The massive flooding in Thailand, a production hub for many global businesses, in 2011 severely impacted global parts suppliers for key sectors, including the automotive and electronic industries. This resulted in an estimated $15-20 billion in losses, impacting the profitability of major multinational corporations around the globe, including Cisco, Dell, Ford, Honda, HP, Toyota and others.

The insurance industry’s responses to this sort of thing have been getting feisty: It is successfully fighting climate-related claims, and even launching countersuits.

For exhibit No. 1, we must travel to the Inupiat Eskimo Village of Kivalina, Alaska. In 2011 Kivalina filed a lawsuit against several coal-burning utilities and energy companies for damages caused by melting sea ice that was exposing the village to severe winter storms. One of the companies being sued, AES Corporation, did what you do under those circumstances, and went to its insurance provider, Steadfast Insurance, for legal fees to fight the lawsuit.

Steadfast Insurance refused to pay, and the court agreed with Steadfast — damages caused by climate change were not covered by the liability insurance. The Inupiat ultimately lost their lawsuit anyway. But the ruling in favor of Steadfast stands as a warning for any company hoping that, if it was ever on the hook for climate change-related damages, its insurance would pony up without a fuss.

Exhibit No. 2 takes us to the greater Chicago area, where Farmers Insurance filed a class-action lawsuit against nearly 200 municipalities for failing to prepare their sewers and storm water drains for flooding. The suit stated that the neighborhoods involved should have upgraded their storm-water management plans years ago, because “they knew climate change in the past 40 years has brought rains of greater volume, greater intensity, and greater duration than pre-1970 rainfall history.” Since they didn’t do so, Farmers wanted the cities to bear some of the cost of the flood damage.

Farmers withdrew the suit not long after, on the grounds that it was “too complex” to proceed with, and that they had accomplished their main goal — terrifying local governments to the point where preparing their infrastructure for climate change became a budget priority. But the Ceres report cites it as an example of the kind of pushback that we can expect from insurance companies in the future, especially as more climate change-related litigation goes forward.

Lawsuits are an inevitable part of the American system for determining whether and how to compensate for damages, and the larger the alleged injuries from climate change, the greater the recovery efforts will be. For insurers, even when policy coverage is denied, the transactional costs, such as legal expenses, associated with these climate change-related coverage disputes are very significant.

Ceres has been delivering reports like this for a while. Doing so has become easier since the National Association of Insurance Commissioners (NAIC), in the course of pondering what it and its member institutions were going to do about this whole climate change thing, came to a very insurance-industry style conclusion: forms! More forms, definitely.

In 2010, the NAIC created something called the “Climate Risk Disclosure Survey” for its own members about their plans for dealing with climate change — which might seem like a complete waste of time, if it didn’t turn out to generate some very useful data. It had awesomely specific instructions (“Insurers are required to answer all questions in good faith and with meaningful responses”), and questions like:

A few states (California, Connecticut, Minnesota, New York, and Washington) made filling out the survey mandatory for anyone operating within their borders, and from that point on, the data set has gotten good. The survey-fillers make up 73 percent of the insurance industry operating in the U.S. Even when a company does a terrible job filling out the survey, at least they’re on public record as not having their act together.

Actually thinking about and preparing for climate change is going to be a headache for the insurance industry, just like it is for the rest of us. But in their case, there’s a clear financial incentive, and there’s an opportunity to use their data to help improve our existing climate models. There’s also the fact that insurers, if they aren’t blocked by local governments, can do a lot to make sure that property after a disaster is rebuilt more sensibly.

Will the act of publicly disclosing their climate change plans (or lack of them) persuade insurance companies to do more thinking and planning ahead? We’ll have to tune in next year to find out.