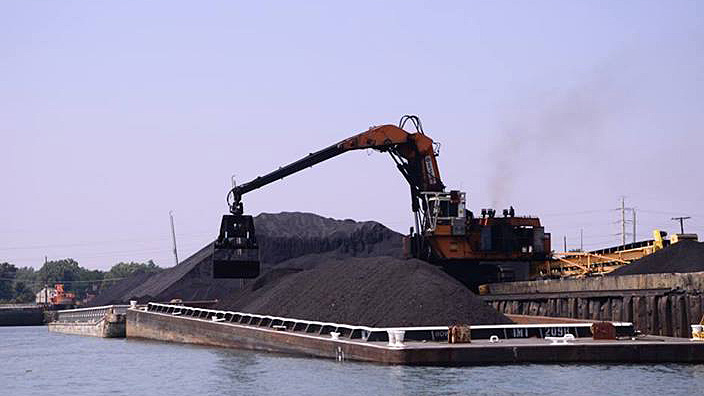 Riverfront shipping terminals in Chicago will soon be forced to be just a little bit neighborly.

Mayor Rahm Emanuel (D) announced on Thursday that the city will require piles of petcoke, coal, and other fossil fuel-related nasties to be stored indoors or under covers. That would mean an end to the open outdoor piles that currently send filthy particles billowing over surrounding homes. From a press release put out by the mayor’s office:

The proposed regulations will require large bulk material storage facilities to fully enclose solid materials such as coal, pig iron and petcoke, while facilities with smaller storage capacity and smaller deliveries would be required to install wind barriers as protective measures and adopt other best management practices. The draft regulations will be posted for public comment until January 24, 2014, and the City and Alderman John A. Pope will host a public hearing in the 10th ward in mid-January.

“We continue to make progress to stop petcoke dust from disrupting people’s lives and forcing children and families in our communities indoors,” said Ald. John Pope (10th). “These steps will allow our residents to host backyard barbecues and allow fresh air to come in through open windows.”

The Chicago Tribune reports that neighbors of the shipping terminals are heartened by the move:

Emanuel is stepping in as a BP refinery in nearby Whiting, Ind., dramatically increases its output of petroleum coke, a powdery byproduct of heavy oil piped from the tar sands region of Alberta. All of the petroleum coke, or petcoke, produced at Whiting is shipped across the state border to a pair of Chicago sites owned by KCBX Terminals, a company controlled by industrialists Charles and David Koch.

Companies have stored bulk materials in the area for decades. But as uncovered piles of petcoke grew larger this year, residents in the East Side and South Deering neighborhoods increasingly complained about gritty black clouds that spoiled summer picnics and forced parents to keep their children inside with the windows closed.

Elected officials and regulators eventually took notice of the anger and frustration. Since October, KCBX and Beemsterboer Slag Co., owner of a third riverfront storage terminal, have faced an onslaught of legal and political pressure to tamp down the dust.

“There are a lot of people in the neighborhood who want to see the piles gone altogether,” said Tom Shepherd of the Southeast Environmental Task Force. “But we are pleased the city seems to have responded quickly to our concerns.”

This is just the start of a big game of Whac-A-Mole that will play out across the nation as such piles pop up in growing numbers. The petcoke is residue left behind after heavy tar-sands oil from Canada is refined, and more and more of that oil is being imported into the U.S.

Petcoke is too dirty to be burned alone in U.S. power plants to generate electricity, but some power companies are starting to mix small quantities of it in with the coal they burn. How’s that for a filthy fossil-fuel double whammy.