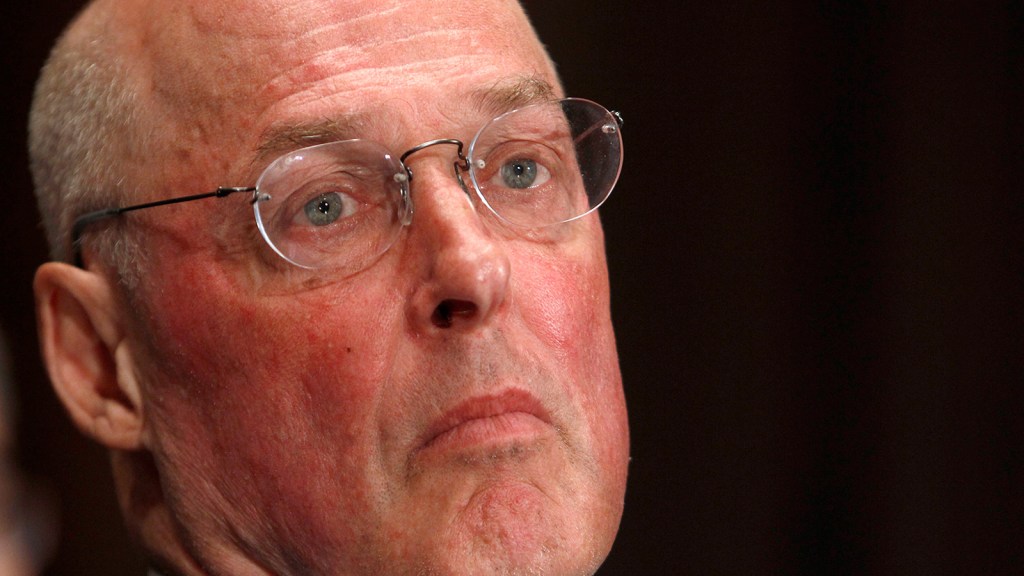 It’s not every day that a Republican finance guy — one who remembers George W. Bush as a “terrific boss” — writes an op-ed in The New York Times imploring the nation to set up a carbon tax. Not this year, anyway; just a few years ago, it might’ve been ho-hum.

Once, the carbon tax was the conservative, free-market solution to the climate problem, as opposed to the big-government, heavy-handed-regulation solution. Now that so many Republicans don’t accept that there is any climate problem at all, the whole idea just looks like another evil tax to them. And when a former Treasury secretary under the GOP flag steps forward to advocate it — to insist that we have no choice, we’re crazy not to act fast and act big — it’s news.

In June of 2006, Henry Paulson left a position as CEO of Goldman Sachs to become secretary of the Treasury. At the time, Paulson reports telling President Bush and his economic team that he was fairly sure the country was headed for a financial crisis before the end of Bush’s last term, based on the size of hedge funds and the lack of transparency in the over-the-counter derivative market, though he wasn’t sure how specifically the collapse would happen.

When the crash happened a little over a year later, Paulson found himself bailing out the same financial institutions whose irresponsibility led to the collapse in the first place. “If you take a risk and make money? That’s good,” he told a reporter, years later. “But if you take a risk and the government has to come in and save you? Well, I understood the anger.”

With history like this behind it, Paulson’s op-ed makes for some fascinating reading. Since stepping down from the Treasury in 2009, Paulson has fallen in with Tom Steyer and Michael Bloomberg, two other ex-finance guys who are trying to fold the financial risks associated with climate change into financial markets themselves, rather than outsourcing them to the government.

“Some members of my political party worry that pricing carbon is a ‘big government’ intervention,” Paulson writes. “In fact, it will reduce the role of government, which, on our present course, increasingly will be called on to help communities and regions affected by climate-related disasters like floods, drought-related crop failures and extreme weather like tornadoes, hurricanes and other violent storms.” Tuesday morning, Paulson, Steyer, and Bloomberg will release “Risky Business” — an ambitious attempt to translate the danger posed by climate change into financial terms.

“The nature of a crisis is its unpredictability,” Paulson writes:

And as we all witnessed during the financial crisis, a chain reaction of cascading failures ensued from one intertwined part of the system to the next. It’s easy to see a single part in motion. It’s not so easy to calculate the resulting domino effect. That sort of contagion nearly took down the global financial system.

With that experience indelibly affecting my perspective, viewing climate change in terms of risk assessment and risk management makes clear to me that taking a cautiously conservative stance — that is, waiting for more information before acting — is actually taking a very radical risk. We’ll never know enough to resolve all of the uncertainties. But we know enough to recognize that we must act now.

In other words: Caution is the new risk. Paulson’s mechanism for mitigating that risk is such a fundamentally conservative approach that it’s a reminder of how much the dialogue on climate change has shifted within the Republican Party. It’s strange to be applauding Paulson for breaking ranks when, just a few years ago, the ranks were exactly where he is now. But hooray anyway.