When it comes to climate change, the dark truth is that most people couldn’t care less about it crippling the environment. So instead, let’s talk about something people tend to think about: dollars.

A new study, published in Nature on Wednesday, suggests in pretty strong terms that climate change will do some serious wallet damage on a global scale. On average, the authors predict we’ll see a 23 percent reduction in projected global output by 2100 due to climate change (relative to a world without it). Until now, that kind of catastrophic shock to the economy was considered to be more or less a worst-case scenario — but now, it’s looking like it might be par for the course.

“Historically, people have considered a 20 percent decline in global Gross Domestic Product to be a black swan: a low-probability catastrophe,” said co-author Solomon Hsiang of U.C. Berkeley in a statement. “We’re finding it’s more like the middle-of-the-road forecast.”

The leading models of climate-change-induced damage that are used to inform policymaking — known as integrated assessment models — have also apparently fallen short of predicting the full extent of the economic damage laid out in the study. Commenting on the paper in Nature, University of Gothenburg environmental economist Thomas Sterner wrote, “[co-author Marshall] Burke and colleagues’ results suggest that these damage predictions, and thus also the social cost of carbon, need to be raised by several hundred per cent.”

The study’s authors suggest that the relationship between climate change and economic output can be understood by looking at land and worker productivity, which are both reliably related to temperature changes. The optimal temperature for economic productivity, in case you’re wondering, is about 55 degrees F.

Warming above this value causes output to dip, and the hotter a country is on average, the more devastating the effect of a one-degree increase in temperature. But for countries with average temperatures below 55 degrees — including Russia, Canada, and most of Europe — climate change could provide a positive economic boost. These dynamics complicate the already complicated negotiating positions of parties heading into the Paris Climate Conference at the end of this year.

As is the rule, poorer countries in the Global South are expected to take the hardest hits. The study authors’ models show Brazil taking an 83 percent hit and India a 92 percent decrease in per capita GDP by 2100, compared to a world without climate change. Check out this interactive map to see how climate change is projected to affect each country’s economy.

The authors also predict that some countries will benefit from a warming world. Russia, for example, stands to see a 419 percent increase in GDP per capita by 2100 due to climate change. That may happen due to a warming climate thawing out new fields for farming opportunities, for example, or via access to new Arctic oil reserves, or simply because (as the study suggests) people are more productive workers as average temperatures approach 55 degrees F. Russia, which has been extremely reticent on climate action, recently submitted a pledge to the U.N. detailing how it intends to combat climate change — but left enough ambiguity in the language to allow for an increase in its greenhouse gas emissions of up to 50 percent relative to 2012 levels.

The figures below show projected warming situations under business-as-usual and an aggressive climate policy scenario. In the warming world on the left, we’re likely to experience the squeeze of Burke and colleagues’ socioeconomic stressors. 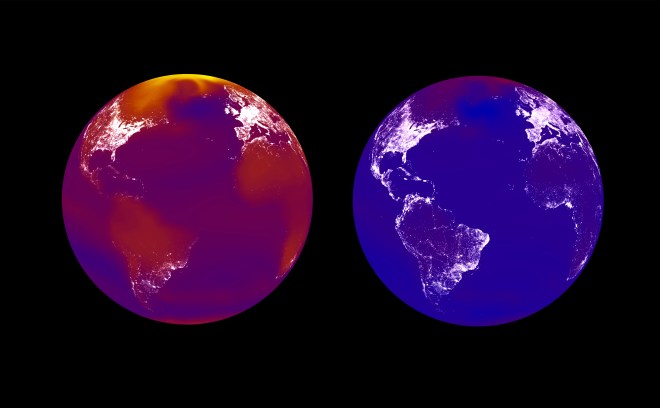 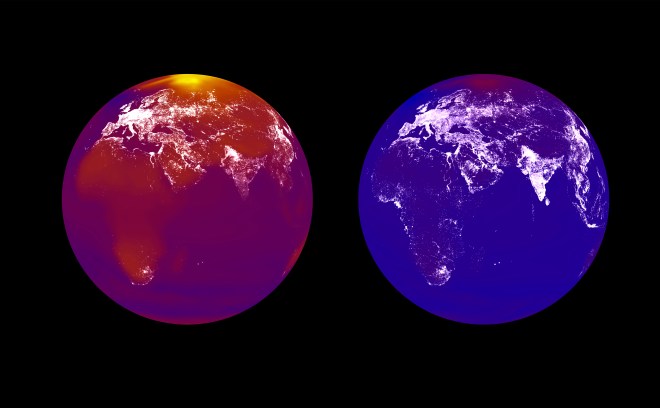 Here’s to the blue marble on the right.

Paying extra to get that new iPhone faster? It’s a bad deal