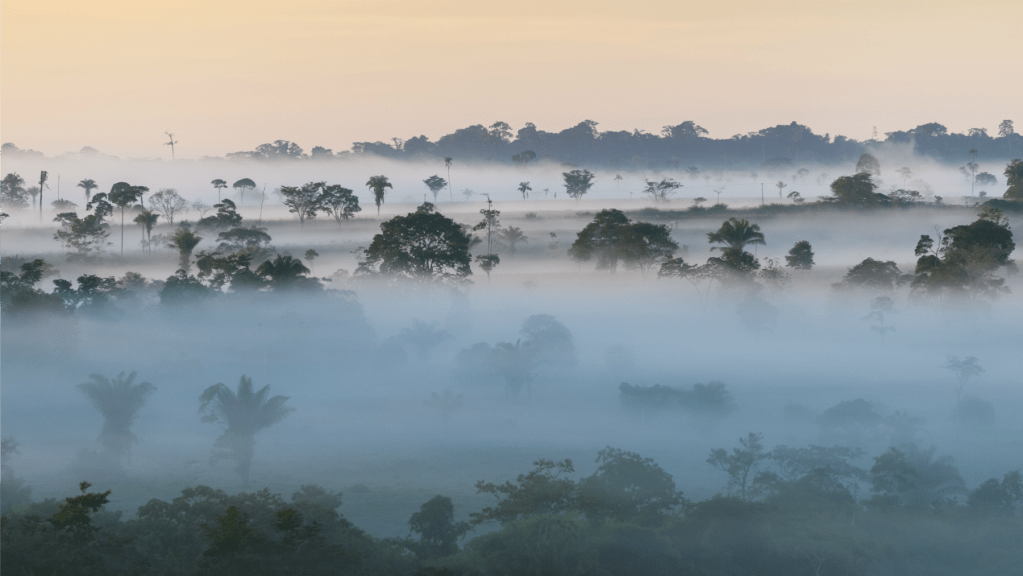 A few years ago in a lab in Panama, Klaus Winter tried to conjure the future. A plant physiologist at the Smithsonian Tropical Research Institute, he planted seedlings of 10 tropical tree species in small, geodesic greenhouses. Some he allowed to grow in the kind of environment they were used to out in the forest, around 79 degrees F. Others, he subjected to uncomfortably high temperatures. Still others, unbearably high temperatures — up to a daily average temperature of 95 F and a peak of 102 F. That’s about as hot as Earth has ever been.

It’s also the kind of environment tropical trees have a good chance of living in by the end of this century, thanks to climate change. Winter wanted to see how they would do.

The answer came as a surprise to those accustomed to dire warnings that climate change will turn the Amazon into a desert. The vast majority of Winter’s seedlings didn’t die. In fact, most thrived at significantly warmer temperatures than they experience today, growing faster and larger. Just two species succumbed to the heat, and only at the very highest temperatures. The trees’ success echoes paleontological data, which hints that warmer temperatures can be a boon for tropical forests. After all, the last time Earth experienced average temperatures of 95 F, there were rainforests in Michigan and palm trees in the Arctic.

Mass extinctions will open ecological niches, and environmental changes will create new ones. New creatures will evolve to fill them, guided by unforeseen selection pressures. What this new world will look like, exactly, is impossible to predict, and humans aren’t guaranteed to survive in it. (And that’s if civilization somehow manages to survive the climate disasters coming its way in the meantime, from superstorms to sea level rise to agriculture-destroying droughts). Still, experiments like Winter’s offer a glimpse.

Adapting to a warmer world will be long and painful process for the rainforest, and many species won’t make it through. Even so, “there will still be tropical forests in 2100,” says Simon Lewis, a plant ecologist at University College London and the University of Leeds. They will probably even contain many of the same species ecologists know today, including some of the trees in Winter’s experiments.

It’s the relationships between those species, and the role each plays in the ecosystem, that will change — and, in turn, transform the entire forest. “The forests that come out of this change are probably going to be much different than the kinds of forests we have today,” says Christopher Dick, an evolutionary geneticist who studies tropical trees at the University of Michigan.

Winter’s data hints at one such change in forest structure. The three species that did the best under the highest temperature regime were the coralwood tree (Adenanthera pavonina) a species of fig tree called Ficus insipida, and the balsa tree (Ochroma pyramidale). Each is what Winter called “pioneer species,” fast-growing trees that can quickly move into cleared areas and take over. (F. insipida ups the ante, beginning life as vine that climbs up dead trees — and also living ones, eventually strangling them.)

These kinds of species are vital to a healthy rainforest, helping it regenerate after destructive events like a flood or the death and collapse of a large tree (when those things fall, they take out everything around them). But a mature rainforest needs the species that show up later, too. Those tend to be larger and longer-lived, stabilizing the forest and serving as ecological linchpins for insects, birds, monkeys, vines, and the rest of the ecosystem for decades or even centuries. And it was those so-called “climax species” that suffered the most under higher temperatures in Winter’s experiments.

That suggests that as climax tree species die in a warmer forest, they won’t be replaced. “One would expect that tropical futures of the future would be dominated by those nimble species that can disperse very well,” Lewis says. Pioneer trees that will put down roots anywhere, vines that grow into every nook and cranny, small rodents that reproduce quickly and scurry far, birds that can fly over vast swaths of land and aren’t too picky about where they nest. But that’s a small subset of the thousands of species found in tropical forests today. Without the rest of them, the rainforest will be a much simpler place.

Disturbingly, scientists have observed something similar happening in the ocean. Much of the carbon dioxide humans release into the atmosphere is eventually absorbed by the sea, gradually making the water more and more acidic. This process of ocean acidification can wreak havoc on marine invertebrates, dissolving their shells and then their fragile bodies.

But just like in the tropical forest, “there are always the winners as well as the losers of climate change,” says Ivan Nagelkerken, a marine ecologist at the University of Adelaide in Australia. To get an idea of which species might thrive under ocean acidification, he headed to two places where underwater vents already spew carbon dioxide into the sea: Vulcano Island in Italy and White Island in New Zealand. “These CO2 vents are natural laboratories where you can get a peek into the future,” Nagelkerken explains.

As in Winter’s experiment, that future was far from lifeless. But the kind of life it supports has Nagelkerken worried. Carbon dioxide vents can occur in any marine ecosystem, from coral reefs to kelp forests to seagrass plains. But no matter where you are, life in the most acidic pockets looks strikingly similar. Immediately around a vent, all ecosystems “transform into systems that are dominated by turf algae — very short, fleshy algae with very little structural complexity,” Naglekerken explains. What’s more, “we did not observe a single predator on those vents.”

As a result, the food web is dramatically simplified, the number of fish species drops, and the ecosystem becomes “much less valuable and productive.” Small grazing fish that love turf algae will probably excel in the acidic oceans of the future. But as they take over, “everywhere will start to look like everywhere else,” Nagelkerken says.

The new, homogenous ocean won’t be good for humans. The fish that are likely to thrive in the oceans of the future — small, adaptable species such as gobies and blennies — are, simply, not fish people like to eat. And even if human tastes evolved, those fish wouldn’t fill us up; most gobies clock in at fewer than four inches long. Humans like to eat big predators, like tuna and marlin — exactly the kind of species that had disappeared from the CO2 vents Nagelkerken studied. As ocean acidification restructures marine ecosystems, the first to go will be the fish that people rely on for money and food.

Of course, Homo sapiens may be the ultimate generalist, nimble enough to survive in almost every environment. “We’re like cockroaches,” Dick says. “I think we’ll stick around. We’ll see the disaster we’ve created.” But the recovery? Maybe not. For the oceans to adapt to the new climate and regain a level of productivity they enjoy today, “it’s not going to be in a few generations,” Nagelkerken says. “You could wait around for 10,000 years.” Similarly, we might be long gone by the time the Amazon looks anything like the complex forest of today.

The flip side of mass extinction, however, is rapid evolution. And if you’re willing to take the long view — like, the million-year long view — there’s a ray of hope to be found in today’s rare species. The Amazon, in particular, is packed with plant species that pop up few and far between and don’t even come close to playing a dominant role in the forest. But they might have treasure buried in their genes.

Rare species — especially those that are only distantly related to today’s common ones — “have all kind of traits that we don’t even know about,” says Dick. Perhaps one will prove to thrive in drought, and another will effortlessly resist new pests that decimate other trees. “These are the species that have all the possibilities for becoming the next sets of dominant, important species after the climate has changed,” Dick says.

That’s why humans can’t cut them all down first, he argues. If rainforests are going to have a fighting chance of recovering their biodiversity and ecological complexity, those rare species and their priceless genes need to be ready and able to step into the spotlight. It might to be too late to save the world humanity knows and loves. But it still can still do its best to make sure the new one is just as good — someday.