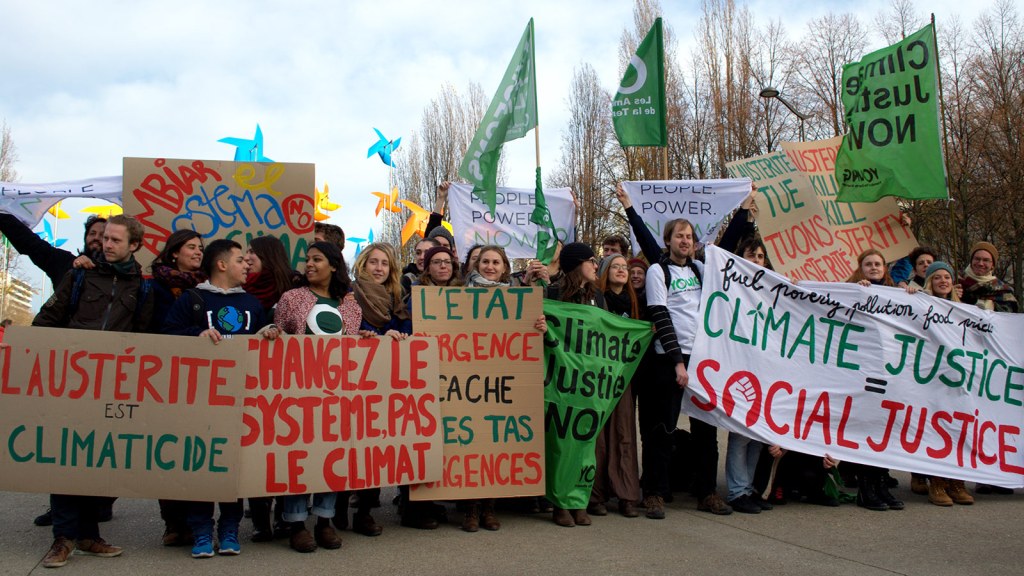 Climate activists in Paris are planning to hit the streets for a big action this Saturday, after the U.N. Climate Conference wraps up — despite the fact that the police have banned any public demonstrations.

After the terrorist attacks in Paris last month, the French government quickly imposed laws giving security services sweeping new powers. Police are now allowed to place suspected criminals on house arrest for up to 12 hours a day, conduct searches without warrants, and shut down any websites they deem a threat to national security. These measures were originally limited to three months after the attacks, but now the French Parliament could extend them indefinitely. Some climate activists were put under house arrest before the Climate Summit started, and a big march and other actions that had been planned for the start of the conference were cancelled and replaced by much more muted demonstrations.

Many climate activists, among others, are not happy about the government suppression. Author and activist Naomi Klein has been one of the outspoken advocates for freedom of assembly and civil disobedience. “The French government, under cover of anti-terrorism laws, … [is] shamefully banning peaceful demonstrations and using emergency powers to pre-emptively detain key activists,” she said at the start of the conference.

Now Klein is teaming up with activist group 350.org to call for massing on the streets of Paris this Saturday. At noon on Dec. 12 (12/12/12), climate activists will march toward a single, as-yet-unannounced meeting point in the city. From the D12.paris website:

As the Paris Climate Summit ends, thousands of people will be back in the streets to have the final word and show that we’re taking our future into our own hands, setting the stage for more action in 2016. …

Negotiators arrived in Paris with proposals for action that already cross red lines of climate safety, and all signs point to the final deal being even weaker. That means we must continue pushing for real action, even after talks conclude.

On December 12, we will honor the victims of climate change with beautiful things to see and build, and make plans with the global movement that has gathered in Paris for the coming years. We will lay down red lines of climate safety that must not be crossed, and collectively pledge to act so that they are not.

Not in Paris? You can participate whatever you happen to be on Dec. 12 at noon.