How world leaders came to agree on a landmark climate deal 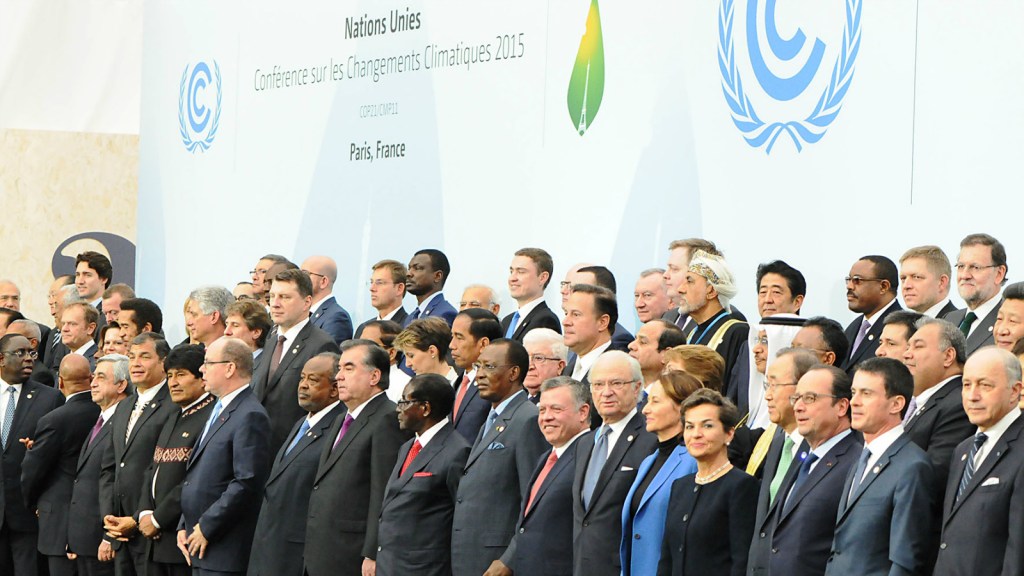 How world leaders came to agree on a landmark climate deal

PARIS, France — There was relief and celebration in Paris Saturday evening, as officials from more than 190 countries swept aside monumental differences and agreed to an unprecedented global deal to tackle climate change.

The historic accord, known as the Paris Agreement, includes emissions-slashing commitments from individual countries and promises to help poorer nations adapt to the damaging effects of a warming world. Negotiators also agreed on measures to revise, strengthen, and scrutinize countries’ contributions going forward.

“This is a tremendous victory for all our citizens,” said Secretary of State John Kerry during the final session of the summit. “It’s a victory for all of the planet and for future generations.”

However, the deal leaves some key decisions to the future, and it is widely recognized as not representing an ultimate solution to climate change. Instead, it sets out the rules of the road for the next 10 to 15 years and establishes an unprecedented international legal basis for addressing climate issues. Within the agreement, nearly every country on Earth laid out its own plan for curbing greenhouse gas emissions. Although those individual plans are not legally binding, the core agreement itself is.

The deal sets a long-term goal of keeping the increase in the global temperature to “well below” 2 degrees Celsius (3.6 degrees Fahrenheit) above pre-industrial levels and calls on countries to “pursue efforts” to limit the increase to 1.5 degrees C. It adds that “parties aim to reach a global peaking of greenhouse gas emissions as soon as possible.”

French Foreign Minister Laurent Fabius, who has served as chair of the two-week summit, said the deal is the most ambitious step ever taken by the international community to confront climate change.

With this the deal, President Barack Obama clinched a major foreign policy success years in the making and secured long-term action on climate change as a core part of his legacy, despite extraordinary opposition at home from the Republican majority in Congress. During the second week of the talks in Paris, Kerry was a driving force, delivering several high-profile speeches in which he sought to cast the United States as a leader on climate action. For Kerry, who has been a prominent voice in climate summits for two decades, it was essential to craft a deal to which the United States could agree and not to return home empty-handed.

The deal signals that world leaders are now committed to responding to the dire scientific warnings about the impacts of warming. Rising concentrations of carbon dioxide in the atmosphere from burning fossil fuels and other human activities are threatening to usher in an era of rising sea levels, sinking islands, scorching heat waves, devastating droughts, mass human migration, and destruction of ecosystems.

Among the deal’s biggest successes is a commitment to produce a global review of climate progress by 2018 and to bring countries back to the negotiating table by 2020 to present climate targets that “will represent a progression beyond the Party’s then-current” target. In other words, countries are committed to ramping up their ambition in the short term. This was an essential item for many people here, since the current raft of targets only keeps global warming to at best 2.7 degrees C, not 1.5 degrees. The deal also promises to hold every country accountable to the same standard of transparency in measuring and reporting their greenhouse gas emissions; this was a provision that the United States had pushed hard for in order to ensure that other big polluters such as China and India abide by their promises.

“Countries have united around a historic agreement that marks a turning point in the climate crisis,” said Jennifer Morgan, global director of the climate program at the World Resources Institute. “This is a transformational long-term goal that should really send clear signals into the markets” about the imminent decline of fossil fuel consumption.

The deal is expected to be a boon for the clean energy industry, as developing and developed countries alike increase their investments in wind, solar, and other renewable energy sources. Early in the talks, a high-profile group of billionaire investors, including Bill Gates and Mark Zuckerberg, promised to pour money into clean energy research, and a critical component of the agreement is a commitment for developed countries to transfer clean technologies to developing countries.

“If we needed an economic signal from this agreement, I think this is rather remarkable,” said Michael Jacobs, a senior advisor at New Climate Economy.

Still, parts of the deal left some environmental groups unsatisfied, particularly with respect to financing for clean energy technology and climate change adaptation. The deal requires all developed countries to “provide financial assistance to assist developing country Parties with respect to both mitigation and adaptation.” Although the deal sets a floor of $100 billion a year for that assistance and calls for that number to be raised by 2025, it doesn’t specify a new higher target and does not commit any country, including the United States, to any particular share of that. The deal also specifies that nothing in it can be construed as holding countries with the biggest historical contribution to climate change — most importantly the United States — legally or financially liable for climate-change-related damages in vulnerable countries. And it provides no specific timeline for peaking and reducing global greenhouse gas emissions; according to some scientists, that will need to happen within the next few decades for the 1.5 degrees C target to be achievable.

“There’s not enough in this deal for the nations and people on the frontlines of climate change,” said Kumi Naidoo, international executive director of Greenpeace, in a statement. “It contains an inherent, ingrained injustice. The nations which caused this problem have promised too little help to the people who are already losing their lives and livelihoods.”

The task of delegates at Le Bourget, a converted airport north of Paris, over the past two weeks was substantial. After all, more than two decades of U.N.-led climate talks had failed to produce a global deal to limit greenhouse gases. The Copenhagen talks in 2009 collapsed because officials couldn’t agree on how to level the playing field between rich and poor countries, sending negotiations into a morass of recriminations. Before that, the Kyoto Protocol in 1997 also failed — the United States and China didn’t ratify it, and it only covered about 14 percent of global carbon emissions. This year’s negotiations, the 21st in the series of U.N. climate talks, had to be different.

One of the major reasons negotiators were able to reach a deal was that much of the work had been done in advance. By the time Paris rolled around, more than 150 countries had promised to change the way they use energy, detailing those changes in the form of individual commitments. Known as INDCs, these pledges formed the basis of Saturday’s deal. Of course, the INDCs won’t be legally binding, and even if most countries do manage to live up to their promises, they aren’t yet ambitious enough to prevent dangerous levels of warming.

The latest estimate is that the INDCs will limit global warming to about 2.7 degrees C above pre-industrial levels. That’s above the limit of 2 degrees C (3.6 degrees F) that scientists say is necessary to avert the worst impacts of global warming — and far above the 1.5 degrees C target that negotiators in Paris agreed to aim for. But it’s also about 1 degree C less warming than would happen if the world continued on its present course.

The Paris summit began as the largest meeting of government leaders in history (outside the U.N. building in New York) just two weeks after ISIS-affiliated terrorists killed 130 people across the city. While French officials immediately promised the talks would continue, they soon banned long-planned, massive climate protests, citing security concerns. That decision set the stage for skirmishes between police and protesters, some of whom were committed to disrupting the talks in order to highlight issues such as sponsorship from big oil companies and the plight of poorer countries. At one protest, an estimated 10,000 people formed a human chain leading to the Place de la République, the site of a spontaneous memorial to the victims of the Paris attacks. But that peaceful protest was followed by a few anarchists charging at police, which lead to scores of arrests.

But the climate talks themselves went ahead as planned. Some 40,000 heads of state, diplomats, scientists, activists, policy experts, and journalists descended on the French capital for the event. Perhaps the biggest factor driving the negotiators’ unprecedented optimism was the fact that the two biggest greenhouse gas emitters, and the world’s two biggest economies — the United States and China — had made a public show of working together to get an agreement. A landmark climate deal between the two countries in November 2014 built critical momentum. China later promised to create a national cap-and-trade program to augment a suite of emissions control policies. The Obama administration, meanwhile, pushed through its Clean Power Plan regulations, despite aggressive resistance from Republicans. Still, as the talks neared their conclusion on Friday, tensions were rising between the so-called “High Ambition Coalition” — a negotiating bloc including the United States, the European Union, and dozens of developing countries — and China and India.

Nevertheless, a rare alliance between world leaders ultimately prevailed: Pope Francis, for one, campaigned tirelessly for a climate deal ahead of the talks, decrying the “unprecedented destruction of the ecosystem.”

All of this cleared the way for large groups of developed and developing countries to cooperate at the talks. Bigger countries appeared ready to work with the 43-country-strong negotiating bloc of highly vulnerable developing nations. Recent changes of leadership in Canada and Australia, notable adversaries of climate action in recent years, switched these mid-sized players into fans of a deal before the talks. Even Russia’s Vladimir Putin seemed to have an 11th-hour change of heart — or, at least, of rhetoric — and called for action.