How are environmentalists reacting to Obama’s Clean Power Plan? 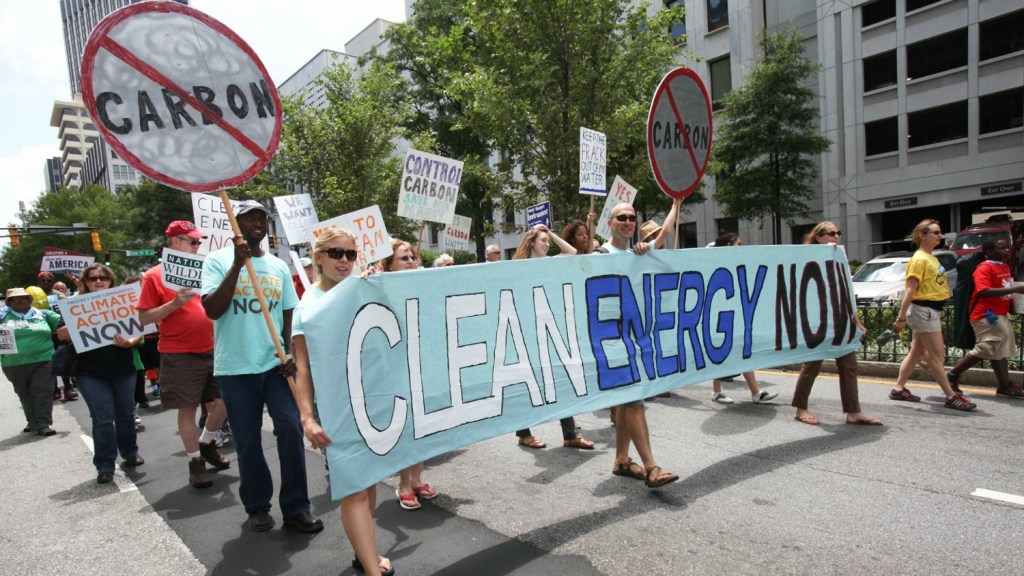 How are environmentalists reacting to Obama’s Clean Power Plan?

Now that President Obama’s Clean Power Plan has been finalized, environmentalists are practically dancing in the streets. Their public statements range in tone from celebratory to exultant. But scratch the surface and you can see that feelings in some quarters are more complicated.

On stage right, the biggest mainstream environmental organizations — which are actually center-left — are offering up unqualified praise. If asked, they will readily concede that not every detail has turned out as they would have hoped, but their overall attitude is triumphant.

“This is really a historic day, the end of the carbon-pollution era,” said Dan Lashof, COO of NextGen Climate America, in an interview with Grist. “We’re very pleased,” Sierra Club Executive Director Michael Brune told Grist. “This is something the Sierra Club has been working on, with a lot of groups, for decades. It’s the single biggest thing any president has ever done on climate change.” League of Conservation Voters President Gene Karpinski sounded like a joyful parent in a statement, saying, “I’ve never been more proud of any president.” LCV and the Sierra Club joined with six other major progressive and environmental organizations, including the Natural Resources Defense Council, Center for American Progress, and EarthJustice, to jointly announce their support for the Clean Power Plan in a press teleconference Monday afternoon.

On stage left, though, the more radical groups have a few nits to pick. Friends of the Earth — while praising the “historic step toward addressing climate disruption” in its response to the rule — struck a note of caution. The group’s criticism is primarily that the rule will not go far enough and fast enough in reducing emissions. “When measured against increasingly dire scientific warnings it is clear the rule is not enough to address our climate crisis,” FOE President Erich Pica said in the statement. “This rule is merely a down payment on the U.S’s historic climate responsibility. It isn’t enough for the U.S. to merely make reforms to our existing utility structure.”

Of course, no one, least of all Obama, is arguing that the Clean Power Plan alone is enough. It’s just one component of the president’s larger Climate Action Plan, which also includes things like fuel-efficiency standards for vehicles and regulation of methane leaks. And Obama is severely limited in what he can do without cooperation from Congress and in the face of legal threats from opponents.

Still, there are specific ways in which FOE thinks the rule could have been stronger and realistically squeezed more carbon cuts from the electricity sector. First, the group is unhappy about the final rule’s biggest change from the draft released last year: States will not have to start curbing their power plants’ emissions until 2022, instead of 2020. If we are to keep average global warming below levels that will trigger catastrophic effects — which is usually considered to be around 2 degrees Celsius — then the world has very little time left to act. “We need to be taking action today, so to delay two years is concerning,” said Kate DeAngelis, FOE’s climate and energy campaigner, to Grist.

DeAngelis also argues that the rule doesn’t set the bar high enough for decarbonizing power generation, something that hasn’t changed much from the draft last year. “[EPA] greatly underestimated states’ ability to transition to renewables,” she said. The rule gives each state its own target for reducing emissions, based on its current energy mix and its potential for cost-effectively shifting to cleaner sources. DeAngelis contends that targets could be higher in some Midwestern states like Kansas that have large wind and solar potential.

Other enviros also thought the demands on states with a current dirty energy profile were initially too weak. They may be somewhat mollified to see that the final rule flattens out the expectations between states, asking for bigger cuts from the dirtier states — but not much bigger.

The EPA anticipates that the new plan will cut carbon emissions from power plants across the country by 32 percent below 2005 levels by 2030, which is only slightly above the 30 percent cut projected in the draft plan last year. As Politico’s Michael Grunwald explains, that target just isn’t very ambitious. Power plant emissions are already down 15 percent from 2005 levels, thanks to the renewable and natural gas booms pushing out coal and the work of activists like the Sierra Club’s Beyond Coal campaign to close existing coal plants and stop new ones. The Clean Power Plan actually projects a slower rate of reduction in the next 15 years than we’ve seen in the last 10.

But there is no guarantee that utilities would keep ditching coal over the next 15 years unless they are forced to. “It’s giving utilities a little extra push in a direction they were already heading,” said Tyson Slocum, director of Public Citizen’s energy program, to Grist. “That push is important because if economic conditions change, this rule would prohibit backsliding.” So even if the price of coal goes down or the price of alternatives goes up, utilities won’t start building new coal plants.

The administration also argues that many states will likely end up exceeding their targets. The Clean Power Plan sends a signal to states, utilities, and investors that from here on out the federal government will regulate carbon emissions from power plants, and that will drive decisions to build up renewable energy capacity. No one will want to sink money into a fossil fuel power plant that’s supposed to have a 50-year lifetime if regulations will make it untenable within a few years. So the smart money would be on building power plants that run on clean energy.

DeAngelis and others also fret that the new rule hasn’t closed a loophole for natural gas. The rule considers only carbon emitted directly from power plants, but doesn’t factor in methane leakage in the production and transportation of natural gas. That could encourage utilities to switch from coal to gas instead of to renewables, even though gas might not be better for the climate over its whole life cycle. The administration addressed this concern to some extent with incentives in the final version to switch specifically to renewables.

There are other green concerns about the rule’s details. For example, it allows nuclear energy to count as clean, which may encourage utilities to keep operating nuclear plants that were otherwise slated for retirement. “Aging nukes should be allowed to just die off,” says Slocum. “The EPA rule is giving them a lifeline.” Even green fans of the plan, such as the Sierra Club’s Brune, are unhappy about anything that will extend the lifetime of existing nuclear plants. But, Brune and Slocum note, the economics of building new nukes are so daunting that there are unlikely to be many, regardless of the rule.

Still, as every environmentalist can tell you, the market cannot be trusted to eliminate dangers to public health, whether from nukes or coal-fired power plants. That’s why we have laws like the Clean Air Act, agencies like the EPA, and rules like the Clean Power Plan.