Even as Barack Obama prepares to visit India next week to talk about climate change and other issues, the Indian government is cracking down on some of the same environmental groups that play a significant role in shaping the conversation around climate in America, including 350.org, the Sierra Club, and Greenpeace.

In recent months, international and American-based NGOs have had their funds flowing into India frozen by the Indian Ministry of Home Affairs, and earlier this month, an Indian Greenpeace activist bound for the U.K. to discuss her work with members of parliament was “offloaded” from her flight in New Delhi. (The activist, Priya Pillai, addressed the Brits through Skype instead.)

Many activists see this as part of an orchestrated campaign by the Indian government to intimidate environmental NGOs. A government report prepared for the Indian Intelligence Bureau and leaked last June profiled the activities of NGOs, some based outside India and some within, framing their work as anti-development efforts backed by foreign powers to “take down” development projects and keep India in “a state of underdevelopment.” The Intelligence Bureau claimed that NGO activism had reduced India’s GDP by up to 3 percent.

Environmental activists dismiss those charges as nonsense, but they do criticize the government’s approach to development. “The government of India wants development at any cost,” Jitendra Kumar, a spokesperson for Greenpeace India, told Grist. “They don’t care about the environment.” Greenpeace figured prominently in the Intelligence Bureau report, and the Ministry of Home Affairs froze Greenpeace’s international funding soon after it leaked.

More recently, the Ministry moved to stop any international bank transfers by four U.S.-based groups — 350.org, the Sierra Club, Avaaz, and the Bank Information Center. Each of the groups has questioned one or more of India’s coal projects, and one anonymous government official told Indian press that the government worried these groups would transfer funds to Greenpeace.

Though Indian Prime Minister Narendra Modi has often touted the benefits of solar power, coal still provides 80 percent of the country’s electricity, and is central to the government’s plans to get power to the hundreds of millions of Indians who still lack it. It’s not uncommon for coal projects to be funded by foreign countries or operated by foreign corporations — Pillai, the Greenpeace activist, for instance, was on her way to speak to British politicians about environmental and human rights concerns related to a proposed coal mine that would be operated in part by Essar, a British-registered energy company.

Another example: Last year, a joint team from the Sierra Club, 350.org, Carbon Market Watch, Pacific Environment, and Friends of the Earth visited one coal project that the U.S. Export-Import Bank had funded with $650 million and found a number of human rights and environmental violations. Some locals who protested against the plant, the team found, were abducted and never found.

The Sierra Club does not actually have any bank accounts or employees in India, so the Ministry of Home Affairs’ efforts to freeze its funding are meaningless, the group said. The organization only found out that the Indian government’s eye was on it through reports in the Indian press.

Claiming that NGOs adversely impact development is not limited to the Modi government, or to the party that he leads, the BJP. The prime minister who preceded Modi, Manmohan Singh of the rival Congress Party, also fretted about anti-nuclear and anti-GMO activists derailing government-backed initiatives.

But the current Indian government’s approach to NGO-orchestrated activism may have to change. A judge with Delhi’s high court ruled Wednesday that the Ministry of Home Affairs must release 235,000 euros (roughly $265,000) transferred from Greenpeace International to the organization’s India arm. The government’s claim that the foreign funding should be frozen because Greenpeace has been placed on a “watchlist” did not hold up, Justice Rajiv Shakdher wrote, because the government didn’t present any evidence that Greenpeace was worthy of being on such a list.

“The petitioner’s disagreement with the policies of the Government of India, could not, per se, be construed as actions which are detrimental to national interest,” Shakdher wrote. “Non-Governmental Organizations often take positions, which are contrary to the policies formulated by the Government of the day. That by itself, in my view, cannot be used to portray petitioner’s action as being detrimental to national interest.” 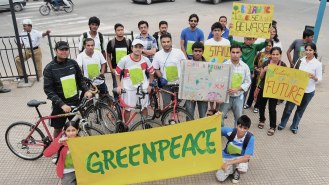 Greenpeace celebrated the ruling. “This is a vindication of our work and the role that credible NGOs play in support of India’s development,” Samit Aich, the executive director of Greenpeace India, said in a statement. Greenpeace’s Kumar said that because the government didn’t present evidence against Greenpeace, he doesn’t expect the government to appeal. For now, the funds, which the organization says represent 40 percent of its budget — the other 60 percent comes from within India — will be unfrozen.

The court order, however, pertained to just the one specific Greenpeace transfer. Other NGOs’ funds remain frozen, and whether Greenpeace’s victory will have positive implications for other environmental groups remains to be seen.

Meanwhile, the Indian government’s enthusiasm for coal, and intolerance for those who criticize it, might be a sign that it isn’t preparing to announce as ambitious an emission-reduction plan as many have been hoping, either during Obama’s visit or in the months ahead, as diplomats prepare for the crucially important U.N. climate negotiations in Paris in December.