Is there any hope for international climate talks? 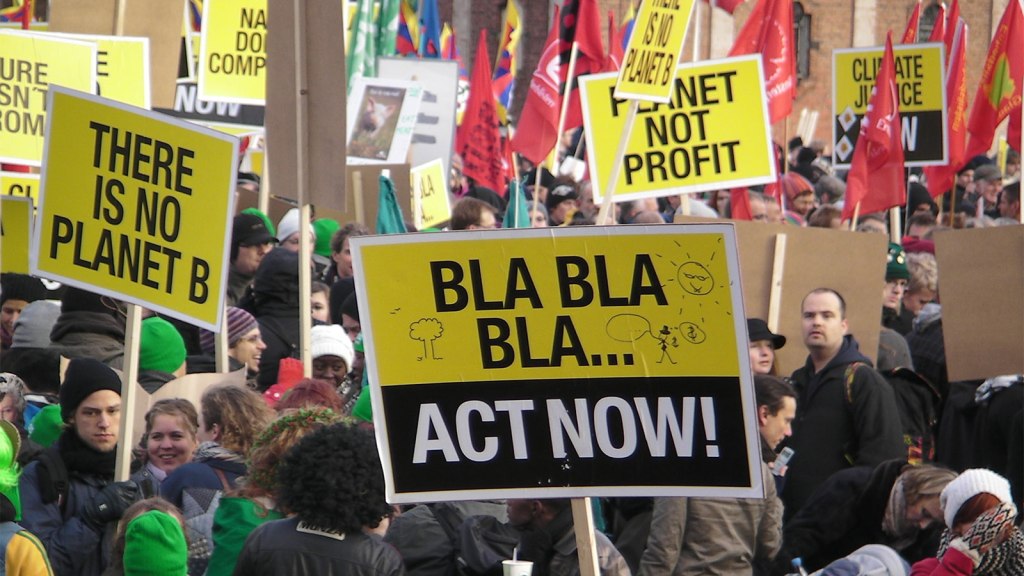 Is there any hope for international climate talks?

I don’t write very often about international climate talks because it’s super-depressing and nothing ever changes. Which I guess characterizes most things I write about, but something about climate talks in particular really drains the spirit. Nonetheless! Let’s take a fresh look at the landscape.

The original idea behind the U.N. Framework Convention on Climate Change (UNFCCC) talks was simple. Climate change is a classic tragedy of the commons. When emitting greenhouse gases, a country gets all the economic benefit but only a tiny fraction of the harm; conversely, when mitigating emissions, a country pays all the cost but receives only a tiny fraction of the benefit. I wrote about this in a recent post and Harvard’s Robert Stavins sums it up nicely in a recent op-ed:

[G]reenhouse gases mix globally in the atmosphere, and so damages are spread around the world, regardless of where the gases were emitted. Thus, any country taking action incurs the costs, but the benefits are distributed globally. This presents a classic free-rider problem: It is in the economic self-interest of virtually no country to take unilateral action, and each can reap the benefits of any countries that do act. This is why international cooperation is essential.

This has always been the logic of UNFCCC talks: burden sharing. Determine the proper way to distribute the load, and then sign a binding treaty to insure that all countries do their appointed part.

The same logic that yields the need for international cooperation, however, has made it virtually impossible to achieve in practice. Turns out national governments don’t like burdens! So the dispute over how to properly divide the burden between developed and developing countries has been as endless as it has been intractable. Early on in the UNFCCC process, developing countries like China and India were effectively exempted from the obligation to reduce emissions. What the U.S. and Europe have wanted ever since is to ditch the (arguably outmoded) developed vs. developing dichotomy, acknowledge that China et al. are going to be major sources of emissions growth this century, and sign a treaty in which all countries, including China, commit to binding targets. China disagrees, as do India and all the other countries that have so far escaped targets.

The result has been stalemate. And despite feverish hopes in the run-up to each new meeting (“last chance!”), nothing has happened to dislodge that dynamic. Yet the 2015 climate negotiations in Paris are supposed to be all about a “binding treaty.” What to do?

In many quarters, a comprehensive, binding treaty with national and global carbon targets is the holy grail. But its pursuit has led to nothing but a cycle of high hopes and crushing disappointment. There is very little hope of such a treaty in Paris, or maybe ever. What’s more, the focus on burden sharing has made the meetings a defensive, angst-ridden affair, everyone blaming everyone else while trying to minimize their own responsibility.

Most of the world’s major emitters agree that collective action on climate change is badly needed. Yet the meetings meant to facilitate such action produced little of it. Something had to change.

The idea that’s gained traction since the 2009 talks in Copenhagen is that it’s time to abandon the “burden sharing” frame altogether, give up on a binding treaty, and shift to a regime known as “pledge and review,” in which countries pledge specific policies and reductions and agree to have those policies and reductions internationally verified. Rather than being forced to accept a target, every country is simply asked to put on record what it is willing to contribute. Peer pressure and economic competition are supposed to do the rest. This is more or less what came out of Copenhagen, and Durban in 2011, and what will likely come out of Paris in 2015.

Those pledges are unlikely to add up to what’s needed to avoid 2 degrees C of warming, the stated international goal, any time soon. An outfit called Climate Interactive is tracking the pledges and adding them up; so far, they leave us on a path to exceed 4 degrees, which would be a disaster. But as John Podesta told Jeff Goodell (in the latter’s must-read story on China and climate), “If we wait until we have a binding international agreement that actually puts us on track for 2 C, we’ll hit 2 C before we get an agreement. But we have to get started if we hope to get to the destination.” Fred Pearce has a nice rundown of this general line of thinking here. It also finds clear expression in a recent op-ed from retired senators Tim Wirth and Tom Daschle.

Wirth has been working in and around international climate talks for as long as they’ve been going on. When I talked to him about pledge-and-review, he grew most animated when discussing the sheer torpor of the UNFCCC talks. “Everybody’s so depressed by the whole thing,” he said. “It’s a problem, it really is. They need a shot of energy! They need some enthusiasm! They need a new framework! Any time you run into a political dead end, you gotta change the rules. This is a way of changing the rules.”

Wirth says pledge-and-review has a chance of working because the economics have shifted and clean energy investment is increasingly in countries’ self-interest. He cites the recent New Climate Economy research project led by Nicholas Stern. Nations competing to outdo each other in these vast new markets could spark a “race to the top,” a sense of energy and progress that has been sorely missing. “We’re not saying we’re in the best of all possible worlds, by any means,” Wirth said, “but if we do it relatively soon, it’s going to end up being in everyone’s best interests.”

Wirth has a close eye on this November’s APEC meetings, where Obama and Chinese President Xi Jinping are likely to discuss climate change (among other things). A substantial bilateral agreement on climate would bring momentum into Paris, giving, Wirth laughed, “the U.S. a chance to hide behind China’s skirts and China a chance to hide behind the U.S.’s skirts. That’s important politically.” The U.S. and China being the world’s two largest markets, other countries would be pulled along. “The U.S./China relationship is so much more important than anything else in the world,” Wirth said.

Whatever the prospects of a race to the top, there remains the question of climate justice — what to do about those most vulnerable to the effects of climate change, who did little to cause the problem. Wirth points to the Green Climate Fund, which is supposed to transfer money from the developed to the developing world. But the nature of those funds is in hot dispute. In their piece, Wirth and Daschle write:

Finance is the final key to a global deal. At Copenhagen in 2009, the United States memorably pledged that developed countries would mobilize $100 billion a year in climate change assistance for the rest of the world by 2020. At a time of fiscal retrenchment in the West, the chance of that pledge being met in the form of additional development assistance is approximately zero. The pledge is eminently achievable, however, in the context of global energy investment, which has an annual flow a dozen times as large as the amount pledged in Copenhagen.

And when I talked to Wirth, that’s what he emphasized: opportunities to channel private investment money to developing countries. It appears that the climate fund is primarily going to consist in such investments.

But where does this leave the world’s poorest countries and low-lying islands? There’s a lot of adaptation to be done in those areas and not all of it is going to be a profit opportunity. Will the fund end up being just another instance of what Naomi Klein calls “disaster capitalism,” wherein wealthy westerners descend on countries reeling from misfortune and treat them as business opportunities to exploit?

The reason climate-justice advocates have always relied on the UNFCCC framework is that it’s the only venue in which the claims of vulnerable nations are guaranteed a hearing. If the meetings become nothing more than a forum for mutually advantageous bilateral and multilateral dealmaking, where is the pressure to do right by the vulnerable, much less any kind of guarantee?

I’ve never heard a good answer to that question. I sure don’t have one. But we return again to an ineluctable fact: The chances of the U.S. Senate ratifying a binding climate treaty are nil. The chances of it ratifying one that is also supported unanimously by all 195 or so countries of the UNFCCC are even niller. So what else is there to do?

“The building blocks approach, bottom up, is the only way to go,” says Wirth. “We’re not going to get a top-down agreement. So you gotta go the other direction.”