Australia has been named the worst-performing industrial country in the world on climate change in a report released at international negotiations in Peru.

The climate change performance index ranked Denmark as the best-performing country in the world, followed by Sweden and Britain.

Among the world’s top 10 emitters, Germany was ranked the highest at 22. Australia was second bottom overall, above Saudi Arabia — which was not classified as industrial.

The report states: “The new conservative Australian government has apparently made good on last year’s announcement and reversed the climate policies previously in effect. As a result, the country lost a further 21 positions in the policy evaluation compared to last year, thus replacing Canada as the worst-performing industrial country.”

China, the world’s biggest emitter, was in 45th spot — one below the U.S., which is the world’s second largest emitter of greenhouse gases that cause climate change. 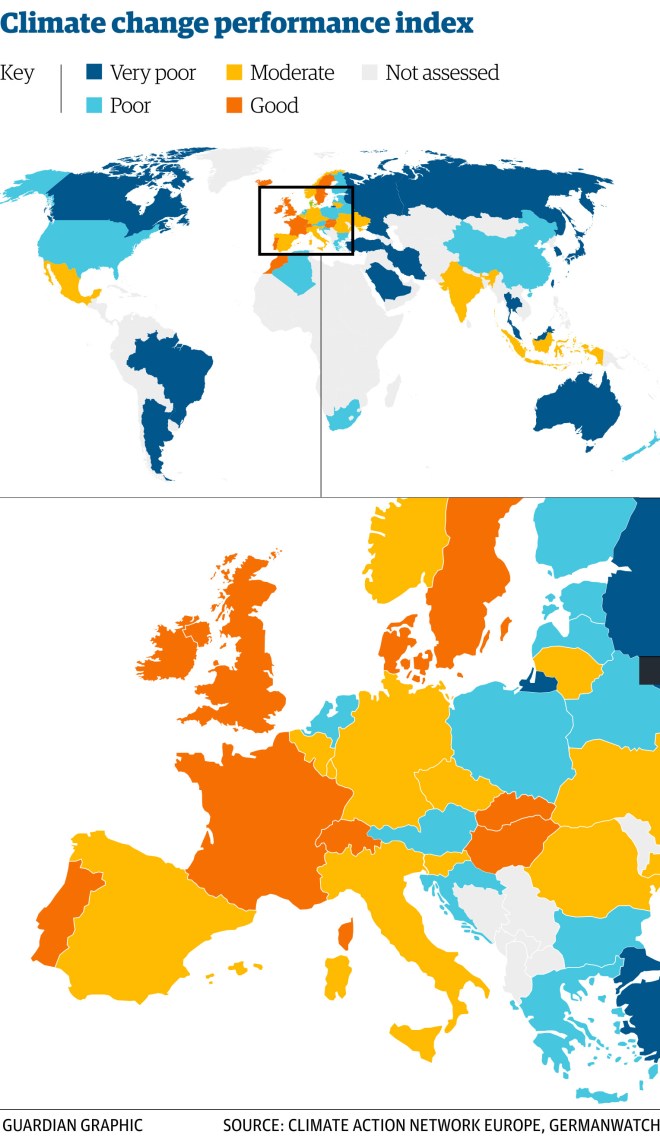 But in an indication of the challenge facing governments to increase their ambition, the report said if every country in the world performed as well as the highest-ranking countries global temperatures would still likely rise more than 2 degrees C — a level considered to be dangerous.

For that reason the top three places in the ranking were left blank.

The CCPI report, produced by the think tank Germanwatch and Climate Action Network Europe, covers the top 58 emitters of greenhouse gases in the world and about 90 percent of all energy-related emissions.

Jan Burck, report author at Germanwatch, told the Guardian: “It is interesting that the bottom six countries in the ranking – Russia, Iran, Canada, Kazakhstan, Australia, and Saudi Arabia — all have a lot of fossil fuel resources. It is a curse.

“The fossil fuel lobbies in the countries are strong. In Australia they stopped what were some very good carbon laws.” 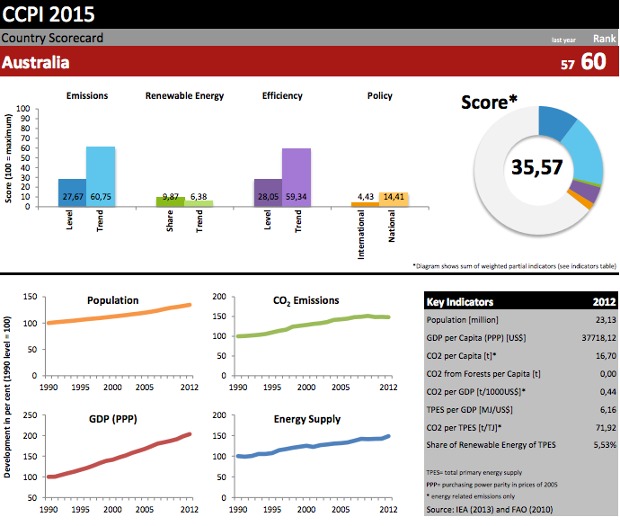 The report was released within the confines of the U.N. climate talks in Lima at the start of the second week of negotiations.

The talks are aiming to establish the draft text of a new international climate change agreement to be signed by all countries at the next major talks in Paris in late 2015.

The index covers the performance of countries across five areas — the level of emissions, the trends in emissions, energy efficiency, renewable energy policies, and the approach to climate change at national and international levels.

The report said Denmark “sets an example in how industrialized countries can not only promise, but also implement effective climate policies.”

Erwin Jackson, of the Australian charity the Climate Institute, told the Guardian: “Australia has been heading backwards by undertaking actions such as attempting to kneecap the renewable energy industry through regressive policy changes.

“We also should be playing our fair part in global action, not trying to free ride on the actions of others.”

He said Australia was “increasingly unprepared” for an emerging global shift to clean energy.

Last month, a U.N. environment program report named Australia alongside Canada, the U.S., and Mexico as the only countries that were likely to miss their current 2020 targets to cut emissions.

The 2014 Emissions Gap report said the scrapping of Australia’s carbon price meant the country was “no longer on track” to meet its target to cut emissions by 5 percent by 2020.