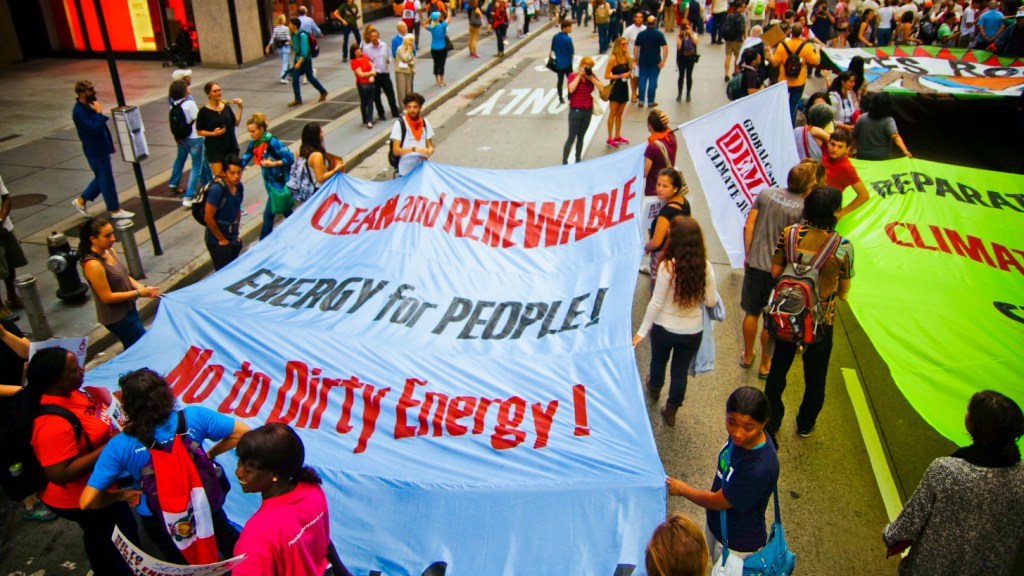 The folks who brought you the massive People’s Climate March in September are now turbocharging New York City’s efforts to combat climate change.

Activists and some of their allies in city government laid out an ambitious climate agenda Monday night in an unassuming locale: the basement of the downtown Manhattan office of municipal employees union District Council 37. With brownish-orange linoleum floors and a gray dropped ceiling, set in a stocky brown brick building, it does not seem like the kind of place from which would spring the most ambitious, innovative solutions to the world’s largest, most complex problem. But it’s more fitting than it appears.

The union’s headquarters is located right where the Hudson River overflowed during Superstorm Sandy, and was subsequently closed for 10 months because of storm damage. And DC 37’s members, who range from crossing guards to nurses’ aides in public hospitals, are on the frontlines responding to the disasters like Sandy that will become more common due to climate change. They also, being more than 100,000 strong, are a major force in New York politics. And now they’re a key member of the People’s Climate Movement NY, a local group that grew out of the organizing efforts for the march.

In the six months since the march brought an estimated 400,000 people into New York’s streets, the New York City Council has already made some progress. “[Politicians] are a lot more responsive since the climate march,” says Mark Dunlea, a spokesperson for the People’s Climate Movement NY. The council passed a law setting a target of an 80 percent reduction of greenhouse gas emissions from 2005 levels by 2050 and a law requiring employers to offer their employees the option of using pre-tax dollars for public transit. Mayor Bill de Blasio signed both. (On the state level, activists also scored a victory when Gov. Andrew Cuomo banned fracking in New York state in December.)

Although de Blasio gets all the national press for his progressive agenda, the New York City Council is just as important when it comes to writing local laws. Luckily for the activists, the council is just as liberal as the mayor: 48 of its 51 members are Democrats. Although many of those members have historically not focused on climate, the grassroots climate movement is finding that they are responsive to constituent pressure.

“We’re happy the mayor and city council are on the right side of these issues,” said Leslie Cagan, an organizer with the People’s Climate Movement, on Monday. “Not every city has that kind of leadership. But we know there are other forces with a different vision, so we can imagine the kinds of pressure our policymakers are under. So we need to encourage them to go deeper, broader, and stronger.”

Activists are now pressing the city council to pass key bills, as well as resolutions calling on state leaders to take action. The People’s Climate Movement NY is focused on three main bills, each of which has already been passed by the relevant committee. Here’s what each would do:

De Blasio spokeswoman Amy Spitalnick told Grist that the mayor supports all three of the bills. Some activists have heard otherwise, saying that de Blasio has privately expressed concerns about the clean air bill to the city council and that is why it has not passed already. But People’s Climate Movement activists are generally confident that these three bills will be passed into law.

City Council member Donovan Richards, chair of the Committee on Environmental Protection and an emerging climate leader on the council, has also introduced other climate bills. They would:

Additional bills recently introduced include one that would require businesses to shut off some lights at night and another that aims to catch more cars and trucks idling on city streets and increase the fines for idling.

One of the main challenges for a city trying to reduce its emissions is that it does not control many key levers of power. So activists are also pushing the council to pass symbolic resolutions calling on the New York state government to take certain actions, such as:

The People’s Climate Movement NY is also pushing for a resolution calling for divesting the city’s employee pension funds from fossil fuels. Here, the intended targets are the mayor, comptroller, and borough presidents, who control the city’s pension investment board.

There is little reason to think that city council resolutions alone would cause any of these things to happen. But building political will is a slow, multi-faceted process. In some cases, like the fight against Port Ambrose, demonstrating that the elected representatives of the affected communities are united in their opposition could influence Cuomo.

Climate activists might end up being more disappointed in the results of actual lawmaking. No savvy activist expects a non-binding city council resolution to deliver a statewide carbon tax. But they probably do expect a city law to have its intended effect. That cannot always be assured. Consider, for example, the proposed higher fines for idling. Plenty of laws intended to curb dangerous driver behavior, such as speeding and blocking the crosswalk, are generally not enforced by the NYPD. “Implementation is just as important as passing laws, if not even more so,” says Dunlea. That will require continued vigilance and lobbying from activists.

But first, city councilors must be motivated to pass the laws, so activists are gearing up to put on the heat. Monday’s event at the DC 37 building included detailed instructions on how to lobby your councilmember. “Their staff should know you by your first name,” said Samara Swanston, legal counsel to the city council’s Environmental Protection Committee. Her boss, councilmember Richards, thinks engaged activists can expect a good response. “I anticipate over the next year you’ll see a lot of movement,” he told the crowd.

Correction: This article originally stated that two bills from City Council member Donovan Richards have not yet be introduced. In fact they have been introduced.