New York’s famously dedicated anti-fracking activists, who last year helped push Cuomo to ban the practice entirely, have teamed up with coastal conservation groups to stop a proposed liquefied natural gas (LNG) terminal from being built 19 miles off the coast of Long Island and only 30 miles from New York Harbor, the nautical entry point at the heart of New York City. Environmentalists and residents of nearby communities, who have formed the No LNG Coalition to coordinate opposition to the project, fear gas leaks from the terminal could cause vapor clouds, fires, explosions, and damage to the ocean ecosystem. They also point out that it would be a ripe potential target for terrorists. 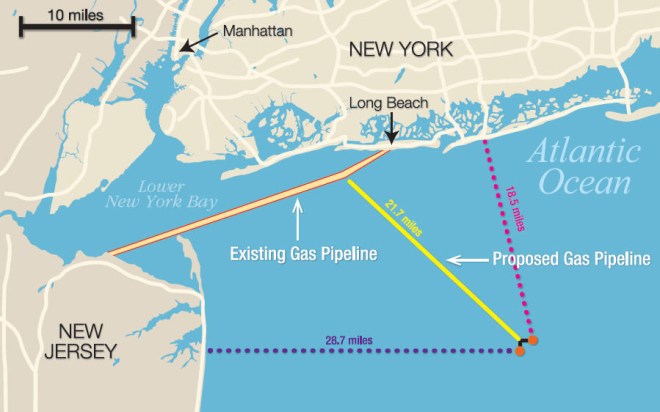 Liberty Natural Gas says the facility, called Port Ambrose, would be used for importing LNG drilled in Trinidad and Tobago. Given the plentiful supply of natural gas from the fracking boom in the nearby Marcellus Shale, and the added costs of freezing natural gas to liquefy and ship it, opponents are skeptical. They believe that Liberty’s real plan is to liquefy and export natural gas drilled in North America.

And activists fear that a new export terminal would increase the pressure for more gas drilling. So, even though they mostly hail from upstate, where there are natural gas deposits underground, the fracktivists have joined the fight against Port Ambrose. “Most people do not believe that this is going to remain an import terminal and any potential for export leads to fracking,” says Jessica Roff, downstate regional organizer for New Yorkers Against Fracking. And even if that fracking isn’t in New York state, that doesn’t mean it has no effect on New Yorkers. Fracking is rampant in neighboring Pennsylvania, and pollution doesn’t recognize state boundaries. “[Pennsylvania] is where we get a lot of our food from,” observes Roff. “It’s right on our border, close to us. Our food is connected, our waterways are connected. If the facility is built, New York is still getting fracked.”

“The whole fight [against Port Ambrose] has been energized by the fracking movement in the last few years,” says John Weber, Mid-Atlantic regional manager for the Surfrider Foundation, an advocacy group that focuses on the health of oceans and coastal ecosystems.

Liberty denies that it intends to use the terminal for export. Its CEO told the Associated Press, “This will never be an export project. … It’s crazy to try to export gas from that location; it would be the most expensive gas on the planet.” The project as currently proposed would also not have the permits or cooling technology for LNG exportation. But local activists also worry that approval of Port Ambrose would set a precedent that could lead to approval of LNG export terminals in the same area.

And fracktivists oppose building any major fossil fuel infrastructure because they are committed to the broader fight against climate change. Why, they wonder, would we invest in exporting or importing natural gas, when we should instead be building clean energy capacity? “One thing that resonates with people is the availability and desirability of alternatives,” says Patrick Robbins, spokesperson for the Sane Energy Project, a New York-based grassroots anti-fossil fuel organization. Robbins notes that the Port Ambrose site is part of an area in which the federal Bureau of Ocean Energy Management is collecting proposals for an offshore wind farm. (Liberty says the LNG terminal would only require a small portion of the area being considered for wind farms.)

The communities most at risk from this terminal are also among the most vulnerable to climate change. The nearest towns and neighborhoods are Long Beach on Long Island and the Rockaways in New York City. Both were hit hard by Hurricane Sandy’s epic storm surge. Homes were flooded, many were damaged beyond repair, and a downed power line in the Breezy Point neighborhood of the Rockaway peninsula caused a massive fire. “These are places that were deeply affected by Sandy and are still trying to recuperate,” notes Roff, who was active in Occupy Sandy.

Under federal law, the governors of “adjacent states” — in this case New Jersey, which is only 29 miles from the site, as well as New York — can veto the project. Activists in both states are focused heavily on building grassroots pressure on their governors. They’re getting the word out in potentially affected communities through local volunteers who post fliers and bring neighbors to town-hall meetings. Meanwhile, groups — including local social-justice groups like the Long Island Progressive Coalition, as well as anti-fracking and coastal conservation organizations — are asking everyone on their email lists to sign online petitions and email their governor.

Surprisingly, it is the Republican, Christie, who has been more opposed to offshore LNG terminals in the past. In 2011, Christie vetoed a very similar project also proposed by Liberty, which would have been even closer to the Jersey Shore. “I take very seriously our obligation to protect the environmental health of our coastal waters,” Christie said at the time. “Offshore LNG poses unacceptable risks to the State’s residents, natural resources, economy and security.” He talked up the need to instead “promote sustainable energy.”

But Christie may take a different view now. He is running for president, spending much of his time traveling the country, often on the taxpayers’ dime. (With an eye toward Iowa and its legions of pig farmers, he recently vetoed a popular bipartisan measure to ban tortuously small pig crates.) Activists worry that Christie will allow the Port Ambrose project to move forward because he is trying to appeal to the GOP’s rabidly pro-fossil fuel national primary voters and donors. In preparation for this run, he has been moving steadily rightward on the environment and he avoids mentioning even the possibility that rising sea levels exacerbated Hurricane Sandy.

“I think Port Ambrose will be held hostage to [Christie’s] national ambition,” says Jeff Tittel, director of the New Jersey Sierra Club. “Christie in 2010 was a different Christie. Christie now wants to be supported by the Tea Party/Koch brothers wing” of the Republican Party.

So activists are heavily focused Cuomo. He is a Democrat, after all — albeit one who is prone to saying worryingly inaccurate things about climate science. He delighted fracktivists when he announced his ban last month, but right up until that point, they were uncertain what he would do. “Even the most hardcore anti-frackers, that took us by surprise,” says Weber. Cuomo has never been interested in meeting with fracktivists, and he has studiously avoided tipping his hand on offshore LNG terminals as well. “Cuomo has been silent,” says Weber. “He’s very coy.”

Currently, the federal Maritime Administration’s environmental impact statement on Port Ambrose is going through the public-comment phase of the review process. The project’s opponents are sending in comments and turning out to the official public hearings to voice their complaints. There were more than 500 attendees at a hearing on Jan. 7 in Queens. More than 60 people testified against the Port Ambrose proposal, while only 7 testified for it, according to Robbins — and there were still people waiting to speak when the hearing ended at 11 p.m. The Long Beach City Council unanimously sent a letter to Cuomo opposing the project, and the city provided transportation for concerned citizens to get to the hearing.

After the comment period ends and a final EIS is issued this spring, Cuomo and Christie will have a 45-day period in which to issue a veto. National environmental organizations like the Natural Resources Defense Council are joining state and local groups in sounding the alarm against the project. The fracking boom may have given the fossil fuel industry new legs, but it has also emboldened a new generation of activists, and they’re ready to fight.