In oil-rich Alaska, where there’s little sunlight in the winter, solar power isn’t an obvious option.

But it is a promising one. A recent study from the U.S. Department of Energy looked at the potential of solar in 11 remote Alaskan villages and found that in many areas, it’s cost-competitive with diesel.

Some 175 Alaskan communities rely almost exclusively on petroleum products like diesel for their energy needs — not exactly an optimal situation for energy security in these remote towns, where transporting fuel comes at a high cost. People in these communities pay more for power than anywhere else in the U.S. That’s one big reason these communities could stand to diversify the energy eggs they’re putting in their resilience baskets. Since solar energy isn’t practical during the winter, it’s important that these communities rely on a combination of energy sources (wind is an option some towns have explored).

Overall, thanks to Alaska’s sunny, radiant summers, the solarscape looks more promising than you might expect given those dreary winter months. The DOE study compares the state’s solar potential to that of Germany, the world’s current poster child for all things solar and wind, which isn’t particularly sunny, either. The image below compares how much solar radiation shines down on both regions in terms of kilowatt-hours per square meter per day. 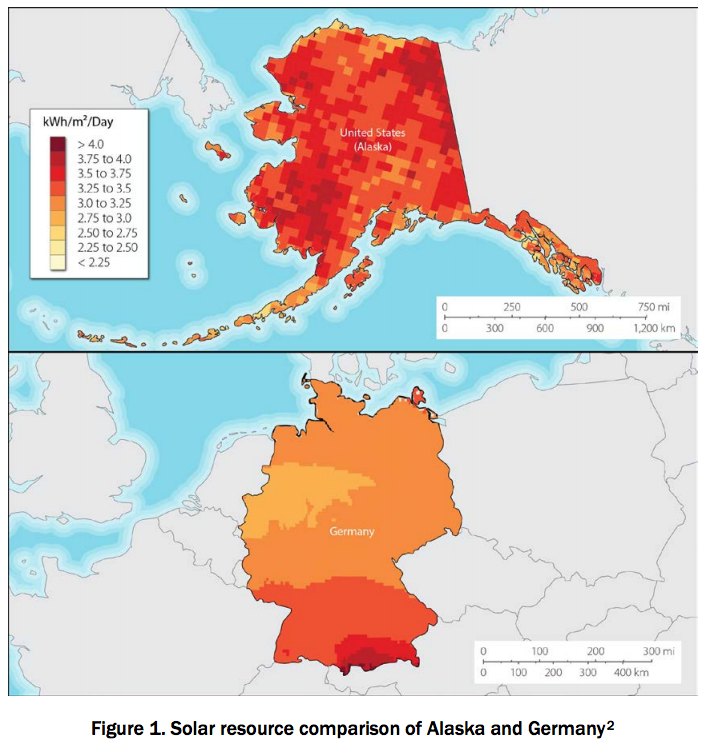 Looks like solar’s not just for sun-drenched California anymore.