An oil train that went off the tracks and burst into flames in the Columbia River Gorge in Oregon last week hasn’t been cleaned up yet, but the railroad is already back to business as usual. And many North Americans are feeling renewed anxieties about the danger of what activists call “bomb trains.”

On Friday, 16 Union Pacific train cars filled with highly combustible fracked oil from the Bakken shale formation in North Dakota derailed outside Mosier, Ore. Multiple cars caught fire, and about 100 people were evacuated from nearby homes. Elizabeth Sanchey, one of the first responders, told Oregon Public Broadcasting that the scene “looked like the apocalypse.” This weekend, a sheen of oil was spotted on the Columbia River nearby.

Mosier city officials quickly passed an emergency motion calling on Union Pacific to remove all oil from the damaged cars before the line was reopened, but Union Pacific just pushed the disabled cars to the side of the track and restarted operations. As of this writing, the cars are still filled with oil. 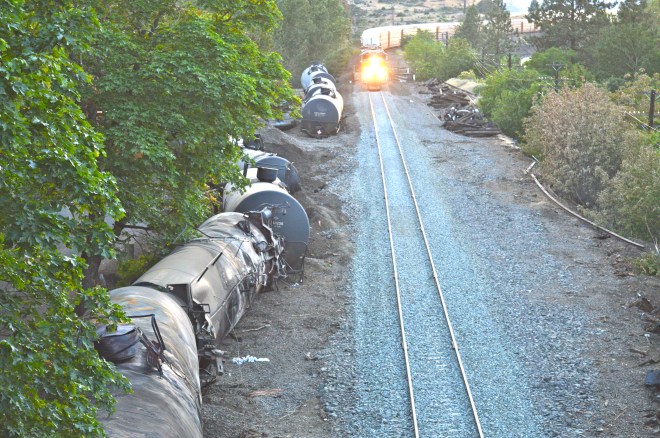 “Restarting trains before the high-risk carnage of their last accident is even cleared from the tracks is telling Mosier they are going to play a second round of Russian roulette without our town,” said Mayor Alrene Burns in a statement. “It’s totally unacceptable.”

Mosier’s citizens agree. Dozens of locals — including city officials, tribal representatives, faith leaders, and members of environmental groups — gathered in nearby Hood River, Ore., over the weekend to protest the oil trains moving through their communities. 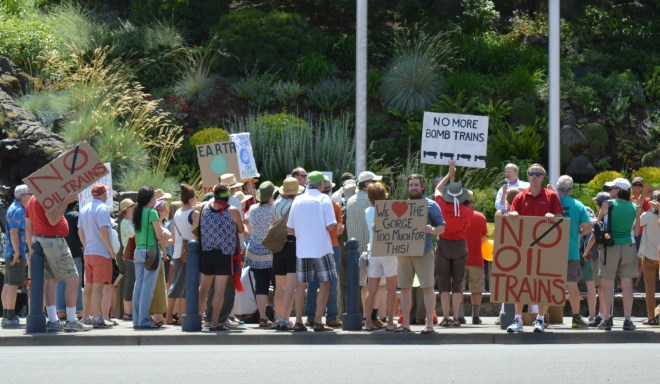 Mosier, of course, isn’t the only town at risk.

Crude oil from the Bakken shale is especially flammable, and it is transported all across the U.S. and Canada. In 2013, a train moving Bakken crude derailed in Lac-Mégantic, Quebec, killing 47 people and destroying much of the town center. It was the most deadly oil-train derailment in recent history, but it was far from the only one. In the past few years, more than a dozen derailments and explosions have occurred, leading to evacuations, oil spills, and, in some cases, fires that burned for days. 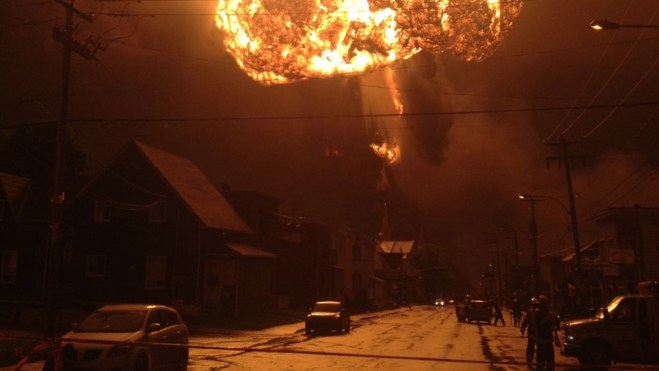 Though oil transport by rail is increasingly common, many residents have no idea that these trains are passing through their communities. (This map shows some rail lines that transport oil, as well as sites where accidents have occurred.) In 2014, national railroad operators agreed to eight voluntary measures to lower the risk of derailments, including reducing speed in some cities and increasing inspections, but communities still aren’t getting the information they would need to effectively respond to disasters, let alone prevent them.

Mosier has about 400 residents, but these oil trains aren’t only going through rural areas and small towns. They go through major American cities as well.

In Seattle, an oil train carrying nearly 100 cars derailed underneath a bridge in 2014. While all the cars were left intact and there was no public safety risk, according to officials, the incident underscored the potential for disaster. And that potential is huge: Last year, a KOMO News investigation captured video of more than a hundred train cars filled with oil rolling past the Seattle Seahawks football stadium as 32,000 fans watched a game inside. The Seattle City Council has called for railroads to curb oil train shipments through the city, but the companies have refused to comply, or even to release train schedules. And there’s no law that requires them to.

“The railroads are bringing weapons of mass destruction through our cities,” Fred Millar, oil safety and hazardous materials expert, tells Grist, and the only thing firefighters can do in the event of an explosion is to back off and let it burn.

As for Mosier, all evacuees have been allowed to return home, but their ordeal is far from over. The city’s wastewater treatment plant is offline, residents have a boil advisory for drinking water, and the full oil cars are still sitting there beside the tracks.