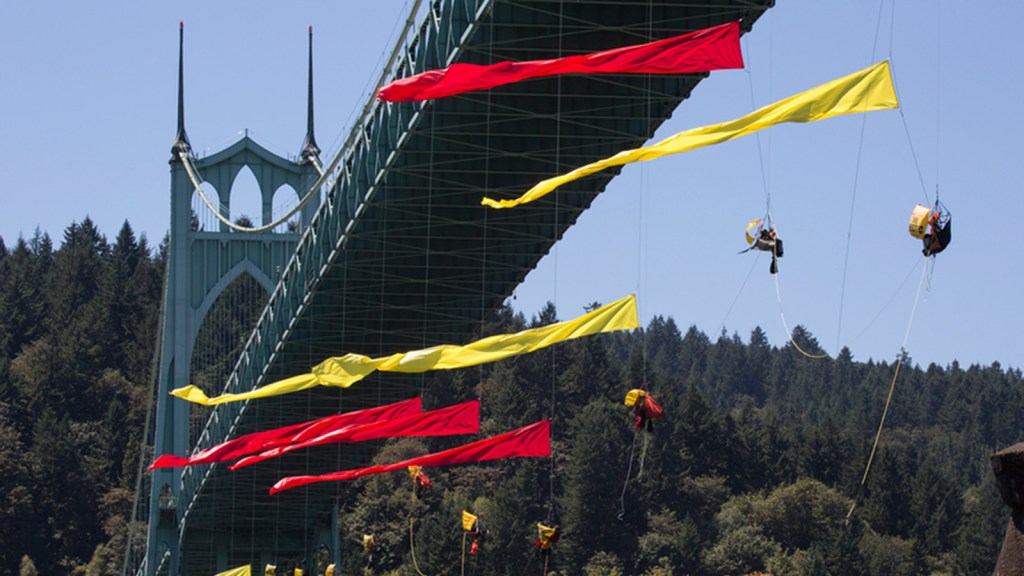 Score one for Portland in the great Pacific Northwest rivalry that no one in the rest of the world cares about.

Thirteen activists hanging from Portland’s St. Johns Bridge managed to block Shell’s icebreaking vessel the MSV Fennica from leaving the city early Thursday morning on its way to destroy the Arctic. Seattle staged a sHellNo protest of its own earlier this year against the drilling rig known as the Polar Pioneer, but while Seattle’s protest was largely a symbolic and family-friendly affair that didn’t actually stop the drilling rig from moving north, Portland’s protest seems to be getting some shit done. And we do mean shit. According to Greenpeace spokesperson Cassady Sharp, the baker’s dozen activists dangling from the St. Johns Bridge for the past 30 hours have been relieving themselves into adult diapers. Not feeling so tough now, are you Seattle?

Despite the discomfort, the activists seem in good spirits. In a Reddit AMA yesterday, a Greenpeace climber described the view:

We have an amazing river underneath us. We’re looking at Mount Hood; it’s beautiful. There are people at the park under the bridge and people have been gathered at the dock all day long supporting us. Kayaktivists have been out on the water all day. We have a forest as well, and it’s lush and gorgeous and the leaves are lighting up!

Without the the MSV Fennica, Shell won’t be able to really get going in the Arctic. According to the AP, “Shell can only drill the top sections of wells because the company doesn’t have critical emergency response equipment on site to cap a well in case of a leak. That equipment is aboard the Fennica.”

How long the activists can stick this out is unknown, but, hey, it’s Portland. If they can keep the ‘90s alive for three decades, we’re guessing they can keep this up too. Seattle: Take note.

Read what happens next: The Shell standoff in Portland comes to a dramatic end