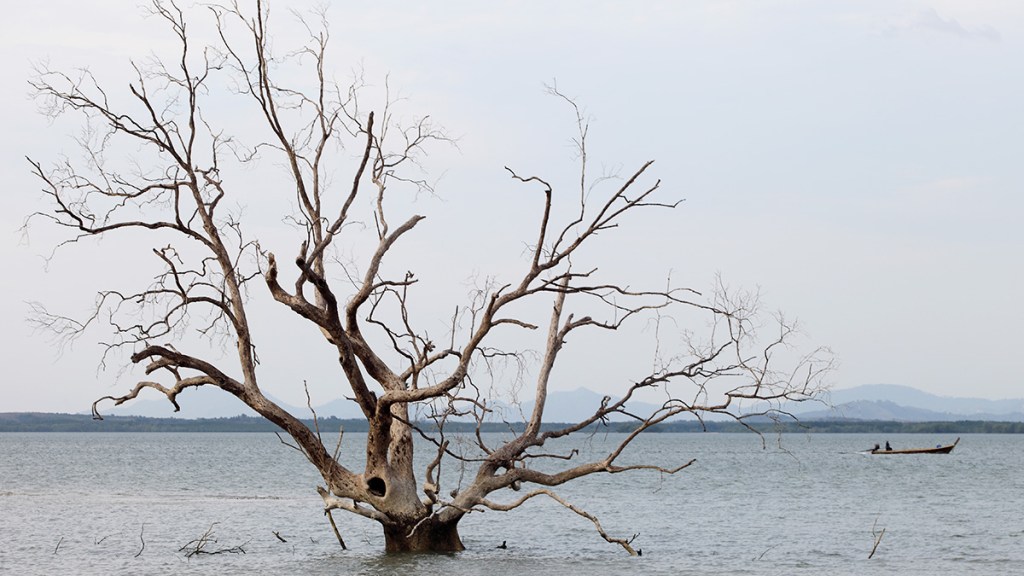 Even if the world manages to limit global warming to 2 degrees C — the target number for current climate negotiations — sea levels may still rise at least 6 meters (20 feet) above their current heights, radically reshaping the world’s coastline and affecting millions in the process.

That finding comes from a new paper published on Thursday in Science that shows how high sea levels rose the last time carbon dioxide levels were this high.

The megasharks aren’t coming back but those sea levels could be no matter what happens in December’s climate summit in Paris.

“Even if we meet that 2 degrees C target, in the past with those types of temperatures, we may be committing ourselves to this level of sea-level rise in the long term,” Andrea Dutton, a geochemist at the University of Florida and one of the study’s coauthors, said. “The decisions we make now about where we want to be in 2100 commit us on a pathway where we can’t go back. Once these ice sheets start to melt, the changes become irreversible.”

The study examined past changes and laid out a framework for using them to refine our understanding of what the future holds for coastal communities. According to separate research by Climate Central, a 20-foot sea-level rise would reshape the U.S. coast, causing Louisiana to lose its boot and transforming the Bay Area into the Bays Area by forming a second inland bay. It would also threaten the world’s coastal nations and megacities.

Sea levels have already risen about eight inches compared to pre-industrial times. That rise has helped boost the surge and flooding damage from storms like Sandy and Typhoon Haiyan, and dramatically increased the occurrence of everyday flooding during high tide in cities from Baltimore to Honolulu.

The most recent projections from the Intergovernmental Panel on Climate Change indicate that if emissions continue on their current trend, sea levels could continue to rise another 39 inches by the end of this century.

By 2050, 26 major U.S. cities will face an “emerging flooding crisis.” Globally, storm damage could cost cities from Hong Kong to Dhaka to New York trillions annually unless adaptation measures are taken. According to Climate Central estimates, 150 million or more people are currently living on land that will either be submerged or exposed to chronic flooding by 2100.

But sea-level rise isn’t going to just turn off after 2100 and according to climate scientists, current greenhouse gases are baking much more than three feet of sea-level rise into the system. The world’s oceans, ice sheets and climate are constantly performing an intricate dance. The current rate of warming could have them dancing a different routine forcing ice sheets to accommodate by melting, and sea levels in turn to rise.

“Ice sheets as we see them today appear to be out of equilibrium with the present climate,” Dutton said.

Recent research showed the West Antarctic Ice Sheet, which contains enough ice to lift sea levels 10-13 feet, appears to have entered collapse, mostly driven by warm water and, to a lesser degree, air melting its ice shelves from above and below. Those ice shelves essentially act as doorstops, keeping the rest of Antarctica’s massive stores of ice on land. Losing them would send ice tumbling to the sea and, after it melted, lapping up against the shorelines around the world.

Other parts of the Antarctic ice sheet are also less stable than previously believed and could further drive sea-level rise from the southern hemisphere’s store of ice.

The planet’s other major cache of land ice is Greenland. Its melt and contribution to sea-level rise have increased over the past decade and scientists project that it will play an increasingly larger role in raising the oceans.

In addition to looking at the deep past, Dutton’s analysis also considered the more (geologically) recent past by looking at periods around 400,000 and 125,000 years ago when global temperatures were 3.6 degrees F and 1.8 degrees F above pre-industrial times, respectively. Because they’re more recent, Dutton’s analysis was able to get better estimates of the upper bounds of sea-level rise. And those results don’t bode well for the world’s coastlines as they showed that sea levels were up to 42 feet higher than the present.

“These numbers are consistent with our study on sea-level commitment,” Anders Levermann, a sea-level rise expert at the Potsdam Institute for Climate Impact Research who authored a 2013 study, said.

Levermann said the Dutton’s approach of breaking down sea-level rise by the different ice sheets could help with regional sea-level estimates. For example, Greenland’s melt could drive up sea levels on the Eastern Seaboard in addition to having a potential impact on ocean circulation.

“We’re going to reach temperatures we had in the past periods in the next couple decades. Understanding which are most vulnerable sectors of polar ice sheets is critical to projecting future pattern of sea-level rise regionally,” Dutton said.

The big outstanding question — and the one that’s most relevant to people living along the coasts — is just how long it could take sea levels to rise to such great heights. The process isn’t linear. It’s currently accelerating and that trend is expected to continue. Dutton said her group is working on new techniques to better define the rates of rise, but other efforts have shown tipping points could cause sudden, rapid rises faster than previous estimates.

“There are some recent modeling efforts that now show you could get a section of the Antarctic ice sheet, several meters worth of sea-level rise, to go in a decade. We used to think it was centuries,” she said.