That old, rusty underwater pipeline? Nothing to worry about! 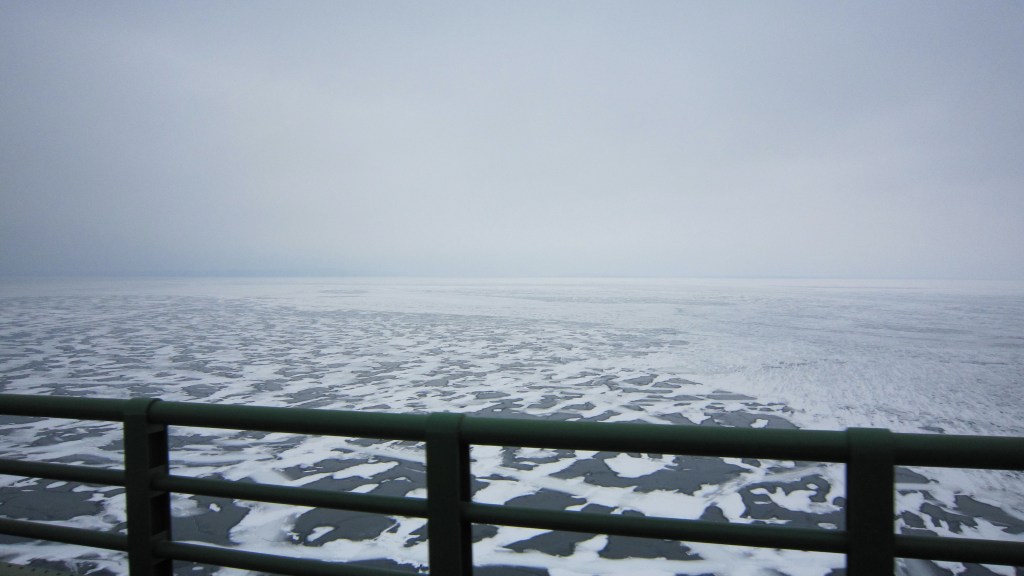 That old, rusty underwater pipeline? Nothing to worry about!

Recently, scenes from the frozen Great Lakes region have brought to mind the post-apocalyptic icy landscape of the Lands Beyond the Wall. The Straits of Mackinac in northern Michigan is currently facing its own “winter is coming” scenario, and it doesn’t involve a horde of aggressive snow zombies with a penchant for disembowelment (we hope). This threat, however, could result in the destruction of a vast ecosystem, threatening drinking water supplies and the livelihoods of local fishermen.

To stave off disaster, Michiganians are loudly voicing their concerns about a section of oil pipeline that runs along the bottom of the Straits of Mackinac, a five-mile-wide body of water separating the upper peninsula of Michigan from the rest of the state, and conjoining Lakes Michigan and Huron. Called Line 5, the segment, part of a pipeline built in 1953, has undergone minimal repairs in the past 60+ years. As production from Alberta’s tar sands has soared over recent years, many are beginning to question whether Line 5 can handle more of that oil. Pipeline owner Enbridge expanded the line’s capacity by about 10 percent last year, to nearly 23 million gallons per day. The National Wildlife Federation released a video in October 2013 showing broken supports that suggest corrosion along Line 5, and is demanding that it be replaced entirely.

Enbridge’s position is that the pipeline has “been operating there for decades and operating safely.” But plenty of things tend to operate less effectively after decades of use. A few examples: nuclear waste receptacles, Kobe Bryant’s legs, capitalism.

Enbridge already has a bad rep in Michigan after one of its pipelines burst in 2010 and poured over a million gallons of tar-sands oil into the Kalamazoo River watershed. According to the Natural Resources Defense Council, that little oopsie was the costliest pipeline disaster in the nation’s history – and, because tar-sands oil is far more difficult to clean up than the standard variety,  the cleanup is still going on three and a half years later.

A cleanup in the straits — where parts of the pipeline lie under 270 feet of water — would be much harder still, as the Associated Press notes:

The Straits of Mackinac epitomizes a potential worst-case scenario for a pipeline accident: an iconic waterway, ecologically and economically significant, that could be fiendishly hard to clean up because of swift currents and deep water that’s often covered with ice several months a year.

The oil and natural gas industry has a hell of a streak going when it comes to pipeline spills, so speaking strictly in terms of mathematical probability, Line 5 should be perfectly fine. That’s how statistics work – right?