The push to employ veterans in the solar industry 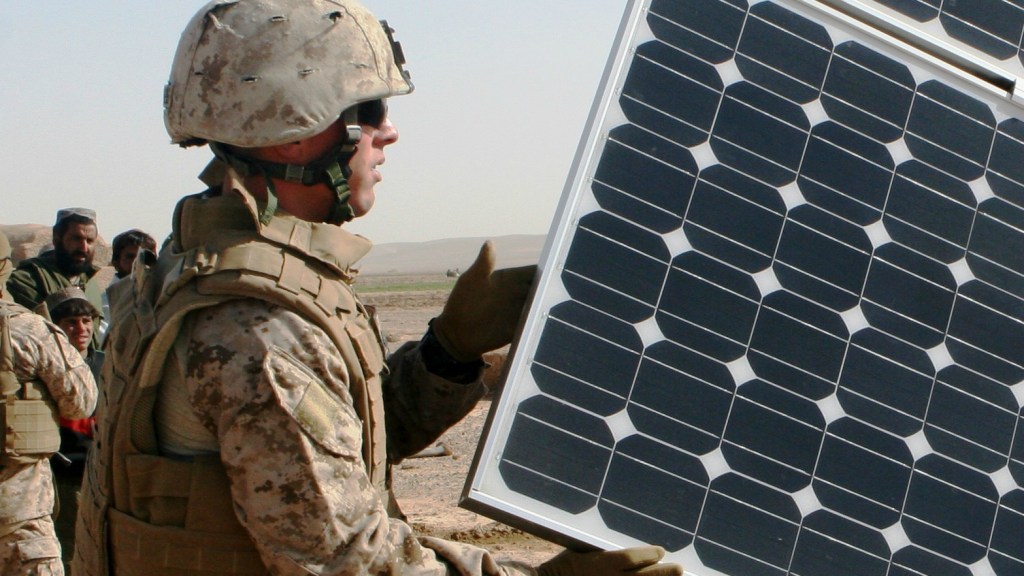 The push to employ veterans in the solar industry

Veterans know firsthand the dangerous challenges that come from fossil-fuel dependence, and many are choosing to help the country transition to a clean-energy economy when they return home.

As a veteran, I personally know the high price we pay in blood and resources to secure oil supplies, from protecting desert fuel convoys to keeping international shipping lanes open for oil tankers. The U.S. military is the largest national consumer of fossil fuels and is most vulnerable to global price shocks that cut into already shrinking budgets; this is why the Department of Defense is pushing to end its fossil fuel dependency. There’s even an upcoming documentary on the effort called The Burden (I’m an advisor on the film).

In 2004, I deployed as an Army captain to Baiji, Iraq, located just 155 miles north of Baghdad. The city is home to Iraq’s largest oil refinery, which accounted for more than a quarter of the country’s refining capacity. My tour in Iraq was served in the shadow of endless oil fires. From 2004 to 2007, the city was a known stronghold for Sunni militants who siphoned oil and petroleum products to finance their operations. Ten years later, it’s as though I am reliving history, as ISIS forces and the Iraqi Army continue to battle for control of the Baiji refinery.

After completing my Army service in 2007, I realized that I could continue to serve my country by making the case for clean-energy innovations here at home. I also found the leadership and technical skills I developed during my service made me highly sought-after by clean energy companies. My transition into the clean-energy sector has allowed me to continue my service to our nation through a committed focus to securing our energy future.

Thankfully, many other veterans — ranging from privates to general officers — are returning from war with a commitment to securing our nation’s energy future and combating the impacts of climate change. The Solar Energy Industry Association (SEIA) has recognized the tremendous value and skills that veterans bring to the solar industry. As such, SEIA and member companies like Canadian Solar (my employer), Recurrent Energy, and Clean Power Finance have made a commitment to employing 50,000 veterans in the solar industry by 2020.

According to a 2014 report from the Solar Foundation and Operation Free, as of 2013, the U.S. solar industry employed 13,192 veterans of the armed forces. This number represents 9.2 percent of all solar workers in the nation, greater than the percentage of veteran employment in the economy overall. These workers bring to the table sharp leadership skills and rigorous technical training that helps them to thrive in an industry where business management and technical innovation is highly valued.

I am proud to participate in today’s NASDAQ Opening Bell Ceremony honoring our nation’s veterans and the solar industry’s commitment to hiring them. Moreover, I am proud to support our military’s mission to Lift The Burden of its fossil fuel dependency and the Solar Ready Vets transition-training program established by the Department of Energy.

Veterans are uniquely positioned to understand the urgent need to move away from fossil fuels as a main source of energy. Adapting our country to a clean-energy economy will lessen the geopolitical and security risks our military faces on a daily basis and create valuable jobs for our servicemen and women when they return home.

Kevin Johnson is the managing director of federal business development for Canadian Solar (USA), Inc. Johnson is also a recipient of the White House Champions of Change Award and is a fellow at the Truman National Security Project.