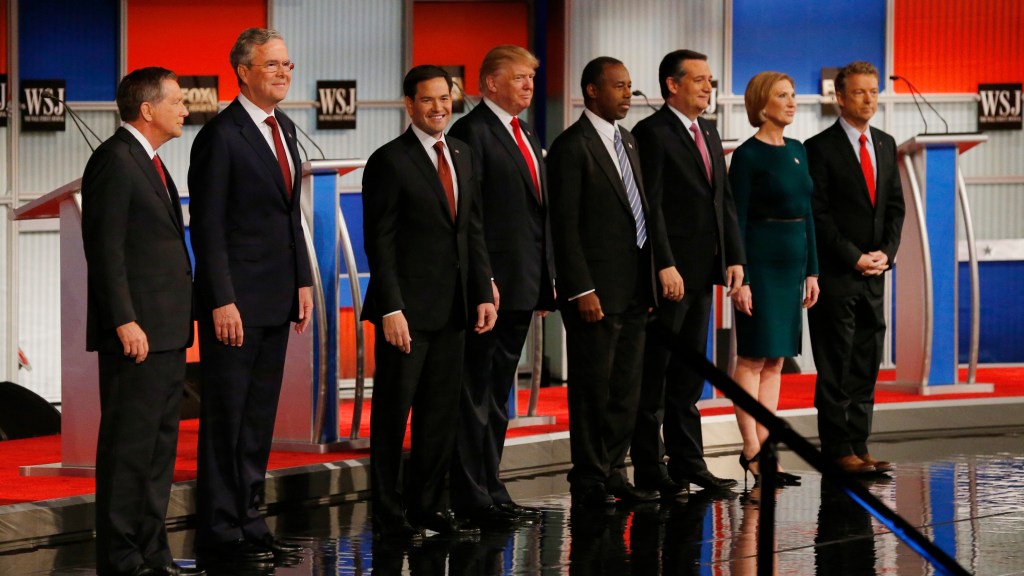 In the fourth Republican presidential debate, hosted by the Fox Business Network and The Wall Street Journal on Tuesday night, viewers finally got to hear some discussion of energy policy and the Clean Power Plan, President Obama’s major effort to curb carbon emissions. Too bad it was totally misleading.

Fox Business host and debate moderator Maria Bartiromo kicked off this aspect of the debate with the following question addressed to Sen. Rand Paul (R-Ky.):

Senator Paul, you were one of 15 Republicans to vote for an amendment which states that human activity contributed to climate change. President Obama has announced an aggressive plan to cut carbon emissions. At the same time, energy production in America has boomed. Is it possible to continue this boom, and move toward energy self-sufficiency, while at the same time pursuing a meaningful climate change program?

This question is based on two false premises. The first is Bartiromo’s implication that Paul’s vote for that amendment means he accepts climate science. As I’ve previously explained in a piece exposing Paul’s empty efforts at greenwashing and the media’s lazy, credulous reporting on it:

Merely admitting that human activity plays “at least some” role in climate change falls far short of the overwhelming scientific consensus, which is that humans are the main cause of global warming.

During that same Senate debate, Sen. Brian Schatz (D-Hawaii) sponsored an amendment saying human activity is “significantly” responsible for climate change. That was a real endorsement of climate science, and only five Republican senators voted for it. Rand Paul was not one of them. (Schatz should have gone even further and said human activity is primarily responsible for warming, which the vast majority of climate scientists agree on.)

Paul noted that distinction himself in his response. Playing up his climate denialism for the Republican primary audience, he said:

Call it quasi or soft climate science denial. Paul doesn’t deny that heat-trapping gases trap heat. He thinks that, in a remarkable coincidence, the Earth is also undergoing rapid warming of its own accord, a phenomenon for which he offers no explanation. For the record, when the Intergovernmental Panel on Climate Change found a probability of over 95 percent that climate change is caused by human activity, they did not say say that unspecified natural phenomena might be the larger cause. The excess carbon in the atmosphere that is causing global warming is clearly the direct result of burning fossil fuels and deforestation. As The Economist, a center-right magazine, put it last year: “What is no longer seriously disputed is that humans are the main agents of climate change.”

Bartiromo’s question also rests on the false premise that “energy self-sufficiency” is dependent on “energy production,” and both are threatened by the Clean Power Plan. Bartiromo is an experienced — if intensely conservative — business reporter, but she clearly does not understand the U.S. energy sector. “Energy self-sufficiency” is impossible as long as you are dependent on fossil fuels and your oil, gas, and coal companies aren’t owned by the state. Bartiromo makes the incorrect assumption that if we produce more oil domestically we will not be as subject to price increases from supply disruptions or rising demand in other countries. In fact, since oil companies are seeking profit, not serving the American public, the prices they charge American consumers will reflect the global price for oil. If the Saudis stop pumping oil, or the Chinese want to buy more of it, the price of American oil for American consumers will rise, no matter how much oil we produce domestically. If ExxonMobil controls that domestic oil production, they aren’t giving it away: If the Chinese will pay them more for it, that’s who they will sell it to.

The really key word here is “oil.” Oil is burned in the U.S. for transportation and, to a lesser extent, for home heating. It is only 1 percent of the U.S. electricity generation sector. The Clean Power plan places no restrictions on domestic oil production. It deals entirely with coal plants. Insofar as the Obama administration is reducing carbon emissions from oil, it is doing so not by restricting production but by reducing demand via higher fuel efficiency standards for cars and trucks. Unlike increased production, reduced demand for oil actually does reduce our vulnerability to changes in global oil supply or demand. While we can’t control the price of oil, if we use less of it then we will lose less money when the price rises. If Bartiromo is concerned about “energy self-sufficiency,” she should be cheering Obama for moving us towards less dependence on oil.

The U.S. energy production boom to which Bartiromo refers is from gas, oil, solar and wind, while coal production is dropping. Limiting pollution from coal plants will lead electric to utilities to shift to using more renewables and gas. The Clean Power rule doesn’t stymie the U.S. energy boom: it capitalizes on it. If U.S. coal production were to increase without demand for it domestically, Obama would be happy to let the coal companies sell their product abroad. The problem is that communities don’t want the coal export terminals being built where they live. Many environmentalists would actually prefer that the Clean Power Plan was less pro-gas and that the Obama administration would stop letting coal companies mine on federal land for way below-market rates.

But the bigger lies came later during Paul’s and Bush’s answers. And once again the problem was that Obama’s policies were falsely depicted as cracking down on fossil fuels in ways that they simply aren’t. Here’s Paul:

[Obama] has devastated my state … What we really need is somebody that understands that we do need energy of all forms, and that means we will have solar, and wind, and hydro, but we will still have coal, and we still will have natural gas. And, we’ve got to have an all of the above policy.

But it would be a mistake to shut down all of our industries in the coal fields, and shut down the coal power plants. If we did so we’re going to have a day where we wake up and some of our big cities are either very cold, or very hot.

President Obama, much to the consternation of environmentalists, embraces precisely the “all of the above” energy policy that Paul does. The Clean Energy Plan does not “shut down all of our industries in the coal fields, and shut down the coal power plants.” It gradually reduces our coal use. And it isn’t Obama who is killing the coal industry in Kentucky — it’s the market. The boom in natural gas that Republicans and conservatives such as Paul like to celebrate is making coal an uneconomical alternative. The Clean Power Plan hasn’t even taken effect yet, and it’s just riding existing economic trends. As Michael Grunwald has noted in Politico, “the plan’s projection that U.S. coal generation will drop just 30 percent from 2005 levels by 2030. It’s already dropped 20 percent — and aging coal plants with another 50 gigawatts of capacity, nearly 15 percent of the U.S. fleet, are already scheduled for retirement. In other words, the EPA expects the decline of coal to abate somewhat under the Clean Power Plan.”

Then Jeb Bush chimed in with more nonsense:

Taking two existing technologies, and applying it through innovation has created lower carbon emissions, lower energy costs — 40 percent of all the economic activity in the age of Obama has come from the energy sector, and Hillary Clinton wants to suppress that. We — I think we ought to be expanding this. High growth is the path to lower carbon, and more jobs.

I know for a fact, as Governor of the State of Florida, we created the largest land purchasing programs and environment clean-up programs because we had a growing economy. Our revenues were growing at 4.4 percent. It allowed for resources to be able to protect the natural system.

1. His claim that “40 percent of all the economic activity in the age of Obama has come from the energy sector” is wildly off. It’s more like 6 percent.

2. It’s also not true that “Hillary Clinton wants to suppress” the energy sector. Like Obama, she embraces both renewables and fossil fuel development. She refuses, for example, to agree with her opponent Bernie Sanders and climate activists who call for ending fossil fuel leasing on public lands.

1. It’s true that the, uh, “explosion of natural gas” has helped to reduce emissions, but so did many other things: the recession started under Bush’s brother; increased deployment of wind and solar energy; and social shifts like reduced driving. It is also partly because of “the central planners in Washington, D.C.,” like members of Congress. The wind production tax credit has helped, for example, as did the renewable and energy efficiency investments in the 2009 economic stimulus package. And regulations, like Obama’s fuel efficiency standards, have contributed.

2. It is generally backwards to say, “High growth is the path to lower carbon.” Any Republican, so accustomed to arguing that China’s growth renders pointless any U.S. effort to cut emissions, should know that. It is especially untrue if you’re discussing economic growth that is driven by fossil fuel development. When Bush goes on about economic growth providing resources for environmental protection, he’s conflating traditional conservation, like clean water programs 0r public parks and nature preserves, with addressing climate pollution.

This isn’t to say Bush is wrong that we should aspire to grow the economy. We should, but the trick is to figure out ways of growing while reducing emissions. And the way to do that is also the answer to Bartiromo’s concern about “energy self-sufficiency”: building up our renewable energy sector.

Unlike oil, you can’t ship solar energy to Asia. But you can sell them solar panels. If only conservatives understood how the economy works.