Neither, it turned out, could the young American activists who had set up a protest outside of the tent.

Curiously, U.N. officials (or the secretariat, as they call it here) had insisted that the protestors strip all mentions of Kerry and Keystone from their signs and banners.

The students had wanted to call attention to the fact that any pledge for America to significantly reduce emissions could be undermined by approving a pipeline that would encourage tar-sands development. Keystone XL is the opposite of climate action, their banner was supposed to show. Other handheld signs would’ve urged Kerry to be a climate leader and reject the pipeline.

In the end, the signage was neutered to look like this: 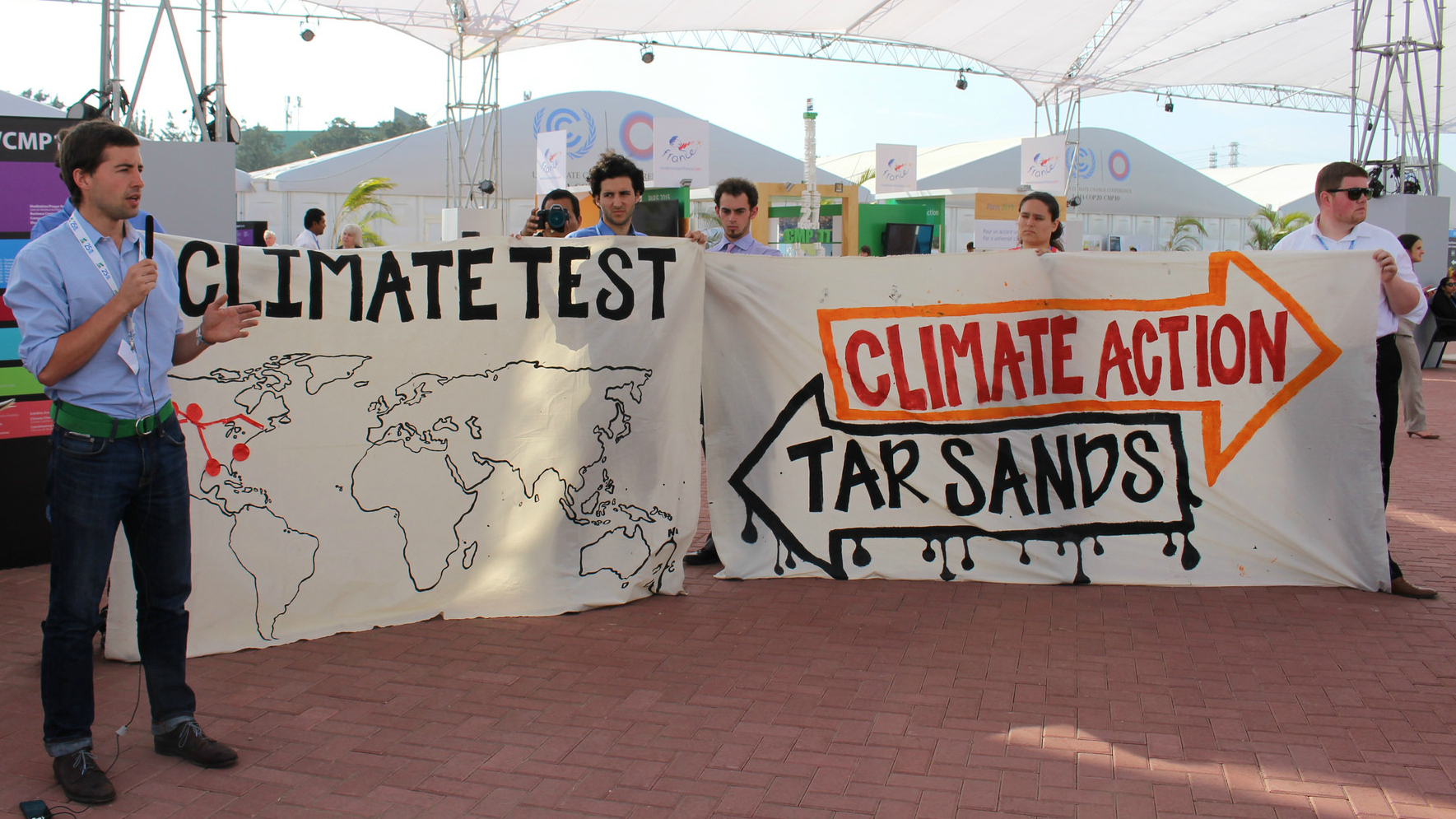 The U.N. insists that all NGOs accredited to attend the talks clear any public actions ahead of time; if they don’t, the groups can be banned from the conference site and lose access to future U.N. summits. There are regulations governing what the groups can and can’t do, but the U.N. hasn’t been very forthcoming about them.

“We looked all over their website and couldn’t find them anywhere,” said Alyssa Johnson-Kurts, a youth delegate from Vermont here with SustainUS. “We emailed and asked for them, but they never replied.”

And the elusive regulations have been applied inconsistently.

“Earlier in the week, we held protests that called out specific countries and fossil fuel projects as bad actors in the negotiations and the broader fight against climate change,” said Evan Weber of U.S. Climate Plan. “Once we approached the secretariat with a specific proposal around Kerry, the United States, and Keystone XL, suddenly this type of action was not allowed.”

Dyanna Jaye, another SustainUS rep, emailed back and forth a dozen times over the course of the week with the secretariat while planning the protest that would take place during Kerry’s speech. Over the course of that correspondence, and through face-to-face meetings with U.N. officials, the group found itself forced to strip the specific references from its banners and signs.

“It’s outrageous that the United Nations censors participants’ protests from using anything that might identify a specific proposal when it’s politically inconvenient for that story to be shared,” said Johnson-Kurts.

A few hours after the action, the U.N. forwarded the group its official regulations — a document titled (clearing throat), “Guidelines for the participation of representatives of non-governmental organizations at meetings of the bodies of the United Nations Framework Convention on Climate Change.”

I’ve just spent the past 10 minutes reviewing these guidelines, and they’re awfully vague. What little mention there is of signs and materials says nothing to prohibit the naming of people or nations or specific projects. The relevant rules:

2. Posters may be displayed only at designated locations, and only with prior permission from the secretariat. …

5. Non-governmental observers shall refrain from using the UNFCCC venues for unauthorized demonstrations, and when distributing written materials shall respect other participants’ social, cultural, religious or other opinions and refrain from personal attacks.

So the U.N.’s own written rules don’t prohibit the naming of specific people or projects. But their demand that activists get “prior permission” gives the secretariat a lot of leeway for censorship when activists’ messages might be politically inconvenient. 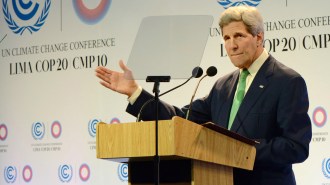 As for Kerry, though he didn’t mention Keystone, he used some pretty strong language to bash climate deniers, fossil fuels, and any rich nation that doesn’t lead on climate.

In no uncertain terms, Kerry said that “an ambitious agreement in Paris is not an option, it’s an urgent necessity.” And he described climate science as “a dramatic statement of fact that no one of good conscience or faith should ignore.”

Activists may have appreciated Kerry’s bold tone, but they wish they would have been allowed to hold his feet to the fire and demand even more.

Are you dumb if you buy a Prius when gas prices are this low? Um, no