Time for us to talk about the media’s FAVORITE THING: gas prices. There’s like maybe a slim chance you’ve already read a story about how cheap prices are at the pump. They’ve hit a four-year low, an average of about $2.70 in the U.S. — and they might drop to $2.50 by Christmas. Maybe you’ve even been to one of said pumps and experienced for yourself just how cheap gas is! But there are some environmental implications. Let’s discuss.

First, as Heather Smith already noted, the low cost of fuel has brought gas-guzzling SUVs back from the dead. It’s also making people who drive more fuel-efficient cars look stupid in the mind of one cynical Bloomberg Businessweek reporter. See: “With $2 Gas, the Toyota Prius Is for Drivers Who Stink at Math.”

It would take almost 30 years of fuel savings from the hybrid Prius to cover its price premium over the little Chevy Cruze, although that doesn’t account for the Chevy buyer making savvy investments with her savings in the meantime. It doesn’t matter, since we will all be flying around in futuristic Teslas before the Prius pays off. The all-electric Nissan gets a lot closer: The Leaf, without any gas stops, takes just 3.8 years on the road to beat the cheaper sticker price of the Cruze.

Overall, because of people who think like the Businessweek reporter, plus people who get real excited about things that are huge and loud and rumble beneath them, the average fuel economy of vehicles being purchased is now falling flat, after years of rising. This chart, via Brad Plumer at Vox, shows that the stagnation is already apparent in the last few months’ sales. 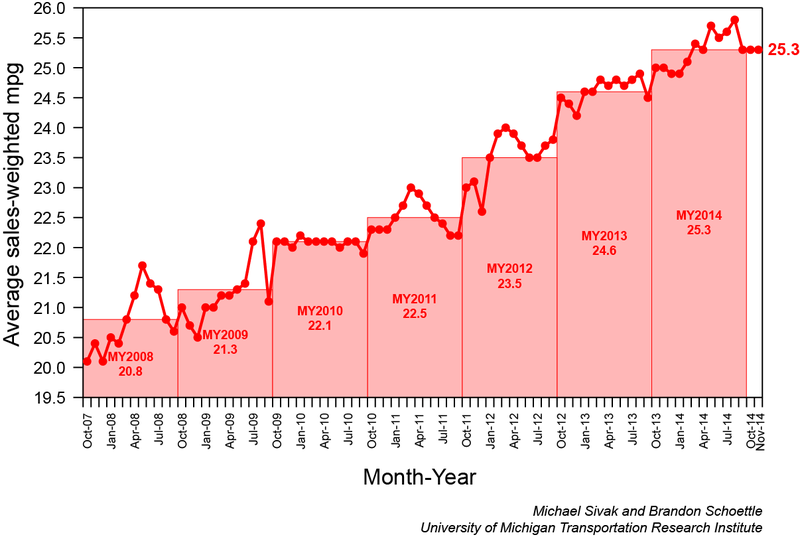 Of course, there’s one market mechanism that does have the power to make driving something like, say, a Cadillac Escalade a stupid idea, even with low gas prices: carbon pricing. California’s carbon-pricing scheme will be extended to cover vehicle fuel on Jan. 1, and that could make a difference in the long-term economics of purchasing a big ol’ traditional car over a newer, greener model. The fossil fuel lobby has been pushing hard to cast this as a hidden gas “tax” on California drivers. Many fossil fuel companies accept, in their internal accounting, that such schemes are inevitable, but they’re still fighting hard to put them off as long as possible.

And with the low gas prices, the International Energy Agency is reminding world governments that now is the perfect time — a “golden opportunity” — to get rid of subsidies for the fossil fuel industry and to put a price on carbon. From the British news site Responding to Climate Change:

Maria van der Hoeven, executive director of the International Energy Agency, said [policymakers] could consider measures that “would have been unthinkable a year ago”.

She was addressing media at the UN climate talks in Lima, where negotiators are considering a target of net zero emissions by 2050.

And while cutting fossil fuel–related emissions down to nothing by 2050 might be a long-shot scheme, world leaders are in a good place to receive this tidbit of IEA advice. It looks like diplomats will return home from the U.N. conference in Lima tasked with developing a plan for their own country to reduce emissions. Putting a price on carbon is an effective and increasingly popular way to do that.