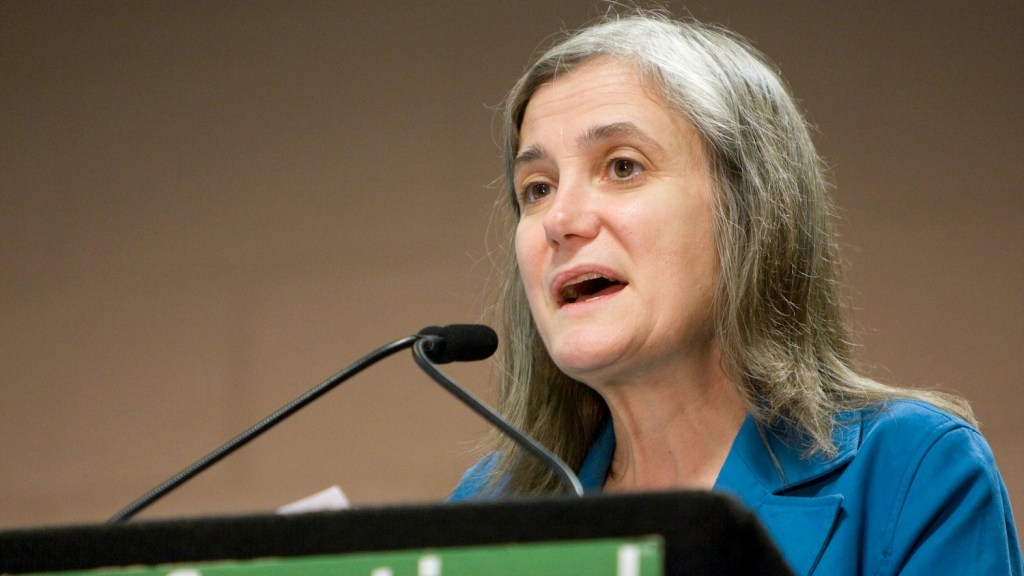 North Dakota police have issued an arrest warrant for the Democracy Now! host Amy Goodman, who has been reporting on the Native American protests against an oil pipeline, accusing her of entering “private property” to conduct interviews.

“This is an unacceptable violation of freedom of the press,” Goodman said in a statement after police accused her of criminal trespass, a misdemeanor offense.

On Sept. 3, Goodman reported at the site of the Native American-led protest of a controversial $3.8 billion oil pipeline that the Standing Rock Sioux tribe says poses a threat to its water supply and could damage its cultural heritage.

Goodman’s dispatch on the use of dogs quickly spread online and was viewed more than 13 million times on the news program’s Facebook page. Many outlets rebroadcast the footage, including CBS, NBC, NPR, and CNN, according to Democracy Now!.

A Sept.  8 criminal complaint was filed against Goodman and Cody Hall, a protest organizer. The charging document from the state’s attorney for Morton County calls on the defendants to be “arrested and dealt with according to law.”

Lindsay Wold, a special agent with the North Dakota Bureau of Criminal Investigation, wrote in an affidavit that a “large group of protesters” were blocking a highway and that employees of the Dakota Access Pipeline were working in a nearby field, “utilizing heavy equipment to clear the land.”

Security workers had formed a line to try to block the activists, Wold wrote.

The agent alleged that the protesters broke through a fence, crossed on to the private land, halted the employees from working, and assaulted security guards.

“Amy Goodman can be seen on video on the private property that is beyond the border of the fence,” Wold wrote. The agent also cited damage on Sept. 6 to the pipeline’s equipment, including a flat tire and dirt placed in the fuel tanks of several vehicles.

Democracy Now! quoted a protester at the time describing the dogs violently attacking activists: “These people are just threatening all of us with these dogs. And she, that woman over there, she was charging, and it bit somebody right in the face.”

“The dog has blood in its nose and its mouth,” Goodman said. “Why are you letting their, her dog go after the protesters? It’s covered in blood.”

Denis Moynihan, special projects coordinator for Democracy Now!, declined to comment further on Monday, but confirmed that Goodman had not been arrested. Goodman did not immediately respond to a request for comment.

Spokespeople for the sheriff and prosecutor’s office declined to comment. Deputies stopped Hall on Sept. 9, allegedly for “expired tabs,” and then arrested him for two counts of criminal trespass, the sheriff’s office said in a statement.

The U.S. Army, the Department of Justice, and the Department of the Interior, which is responsible for Native American affairs, announced on Friday that it would delay issuing permits to the pipeline to dig on federal land by the Missouri river, above the Standing Rock reservation.

The government said that it would also discuss with tribes how “to better ensure meaningful tribal input into infrastructure-related reviews and decisions and the protection of tribal lands, resources, and treaty rights.”

The pipeline is slated to transport fracked crude from the Bakken oil field in North Dakota to a refinery near Chicago, inspiring an unprecedented gathering of Native American protesters.

Some protest organizers have lamented that although the pipeline threats echo the dangers of the defeated Keystone XL pipeline, the North Dakota controversy has received much less attention from the media and major environmental groups.

Democracy Now! said it is now consulting with the Center for Constitutional Rights and lawyers in North Dakota. CCR’s legal director, Baher Azmy, told Democracy Now!, “This is clearly a violation of the first amendment … an attempt to repress this important political movement by silencing media coverage.”

The sheriff’s office said there have been 38 arrests associated with the protest.