PARIS, France — A motley, hungry crew assembled in a Catholic charity building in Paris for free soup last Tuesday night. But they weren’t homeless or needy, and the menu wasn’t that of your average soup kitchen: the soup was made from locally grown carrots with a delicate crème fraîche and shaved chestnut finish, the side dish was brie, and the dessert was fresh fruit. They were climate activists from all over the world, and they were hungry because they had been fasting all day as a form of protest for climate action.

The breaking of the fast was organized by the Fast for the Climate, a global movement, and Bon Pour le Climat, a French organization that helps chefs develop climate-friendly menus.

On the first day of every month, 10,000 people worldwide participate in the grassroots fast for the climate. The movement dates back two years, to the beginning of the U.N. Climate Conference in Warsaw (COP19) in 2013. Typhoon Haiyan, the strongest storm to ever make landfall, hit the Philippines at the beginning of the talks. Yeb Saño, then the chief climate negotiator for the Philippines, gave a tearful speech noting that climate change is causing more intense typhoons, and he began a fast.

“I was compelled to describe what was unfolding in my country,” recalls Saño in an interview with Grist. “And in the same breath, quite spontaneously, I declared that, in solidarity with people back at home who were struggling to find food — and I knew that my own brother was in the heart of devastation in Tacloban City, I wanted to stand in solidarity with him because he was hungry, weary, and thirsty — I thought it would be my responsibility to fast so that I could pay homage to them, including the thousands of people, millions of people, who were being impacted at that time.” Saño fasted for the entire 13 days of the Warsaw conference. 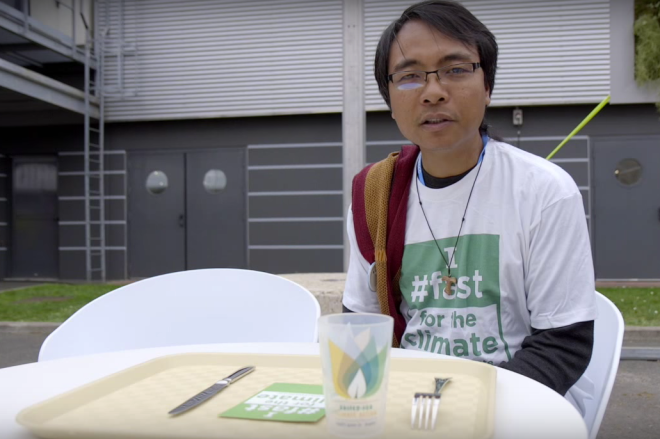 The fast took off, garnering media coverage and exciting colleagues and activists. “In Warsaw, when I was fasting, I realized that 300 other people had started to fast with me, inside the [conference center]: both negotiators and civil society, and young people, and mostly also the delegates from faith communities, and thousands of others in universities and communities around the world during that time,” says Saño. “I resolved to continue the fast at least once a month.”

Friends from international progressive and environmental organizations, both religious and secular, such as the Lutheran World Federation and the Climate Action Network, suggested continuing that momentum by publicly encouraging supporters to join Saño in fasting one day per month after the conference ended.

Fasting has long been a tactic deployed by activists for disempowered movements with desperately urgent causes. (You won’t see any negotiators from the U.S. or other rich, powerful countries fasting at the climate talks in Paris this week, not even if another Hurricane Sandy inundates New York City.) It’s a way to put a political cause on the plane of an exalted moral crusade, to get attention, and to shame the powers that be. It’s a tool for those without the money or guns to get their way through other means.

But for many of the Fast for the Climate participants, it’s more like a private religious sacrament than a public hunger strike. Just as Catholics fast for Lent to remind them how Jesus suffered, today people fast for the climate to feel connected to the climate-threatened.

“The hunger pains remind me that I’m part of a larger movement,” says Jeff Buhse of Winnipeg, Manitoba, who is at COP21 in Paris as an official through the Lutheran World Service. “For me, it’s a physical reminder of climate justice.”

Insofar as it’s a public-facing movement, fasting for the climate serves to highlight the often-overlooked importance of food-system reform as a way of fighting climate change. Not only do we need to transition away from eating so much meat, transporting food long distances, and factory farming, but we need to push back in a broader sense against rampant wastefulness and consumerism. “It’s not just that we have to lower emissions,” says Buhse. “It’s changing the way we consume.”

Saño is now a full-time climate justice activist outside of government. He has continued to find innovative forms of protest. This year he walked all the way from Rome to Paris, leading a “People’s Pilgrimage” to the climate summit. Just as Gandhi fasted and the civil rights movement had the Selma-to-Montgomery marches, so the climate movement is turning to these tactics to force the economic and political powers to reckon with them.

The breaking of the fast in Paris allowed climate fasters from all over the world to meet and make their personal practice of austerity a communal celebration to strengthen their resolve. And, for what it’s worth, the soup was delicious.

Shipping is a big contributor to climate change. So why is it being left out of the Paris deal?