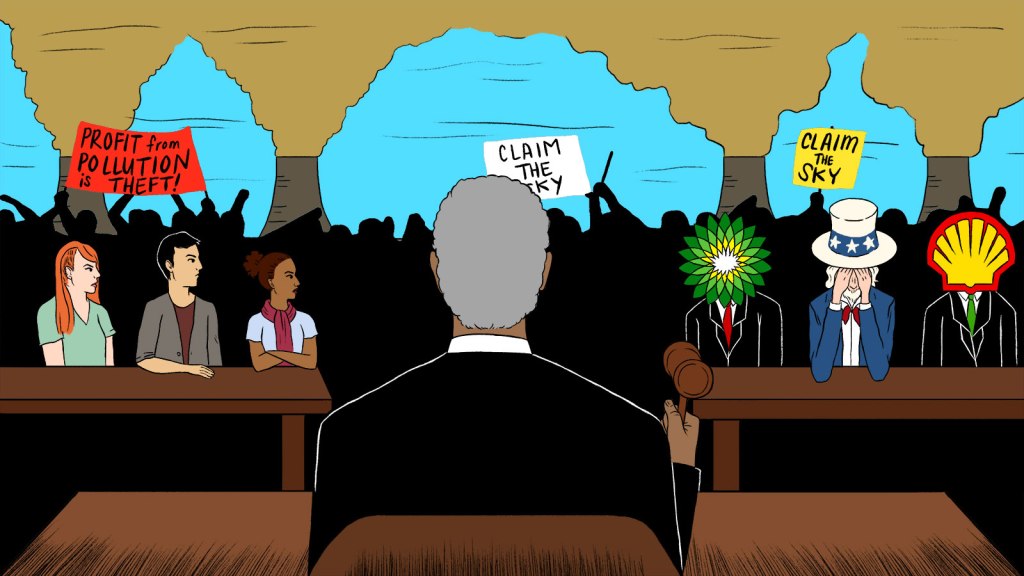 Grist / Amelia Bates
If it weren't for those meddling kids ...

Those feisty, litigious climate-hawk kids just won’t go away. Back in 2011, we wrote about a group of witty whippersnappers that filed a lawsuit against the federal government. The premise: The government must take action to protect the atmosphere for future generations.

On Oct. 3, those same five teenagers, represented by Oregon-based nonprofit Our Children’s Trust, filed a petition with the U.S. Supreme Court asking for a legal lifeline to keep the case alive.

Let’s be clear: The petition is a crazy longshot. The Supreme Court grants about 1 percent of such petitions, leaving the decisions of lower courts to stand without review in the other 99 percent of cases. And in this case, the lower court ruled against the teens: The U.S. Court of Appeals for the D.C. Circuit found in June of this year that there is no “federal constitutional foundation” for the suit — protecting natural resources is a matter of state law.

So, even while trying to push its federal case to the Supreme Court, Our Children’s Trust is also now pursuing similar legal action in every state of the union. And the basic idea behind the kids’ lawsuits — that the government must protect the atmosphere as it would other natural and cultural resources — has the potential to change how we think about ownership of nature and the climate crisis. Ecological economist Bob Costanza even coined a catchy name for it: “claim the sky.”

This all officially kicked off on May 4, 2011, when the youth-and-lawyer team sued the government for not looking after our atmosphere, employing a well-established legal principle called the public trust doctrine. Public trust law — the idea that governments must safeguard certain critical natural systems from significant harm, such that we and our descendents can continue to benefit from them — dates back to ancient Roman civil law and can be traced through the Magna Carta to today’s federally managed forests, parks, and waterways. Applying the principle to the climate, however, is a relatively new experiment, called atmospheric trust litigation.

When Our Children’s Trust first filed its federal suit, the plaintiffs were hopeful that the court might heed their request for immediate action to tackle an impending crisis that worsens with each day of inaction. Three litigious years later, the tortuous legal process has not obliged. But the plaintiffs believe previous rulings to throw out the case were erroneous; now they’re hoping for some justice from the highest court in the land.

Yet even if the justices do choose to take this case and rule that the federal government does in fact have to protect nature as a public trust, the litigation still won’t be resolved. The case would then return to the lower U.S. Court of Appeals to determine whether the atmosphere is included in that responsibility.

These kids may be bigger underdogs than native species in a changing climate or local booksellers in the age of Amazon, but don’t despair. The campaign to claim the sky is just getting started.

Our Children’s Trust has actually had some limited success in its state-level lawsuit in Oregon. An Oregon trial court initially tossed the suit out, but in June, the state’s Court of Appeals reversed that ruling, declaring that the trial court has to consider the case on its merits and determine whether safeguarding the climate is part of the state’s public trust obligation. The kids in the federal case can only hope that SCOTUS sees it like the Oregon judges. This case got some national publicity last month when one of the plaintiffs — an 18-year-old walking across the country as part of the Great March for Climate Action — appeared on Bill Moyer’s TV show.

In another state case brought by youth, a Texas judge found back in 2012 that the atmosphere and air are public trusts, but still hasn’t made the state’s environmental agency write new rules to defend these resources.

Andrea Rodgers, an attorney working on atmospheric trust litigation in Washington state, says progress is slow not only because the legal process is so convoluted. So far, judges don’t want to be the ones who decide how (or even if) a state must address climate change.

“Most of the courts … have ruled that the judiciary doesn’t have a role in the climate change debate,” she says. “They’ve ruled that it’s a political question.”

Rodgers adds, “Judges are very leery to step in and make sure that the state legislatures are fulfilling their responsibility.”

So, since we don’t have much time to dawdle when it comes to reducing emissions, it’s fair to ask: Is this drawn-out atmospheric trust thing even useful? A number of legal scholars and climate strategists think so.

Underneath all the legal muck, there’s a new framework for thinking about climate change. We all own the atmosphere, so stop treating it like a waste dump, dammit!

Costanza, a professor at the Australian National University, recently wrote that the “claim the sky” slogan represents more than just using the legal system. “Claim the sky” has the potential to become a rallying cry for climate advocacy, a new way for the public to pressure lawmakers. Sure, the courtroom battles are important, Costanza told me, “but you also need the civil society movement and activity like the climate march just to keep things moving. And you need the government involvement.”

Author-activist Naomi Klein, whose new book is all the rage in climate circles, recognizes the power in mass movements, even when it comes to affecting the judiciary. She contends that “the courts, too — however much they may claim to be above such influences — are inevitably shaped by the values of the societies in which they function.”

Rodgers points to the movements for civil rights and gay marriage as evidence that what the citizens deem to be just and unjust can shape how judges apply the law. And framing the legal question of who should be held accountable for fixing the climate around future generations — that is, the children — could be just the spark that the climate movement needs.

“In a way, this is our next civil rights movement,” she says. “These are kids whose right to a healthy and livable future are being denied.”

And the legal action could go beyond suing governments to demand they implement climate recovery plans. The litigation plan described by legal scholar Mary Wood, who quite literally wrote the book (reviewed here) on protecting the environment through public trust law, also involves suing the heck out of fossil fuel companies. As Wood explains, “Corporations that pollute the ocean through accidental spills, for example, are held accountable for natural resource damages. The same principle can extend to the atmosphere.”

Some law aficionados got excited about climate change-related suits last year when a study published in the journal Climatic Change found that just 90 companies are responsible for two-thirds of human-caused emissions. But Grist’s own Ben Adler served up some real talk about the limits of such a strategy in the United States: Legal experts say citizens can’t sue companies over their greenhouse gas emissions in U.S. federal court, and even if they could, proving that one company’s emissions caused some particular harm would be impossible.

Yet law experts Andrew Gage and Michael Byers are hopeful that the tide might soon turn. They recently published a piece called “Why climate litigation could soon go global” in The Globe and Mail:

So far, the fossil fuel industry has successfully opposed litigation for climate damages, brought in the United States by victims of hurricanes and sea level rise. But new areas of litigation often fail at first; in the 1980s, tobacco companies were still boasting that they “have never lost a case to a consumer, have never settled, and do not expect that picture to change.” As the tobacco industry learned, changes to the interpretation and application of laws sometimes occur quite rapidly.

Granted, Gage and Byers are talking about holding the fossil fuel industry accountable, not governments. But, as climate chaos draws closer, atmospheric trust litigation could serve as added legal pressure to hold some entity accountable for climate change.

“There’s no silver bullet, but I think there’s a silver shotgun,” says Costanza. We’d prefer a less violent analogy, but “claim the sky” is certainly a handy shell for holding together our climate-action ammunition.

As Maya Angelou once wrote, “A free bird … dares to claim the sky.”