These 3 cities are fighting for a clean-energy future - Grist 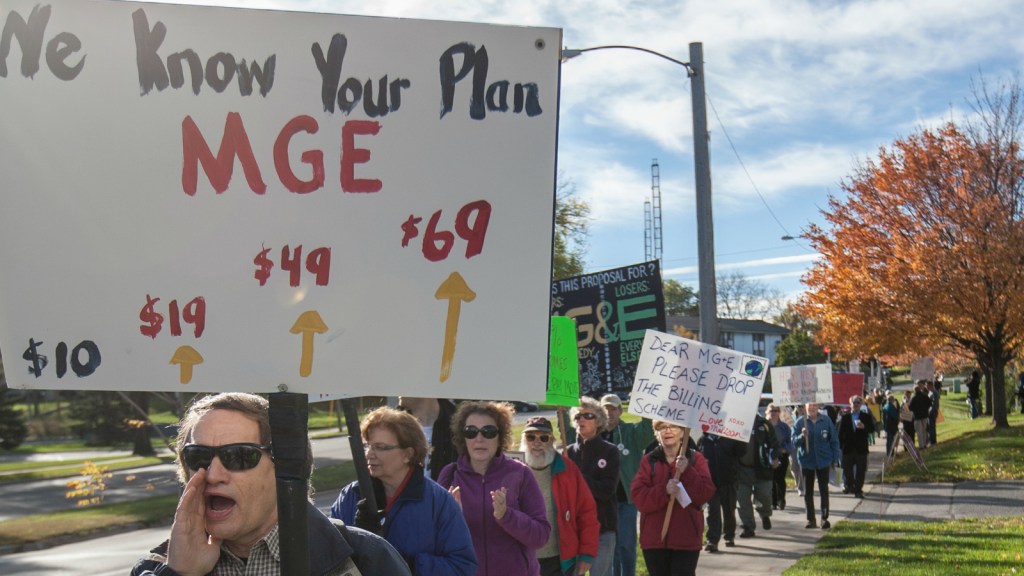 These 3 cities are fighting for a clean-energy future

There is a national war underway on electric consumers, and Madison, Wis., is on the front lines.

Last year, Madison Gas & Electric (MGE) proposed cranking up the mandatory fixed charges on electric and gas bills. The net result would be to raise bills for low-income and elderly customers, penalize customers who save energy or go solar, and block the innovation that is sweeping through the world of energy.

The reaction was swift. Customers took to the streets to protest, and the city council lawyered up to oppose the billing scheme. But still the Scott Walker–appointed state utility commission rubber-stamped the proposals.

To get some perspective on the issue, RePower Madison, the local citizen group, asked me to look at what was happening in other cities. I lived in Madison in the late ‘90s, graduating from the LaFollette Institute with a degree in energy policy. Since then I’ve worked to promote clean energy across the country.

Boulder, named by Outside magazine as the best sports town in America, is also chock-full of energy and climate experts who work at federal laboratories in the area.

When Boulder adopted its climate action plan in 2002, the city thought its utility, Xcel Energy, would help. It turns out the executives at Xcel didn’t understand that Boulder was really, really serious about climate change. Xcel made progress, but not quickly enough, so Boulder citizens decided to take matters into their own hands.

After three local ballot initiatives, and years of legal battles and engineering studies, Boulder is poised to create its own municipal utility. By 2017, Boulder Power & Light will be up and running, if all goes as planned.

Meanwhile, the good folks of Minneapolis also had a climate plan. But with much of their global warming pollution coming from the electricity and gas sold by Xcel and CenterPoint Energy, and with the state utility commission in charge of regulating utilities, there was little that city leaders could do. Until Xcel’s franchise agreement with the city came up for renewal, that is. That contract allows utilities to run their poles and wires down city-owned streets, usually for a modest fee.

Minneapolis activists, looking at Boulder, wondered if this was the time to consider other options, and started the Minneapolis Energy Options campaign. This led the city to commission a study, which recommended that collaboration might be the most fruitful option, rather than the kind of hostile takeover Boulder was pursuing.

Hence the Clean Energy Partnership was formed, and utilities are working out new programs and policies with the city to reduce pollution, help low-income neighborhoods, and boost the local economy. While it is too soon to see results, they are all playing “Minnesota nice” for now.

Back in Wisconsin, no one is playing nice.

MGE’s proposal to impose huge mandatory charges is part of a national strategy by utilities to head off innovation that threatens their business model. Solar power, energy-efficient lighting and appliances, and smart technologies like the Nest “learning” thermostat enable customers to buy less power, which reduces utility revenues.

The Edison Electric Institute, a utility trade group, is leading a counterattack, encouraging utilities to impose higher fixed charges that would discourage customers from buying less energy, and ensure that utilities keep getting paid even if they do.

It’s a win-win for utilities, and a lose-lose for customers.

This short video explains the impact of fixed charges:

Wisconsin is the front lines of this war. While most state regulators have rejected such onerous proposals, they were actively encouraged by the Wisconsin Public Service Commission. All the regulated utilities in the state are asking for, and getting, increases in fixed charges.

Now Madison leaders and citizen activists are looking to Boulder and Minneapolis for inspiration and ideas for next steps.

“That stuff in Minneapolis and Boulder is exciting,” Madison Alder David Ahrens told me. “It’s clear that the state won’t help us. The only matter is to what degree they will cripple all efforts at the local level.”

“Today in Wisconsin, the responsibility for promoting clean energy has become the domain of cities,” pointed out Madison Mayor Paul Soglin.

To Mitch Brey, organizer for Repower Madison, the bottom line is simple: “The future shouldn’t be left up to utility executives, since it really affects everyone’s lives.”

This piece is adapted from Empowered: A Tale of Three Cities Taking Charge of Their Energy Future, by Bentham Paulos, and published by Midwest Energy News. Available in paperback from Lulu and in e-book from Amazon.